Times Insider delivers behind-the-scenes insights into how news, features and opinion come together at The New York Times.

“Can you keep a secret?”

The voice on the phone belonged to Senator Lindsey Graham, the South Carolina Republican who sits on the Senate Armed Services Committee. The secret was that he was organizing a bipartisan congressional research trip to go into Syrian territory held by the Syrian Democratic Forces (S.D.F.), a Kurdish-led militia that is a primary ally of the United States fighting on the ground against the Islamic State. The delegation would tour prisons where the S.D.F. is warehousing captive ISIS fighter suspects from nearly 50 countries, raising a dilemma to which he believes the world needs to pay more attention: What should happen to them?

Plans for such a sensitive trip are kept quiet to avoid tipping off militants about a potential target, but I had a reason to know about them: Senator Graham was inviting me to travel with the group and write whatever I saw fit about what we would see. This was a unique opportunity: The Kurds normally do not let journalists tour their ISIS fighter prisons.

I have been writing about legal and policy problems related to the government’s handling of captured terrorism suspects for 15 years — for three newspapers and in two books — ever since I made my first of many reporting trips to the American wartime prison at Guantánamo Bay, Cuba, in 2003.

I was hooked after picking up my first detention scoop on that trip: The Bush administration had quietly decided to build a permanent, concrete-walled prison at the base to replace the open-air cellblocks the military erected the previous year to hold hundreds of men largely captured in Afghanistan and Pakistan. The move signaled that its almost off-the-cuff decision to bring hundreds of terrorism suspects to Cuba — claiming it could hold them in indefinite wartime detention without trial — was hardening into a long-term policy.

Prisoner-of-war-style detention until the end of hostilities developed during wars between uniform-wearing armies as a humanitarian alternative to slaughtering enemy captives in order to prevent them from returning to the battlefield. When the Bush administration claimed after the Sept. 11 attacks that it could hold certain terrorism suspects that way, it raised novel issues.

Traditional wars end, after which P.O.W.s go home. But the conflict with Al Qaeda and its morphing, splintering progeny is open-ended, meaning life imprisonment without trial. Still, the Supreme Court upheld the practice in 2004.

As the years passed and the costs and headaches of indefinitely imprisoning large numbers of men at Guantánamo accumulated, the Bush and Obama administrations tried to close the prison. Today, of the roughly 780 men who were brought there, only 40 remain. But it proved to be tremendously difficult, bureaucratically and politically, to let captives go: Any transfer creates some risk and the opportunity for blame.

The government’s policy in more recent years has been to prosecute terrorism suspects in civilian courts — winning long sentences to keep them locked up in a legally stable way — or to avoid taking custody of them in the first place; the Pentagon opposes getting more deeply back into long-term detention — especially for rank-and-file nobodies. This is why the Trump administration has yet to bring any new detainees to Guantánamo, for all its rhetoric about filling it back up.

Still, even President Obama was unwilling to abandon wartime detention power: His idea for closing the prison, before Congress blocked it, was to move several dozen detainees who were deemed untriable but too dangerous to release to a different prison for continued detention. Human-rights advocates have relentlessly shamed the United States for that approach, espousing the generally European view that terrorism suspects should be prosecuted or released. Yet many European nations are now themselves effectively using wartime detention to solve their ISIS citizens problem — by outsourcing imprisonment to the Kurds.

Curious to see how the S.D.F. was handling that burden, I applied for a visa to travel to Iraq and then linked up with the congressional delegation — Senator Graham; Senator Jeanne Shaheen, Democrat of New Hampshire; and several aides — on a connecting flight from Istanbul. At the Baghdad airport, we were ordered to put on helmets and body armor and then driven in a convoy to the American embassy compound, a bland campus littered with concrete “duck and cover” shelters in case of incoming mortar fire.

The next morning, a military plane flew us to an airstrip in northern Syria, where we were met by a Special Operations team that would shuttle us around via armored vehicles and helicopters. We went first to Manbij — an Arab town that the S.D.F. liberated from the Islamic State in the fall of 2016 and from which the Turkish military now wants to oust the Kurds — walking through a now-thriving-again market and meeting with local leaders. After stopping at a remote Special Operations base, we traveled to the two prisons I described in my article.

For someone who usually works out of a cubicle in Washington — talking with people over the phone or coffee, watching congressional and court hearings, and reading legal documents — it was a very unusual work day. At the same time I was acutely aware that this quick in-and-out, within the bubble of the physical security the American military was providing for the senators, was nothing compared with the sustained risks taken by my colleagues who routinely go into war zones without such protection to tell the world what is happening there.

Some Pentagon officials had not been thrilled about having a reporter along for a congressional trip that was already a big responsibility. Even as I was boarding the plane to the Middle East, Senator Graham later told me, the military bureaucracy had tried to avoid taking me to a prison site by abruptly saying there would be room in a planned convoy for each lawmaker to take just one aide. Only after he declared that his second spot would go to me, the senator said, had they grudgingly added more vehicles.

As we were heading to the first prison, a military official told me I would not be permitted to take any photographs inside its walls. I leaned on my Guantánamo experience to appeal to Lt. Gen. Paul E. Funk II, the commander of the coalition forces fighting in Iraq and Syria, who was accompanying the delegation. I explained to him that at Guantánamo the military permits journalists to take photographs inside the prison so long as detainees’ faces are not visible, and he agreed to switch to “Guantánamo rules.”

As it turned out, there was no way to take any shots of the ISIS detainees from our vantage point outside a cell that would not show their faces. But being able to take other pictures inside the compounds was helpful for remembering details, and a few were decent enough that The Times published them — one on the front page. As colleagues ribbed me about my photojournalism skills, I jokingly vowed never to write again.

That evening, the group flew back to Baghdad. In the embassy mess hall, we talked over what we had seen. And after flying home, I continued to report out the piece. I learned more about why some European governments are reluctant to take their citizens back from the S.D.F.: In part, it is because they fear they will not be able to successfully prosecute them all or win sufficiently lengthy sentences under their legal systems.

What are the alternatives?

Could there be an international war-crimes tribunal? There would be many obstacles to setting one up.

Could Iraq take them? Its government is dealing with ISIS suspects arrested on its soil by handing down death sentences after 10-minute trials, but it appears to have neither the desire nor the legal ability to prosecute non-Iraqis captured in Syria.

Could the S.D.F. just keep them? If it holds onto its territory, perhaps other countries would end up paying it to continue imprisoning their citizens. But if the S.D.F. falls in the next phase of the war, detainees might break free in the chaos, with some potentially spreading new mayhem around the world. And what if the Kurds make a deal with the Assad regime? Would it take over the prisoners, and murder them all?

The uncertainty had me reflecting on something Senator Graham said several times during the trip: “Seventeen years after 9/11, we still haven’t figured this out.” 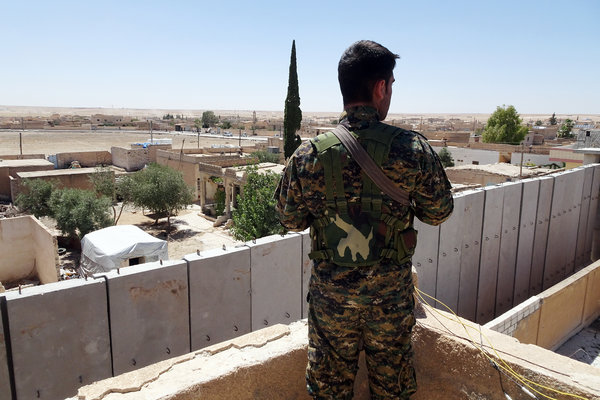 Keep up with Times Insider stories on Twitter, via the Reader Center: @ReaderCenter.

Charlie Savage is a Washington-based national security and legal policy correspondent. A recipient of the Pulitzer Prize, he previously worked at The Boston Globe and The Miami Herald. His most recent book is “Power Wars: The Relentless Rise of Presidential Authority and Secrecy.” @charlie_savage • Facebook