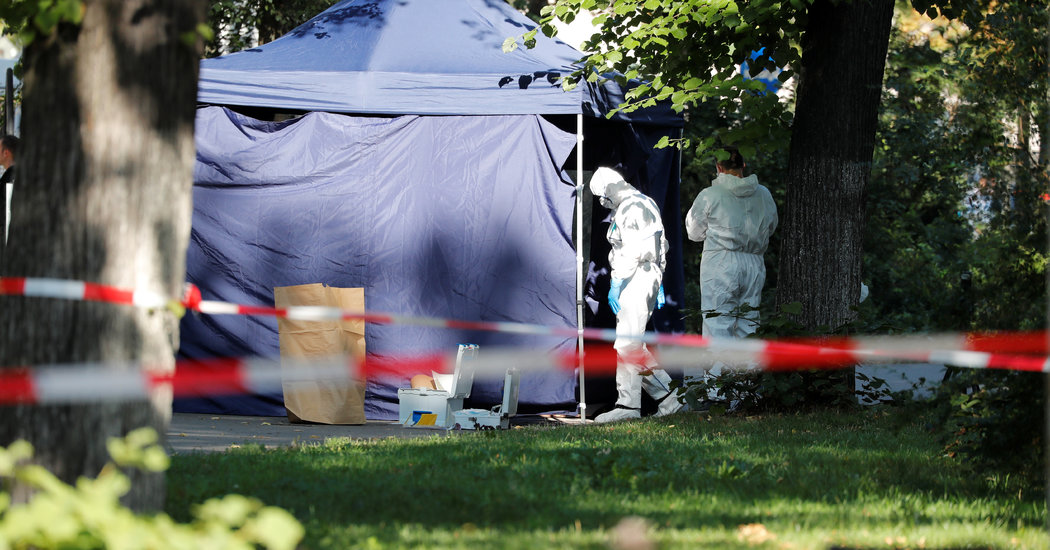 BERLIN — The German authorities declared on Wednesday that Russia was suspected of being behind the daylight assassination in Berlin this summer of a former fighter with Chechen separatists, and also expelled two Russian diplomats, adding new strains to relations with Moscow.

The announcement deepened concerns about Russian contract killings in Europe, after last year’s nerve agent poisoning of Sergei V. Skripal, a former Russian spy who was living in Britain. German lawmakers called for a joint European response to the killing in Berlin.

Peter Frank, Germany’s federal prosecutor, said he would take over the case. Investigators have identified the killer as Vadim Krasikov, who is believed to be a Russian contract killer. The suspect has been in custody since August; he was detained by the police hours after witnesses said they had seen him ride a bicycle up to the victim and shoot him once in the torso and twice in the head before fleeing the scene.

Although the authorities initially considered Russian involvement, it was only in recent weeks that sufficient evidence was gathered to back those suspicions, Mr. Frank said in a statement. The additional evidence elevated the killing of the former fighter, a Russian-Georgian citizen identified by prosecutors only as Tornike K., from a simple murder case to a state security threat.

“There are sufficient, real indications that the killing of Tornike K. was carried out either on orders by the officials in the Russian Federation or those in the autonomous Chechen Republic, as part of the Russian Republic,” Mr. Frank’s office said in a statement.

The victim was previously identified by the German authorities as Zelimkhan Khangoshvili, a former commander of a Chechen separatist force whom the Russian state news media has depicted as a terrorist.

The prosecutor cited photographs of the suspect that matched images of a Vadim K. who had been sought by the Russian authorities over a 2013 murder in Moscow that was also carried out by an assassin on a bicycle. The Russian authorities later withdrew the warrant, although the investigation remained open, German prosecutors said.

Immediately after the announcement, the foreign ministry in Berlin ordered two diplomats stationed at the Russian Embassy expelled, citing Moscow’s unwillingness to cooperate with the investigation.

The Russian Foreign Ministry in Moscow pledged to take measures responding to the expulsion. Russian lawmakers said they expected a tit-for-tat response. The Foreign Ministry’s spokeswoman, Maria Zakharova, denounced what she called Germany’s “politicized approach” to the murder investigation.

“We view the German claims regarding the expulsion of two employees of the Russian embassy in Berlin to be groundless and unfriendly,” Ms. Zakharova said, according to Russian news agencies. “We will be forced to implement a set of measures in response.”