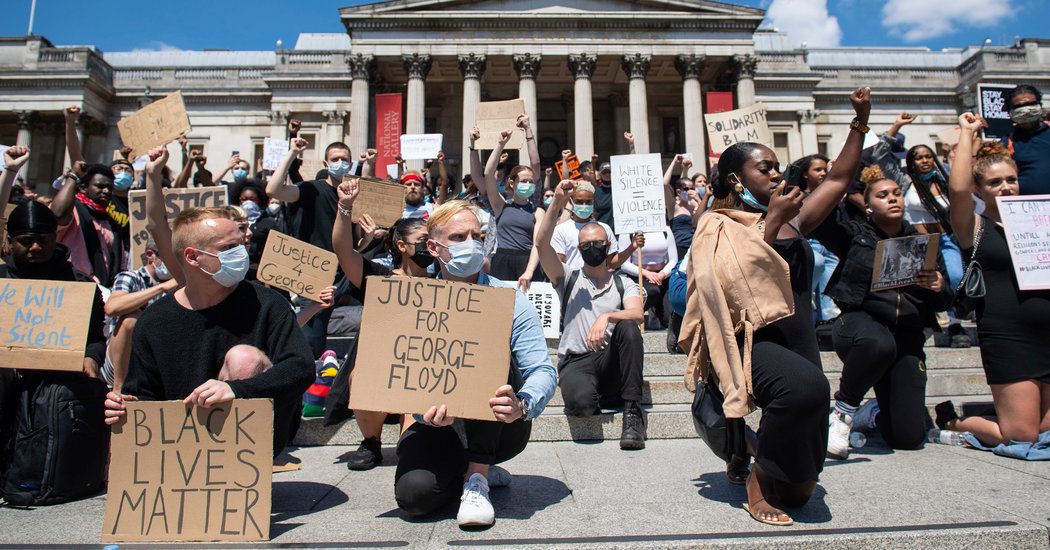 In many parts of the world, the death of yet another black man at the hands of the police in the United States is setting off mass protests against police brutality and reviving concerns that America is abandoning its traditional role as a defender of human rights.

On the streets of London and Toronto, in halls of power in Addis Ababa and Beijing, a broad chorus of criticism has erupted alongside the unrest in the United States over the death of George Floyd. Mr. Floyd died last week after he was handcuffed and pinned to the ground by a white police officer in Minneapolis.

In Vancouver, thousands of demonstrators marched through the streets with signs reading, “Black Lives Matter.” In Berlin, newspapers published photos of Derek Chauvin, the former police officer charged in the death of Mr. Floyd, calling him “the killer-cop” who “set America ablaze.” In Lebanon, activists flooded social media sites with messages of support for protesters in the United States.

The widespread condemnation reflects growing unease about America’s rapidly eroding moral authority on the world stage. President Trump already faces criticism across the globe for his response to the coronavirus pandemic that has pushed the United States to relinquish its longtime role as a global leader in times of crisis. Even some of America’s closest allies have shown increasing opposition to his agenda.

The death of Mr. Floyd has brought protests to at least 140 American cities, turning many into tear gas-filled battlefields. Images of police officers and protesters engaged in heated street fights have spread swiftly across social media sites around the world, drawing furious comments and calls for action.

The tensions have also given American rivals an opportunity to deflect attention from their own problems.

In China, the state-run news media heavily featured reports about Mr. Floyd’s death and portrayed the protests as another sign of America’s decline.

When an American official on Saturday attacked the ruling Communist Party on Twitter for moving to impose national security legislation to quash dissent in Hong Kong, a spokeswoman for the Chinese government fired back with a popular refrain among protesters in the United States.

“‘I can’t breathe,’ ” the spokeswoman, Hua Chunying, wrote on Twitter.

In Iran, Javad Zarif, the foreign minister, accused the United States of hypocrisy. He posted a doctored screenshot of a 2018 statement by American officials condemning Iran for corruption and injustice. In his version, the references to Iran were replaced with America.

The head of the African Union Commission, Moussa Faki Mahamat, said in a statement on Friday that Mr. Floyd’s death was a murder, and he criticized the “continuing discriminatory practices against Black citizens of the United States of America.”

After a weekend of protests in London, Jerusalem and elsewhere, activists around the world have vowed to continue to organize rallies and speak out about Mr. Floyd’s death in the coming days. In many places, demonstrators are taking direct aim at Mr. Trump and his policies. They are also raising concerns about police brutality in their own communities.

Holding signs and clapping their hands, hundreds of protesters gathered in Trafalgar Square in London on Sunday in defiance of stay-at-home restrictions in effect across Britain to fight the coronavirus. They chanted “I can’t breathe,” “black lives matter” and “no justice, no peace” before crossing the Thames to march peacefully to the United States Embassy.

In Berlin, hundreds of protesters gathered outside the American Embassy, some holding signs saying, “stop killing us,” Reuters reported.

In Germany’s top soccer league, two players — the English forward Jadon Sancho and the French striker Marcus Thuram — made references to the killing of George Floyd as part of goal celebrations during matches on Sunday.

The unrest in the United States has prompted activists from around the world to offer advice to American demonstrators on how to keep the movement alive. In Lebanon, a group of activists compiled a document they titled “From Beirut to Minneapolis: A protest guide in solidarity” as a guide for documenting state abuses and escalating demonstrations.

In Australia, where rallies protesting racism are planned for later this week, the images of unrest have reignited debate about the country’s own troubles with police brutality.

While some Australians expressed appreciation for living far from the United States and its problems with race, others quickly pointed out that more than 400 Indigenous Australians have died in police custody since 1991, without a single police officer convicted of abuse.

The hashtag #aboriginallivesmatter was trending on Twitter on Monday, with many Australians expressing outrage and sadness about both the death of Mr. Floyd and the racism in their own country.

The family of David Dungay, an Aboriginal man who said “I can’t breathe” 12 times before he died while being restrained by prison guards in 2015, also said this week that they had been traumatized by footage of Mr. Floyd’s death, prompting them to call for another investigation into Mr. Dungay’s death.

And with tensions rising, Prime Minister Scott Morrison said Monday that while the video of Mr. Floyd’s death was upsetting and shocking, Australians should be careful not to adopt the destructive response seen in some American cities.

“I saw a good meme on the weekend,” he added. “Martin Luther King didn’t change anything by burning anything down or by looting any shops.”

To which many Australians quickly responded: You don’t understand Dr. King.

“What is with all these white people quoting MLK who’ve not read anything of King’s beyond a meme or seen anything beyond a 30-second YouTube clip of ‘I Have a Dream,’” said Benjamin Law, an Asian-Australian writer and essayist, on Twitter.