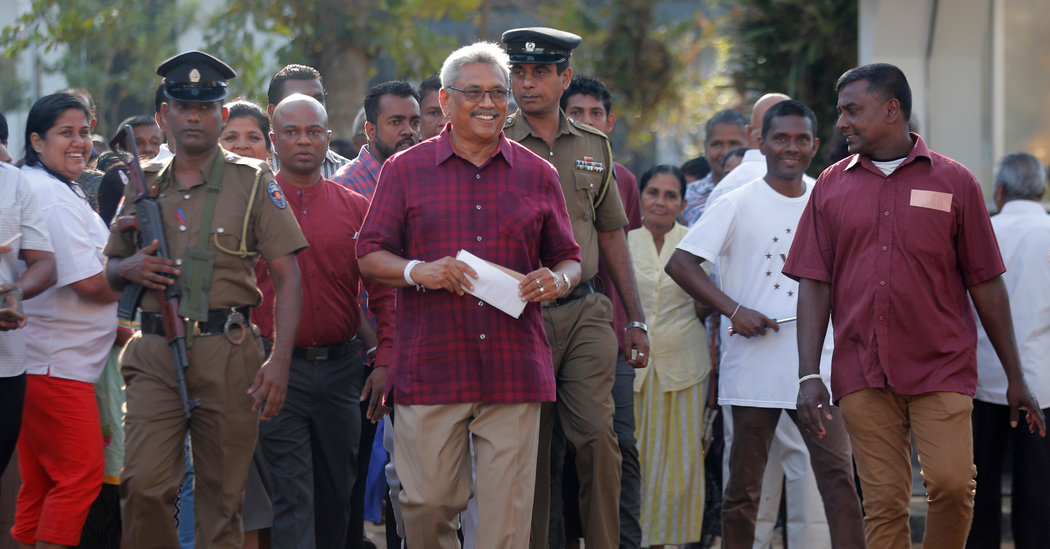 Mr. Rajapaksa defeated his closest opponent, Sajith Premadasa, by about 10 percentage points, according to an official tally from Sri Lanka’s election commission. His party expects him to be sworn into office early this week.

“As we usher in a new journey for Sri Lanka, we must remember that all Sri Lankans are part of this journey,” Mr. Rajapaksa wrote on Twitter in his first remarks about the victory. “Let us rejoice peacefully, with dignity and discipline in the same manner in which we campaigned.”

During the election, Mr. Rajapaksa, 70, a former wartime defense chief nicknamed “Terminator” by his family, capitalized on public outrage at the current government’s mishandling of intelligence reports warning of terrorist attacks in Sri Lanka, a lush island at the foot of India. In April, a Muslim militant group claiming loyalty to the Islamic State killed hundreds of people in coordinated suicide bombings at churches and hotels on Easter Sunday.

The attacks shattered a fragile postwar peace in Sri Lanka, where wounds still fester from the war with separatist ethnic Tamils during which thousands of people died. In 2009, Mr. Rajapaksa and his brother Mahinda Rajapaksa, then Sri Lanka’s president, ended that conflict, but they stand accused of crimes against humanity, including directing the bombings of civilian hospitals and torturing journalists.

During campaign speeches, Gotabaya Rajapaksa vowed to take a tough stance on terrorism as president and to bring stability to Sri Lanka, where a collapse in tourism after the bombings threw the economy into a tailspin. Many Sri Lankans struggling to make ends meet support the Rajapaksas in the hopes that they can revive the economy, which boomed toward the end of their stretch in power.

Others worry that democracy and freedom of speech will be curtailed under Mr. Rajapaksa, whose party, Sri Lanka Podujana Peramuna, is likely to appoint Mahinda Rajapaksa as the new prime minister.

It is not the first time the former president has sought the position. In October 2018, Sri Lanka’s departing president, Maithripala Sirisena, abruptly fired Prime Minister Ranil Wickremesinghe, calling him inept and corrupt, and then appointing Mahinda Rajapaksa to the position. Many considered the move a coup, and by the time the power grab was ruled illegal, two protesters had been killed.

But the Easter Sunday bombings and struggling economy were enough to allow another Rajapaksa to rise. Asanga Welikala, the director of the Edinburgh Center for Constitutional Law and an expert on Sri Lanka, said that Gotabaya Rajapaksa won this election by leveraging the same hard-line approach to national security and “social discipline” that has propelled populists to power around the world.

“This is a mandate that rejects reform, democratization, civil freedom and broad tolerance of pluralism,” Mr. Welikala said of the vote.

Mahinda Rajapaksa’s decade as president was known for tightly centralized power and the spread of a strident Sinhalese Buddhist nationalism that has inspired attacks against the country’s large minority communities. Hostility toward Muslims, in particular, has risen since the Easter Sunday attacks, heightening fears of retribution against innocent Sri Lankans.

And although the economy grew under Mahinda Rajapaksa, so did the country’s debt to China, whose influence in Sri Lankan affairs spiked under the family’s watch. A lopsided dependence on China for development projects was a key part of Mahinda Rajapaksa’s startling election defeat in 2015.

Since then, the country was forced to give up a port complex to China as the debt crisis battered the economy, though analysts said Gotabaya Rajapaksa’s government would most likely tread carefully with China this time around.

“Gota will play the China card, but Beijing is now less inclined to repeat the large financial investments it did five or 10 years ago due to growing domestic opposition and international scrutiny,” said Constantino Xavier, a foreign policy fellow at Brookings India in New Delhi.

Officials said turnout on Saturday, when 16 million eligible voters chose among 35 candidates, was more than 80 percent, and that Mr. Rajapaksa had won about 52 percent of the vote. The election was largely peaceful, though some violence was reported, including an attack on buses carrying Muslims to polling stations in northwest Sri Lanka. (There were no reports of injuries.)

Gotabaya Rajapaksa’s chief competitor, Mr. Premadasa, 52, whose father was killed during the war by a Tamil Tiger rebel, did well with minority Muslims and Tamils in conflict-torn northern and eastern provinces.

But Mr. Rajapaksa won big with a crucial voting bloc: Sinhalese Buddhists who make up around 70 percent of the Sri Lankan population and credit the Rajapaksa family for ending the war. Sunday morning, Mr. Rajapaksa’s supporters hugged and cheered outside his home on the outskirts of Colombo, the capital.

In a statement conceding defeat, Mr. Premadasa, of the United National Front, congratulated Mr. Rajapaksa, urging him to “strengthen and protect the democratic institutions and values that enabled his peaceful election.”