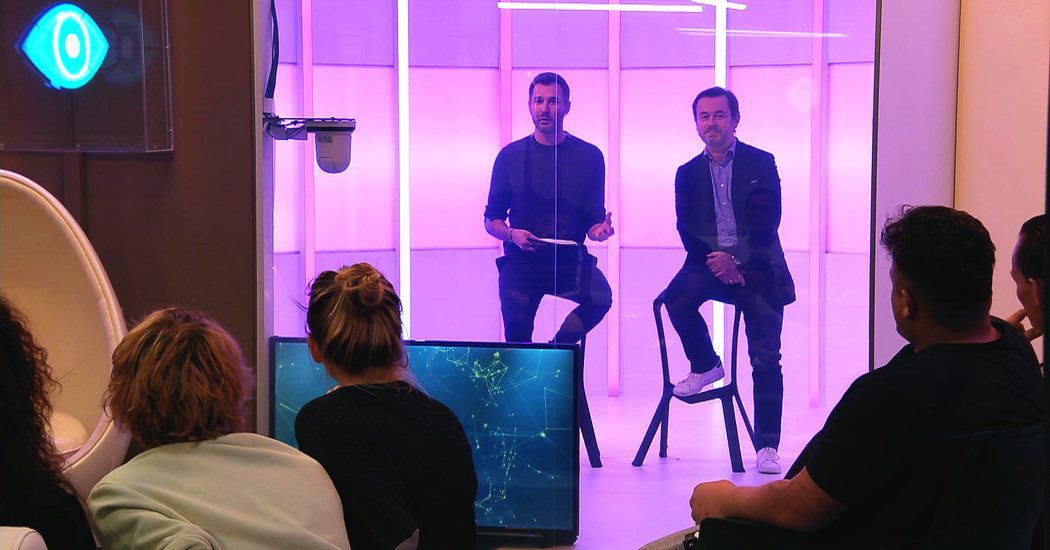 BERLIN — It has spread to every continent except Antarctica, brought the global economy to its knees and turned life upside down for millions of people. But, until Tuesday night, there was one lucky group of attractive, young people who knew nothing about the coronavirus pandemic.

After weeks of being cut off from the world, the contestants of Germany’s version of “Big Brother” were told about the unfolding crisis in a midseason live show on Tuesday night.

The TV show centers on 14 contestants confined to two adjacent houses for 100 days. They are filmed around the clock and gradually eliminated by viewer voting, with the winner taking home 100,000 euros (around $110,000). The current season began on Feb. 10, when most cases of the coronavirus were still in China.

Speaking from behind a sheet of protective glass, “Big Brother’s” host, Jochen Schropp, explained that “a disease called COVID-19 had spread across the world” and “reached Europe.” Contestants were then shown news clips of recent events, including footage of deserted streets in Italy and Germany. Most of the contestants watched in shocked silence. Several erupted into sobs.

Wiping away tears, one contestant, identified as Michelle, 26, explained that because she works as a geriatric nurse, she was particularly worried about her patients. Another, who works as a bartender, expressed concern about what the virus might mean for the country’s economy.

The show had gone on as usual in recent weeks, even as the pandemic upended life in Germany. On Monday night, Chancellor Angela Merkel announced sweeping measures to combat the spread of the virus, including shutting the country’s borders with France, Austria and Switzerland to noncommercial traffic, and forcing the closure of most shops.

As of Tuesday afternoon, 8,009 cases have been reported in Germany, a majority in North Rhine-Westphalia, the region where “Big Brother” is filmed.

Now that we live in the era of “social distancing,” the contestants’ closeness has seemed like a relic from a more innocent time. In an episode that aired Monday, two contestants were made to spend a full day chained to each other, as part of a challenge set for them by the show’s producers.

In another recent episode, male contestants took turns performing half-nude lap dances on a female participant. At a house party, one contestant drank sparkling wine out of another’s bellybutton.

While conversation throughout Germany, as elsewhere, has been dominated by discussions of the virus, the contestants’ discussions have focused on more banal topics, like dating, household chores and their sexual interests.

In an article on Thursday in the Sueddeutsche Zeitung newspaper, a spokeswoman for Sat. 1, the channel that broadcasts the show, was quoted defending the ethics of withholding information from the contestants. But the show quickly reversed course. In an email on Tuesday, Sandra Scholz, a spokeswoman in the channel’s press office, said the program’s policy had always been to inform contestants “anytime something this exceptional happens in the world.”

Contestants on “Big Brother” in Italy and Australia were recently told about the epidemic, and participants in Canada were informed after they noted the conspicuous absence of a studio audience during the segment of the show when contestants are eliminated.

“Big Brother” has had to grapple with similar dilemmas about news events in the past. In 2001, the American version of the program broke the set’s news blackout to inform its cast members about the September 11 attacks. One of the contestants, Monica Bailey, had a cousin died who during the attack.

Although four new contestants entered the German show on March 9 in a surprise twist, they were barred by producers from speaking about current events. The channel’s press office said in an email that all new arrivals had been screened for the virus, and that production staff had taken enhanced protective measures in recent weeks.

Scholz also explained that contestants would have access to a psychologist to help them cope with the news. Schropp, the host, was joined by a doctor to deliver the announcement on Tuesday night.

After an emotional question-and-answer session, the contestants were shown video messages from their loved ones, all of whom insisted they were healthy and urged the housemates not to leave the show. Gina, a bubbly contestant with bleached hair, was told by a friend that she was “not missing anything, because all the clubs and bars are closed.”

The partner of another contestant, Pat, urged him to stay in the house. It was, he added, “the best quarantine that exists.”