HONG KONG — He was the kind of 18-year-old high school student more interested in basketball than studying. One of four student vice presidents, who classmates say never showed an interest in politics until this year.

Friends described him as charming and funny, with long hair he sometimes kept in a ponytail. Just another student. Not an icon. Not a symbol. Not a lightning rod.

But on Tuesday, the student, Tsang Chi-kin, became all of those things when he was shot by the police during a day of violent protests in Hong Kong.

The shooting — the first time police officers in the semiautonomous Chinese territory used a live round against a demonstrator in nearly four months of protests — represented a new escalation in the violence that has roiled the city.

Mr. Tsang was shot in the chest. The hollow-point bullet narrowly missed his heart and spine, but pierced a lung. As of Wednesday, he was in intensive care but in stable condition, according to the Hospital Authority.

“He’s a very fortunate person, when you look at the organs that are there,” said Dr. Darren Mann, a Hong Kong surgeon and expert in ballistic injuries.

The teenager was one of many thousands of protesters who fanned out across Hong Kong on Tuesday and battled the police for hours through fogs of tear gas. The street brawls started just hours after Xi Jinping, the Chinese leader, presided over a carefully choreographed military parade in Beijing to celebrate 70 years of Communist Party control.

The shooting, which has been replayed for hours on local television news channels, has divided the city.

Supporters of the pro-democracy protests say the episode epitomizes all that is wrong with a Hong Kong government that has prioritized brute force over genuine political dialogue. The movement’s critics, on the other hand, say the shooting highlights the shameful excesses of a youth-led movement that has increasingly resorted to vandalism and attacks on police officers.

Seven friends of Mr. Tsang discussed the young man’s activities, but insisted on anonymity because they feared retaliation by the police or others if their identities were known.

Mr. Tsang, they said, was barely aware of politics until June when the first major protests against a bill that would have allowed Hong Kong residents to be extradited to the mainland for trial convulsed the city.

Starting this summer, Mr. Tsang played a leading role in a group of a dozen protesters from several high schools who attended protests together, his friends said. But a personal dispute last weekend led to a rift in the once tight-knit clique.

As a result, Mr. Tsang was with a half-dozen people at the protest on Tuesday in Tsuen Wan, a working-class neighborhood of residential tower blocks, when he was shot. Mr. Tsang and the other teenagers overlapped their open umbrellas to create a nylon wall as they charged the police, the friends said.

In a video of the shooting, brick-throwing protesters chase outnumbered police officers for about two blocks, until a small group of officers becomes separated. A protester who appears to be Mr. Tsang — wearing swim goggles and a gas mask and carrying a pool kickboard — is seen leading a handful of black-clad protesters who chase a riot officer and knock him to the ground. They kick the officer and beat him with what appear to be metal pipes.

When a different police officer approaches with a drawn handgun to rescue his colleague on the ground, the protester turns to him and strikes his trigger hand with a pipe. Instantly, the officer fires on the man at point-blank range. The protester falls, and is not treated for several minutes as the police watch for attacks, the video shows.

The Hong Kong police commissioner, Stephen Lo, said the officer who fired on Mr. Tsang had acted in a “legal and reasonable” manner, having given a verbal warning before opening fire. The officer had been assaulted at close quarters, Mr. Lo said, and had no other choice but to shoot. “The range was not determined by the police officer, but by the perpetrator,” he said.

Mr. Lo added that the police had arrested Mr. Tsang, but had not yet decided whether to press charges. On Wednesday morning, the principal and vice principal of the Ho Chuen Yiu public secondary school said that Mr. Tsang would not be punished and would keep his place in the school.

Some supporters of the police and Hong Kong’s pro-Beijing political elites urged the school to take a harder line.

“Could you not directly denounce his wrongdoing,” Leung Chun-ying, a former Hong Kong chief executive, wrote on his Facebook page on Wednesday. Before being shot, Mr. Leung wrote, Mr. Tsang had “beat the police on the streets in full gear along with other rioters.”

Joseph Cheng, a retired professor of political science at the City University of Hong Kong, said the shooting could turn Mr. Tsang into a powerful symbol for activists on either side of the protests.

In less than 24 hours after the shooting, Mr. Tsang was being hailed as a hero and derided as a thug.

“I don’t know if they were real thugs or students, but they all have been seriously brainwashed,” Junius Ho, a pro-Beijing legislator in Hong Kong, said in a video broadcast on Facebook Live.

Hundreds of people gathered in the upscale Central district at lunchtime on Wednesday. They chanted slogans and sang the protest movement’s anthem, “Glory To Hong Kong,” as a show of support for Mr. Tsang.

And in a further sign of anger over the shooting, thousands of protesters occupied major roads on Wednesday evening in several Hong Kong districts across the city. Some of them threw firebombs at a police station in Tsuen Wan. A poster circulating on social media had called for gatherings in eight places at 8 p.m. to honor “the wounded student.”

In the Causeway Bay shopping district on Hong Kong’s main island, protesters poured into a square in front of a shopping mall and sang the protest anthem, their voices reverberating in the mall’s cavernous open lobby. 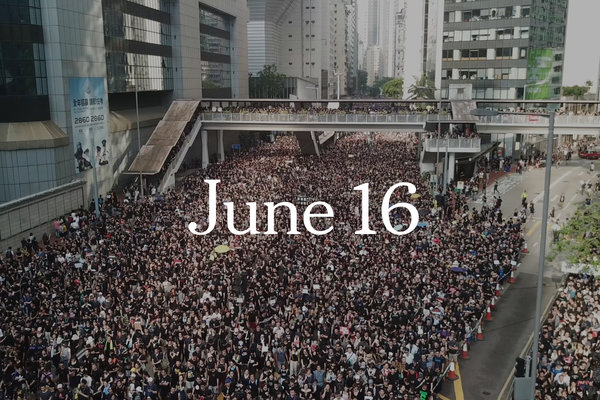 “When we saw the news yesterday about the student who was shot, you couldn’t imagine why the police why would do that,” said Max Lau, a 20-year-old university student who pumped his fist in the air and shouted along with the crowd. “Why would the police do this to our young people?

Mr. Cheng, the retired political scientist, said the shooting could propel Mr. Tsang to the kind of international prominence that Joshua Wong, a leader of the city’s Umbrella Movement in 2014, achieved at a similar age.

On Wednesday, a group of protesters lionized Mr. Tsang at a news conference they held at the base of a 30-story public housing block in Tsuen Wan. It was across the street from the public high school and not far from where he was shot.

A row of masked protesters sat at tables and discussed their friendship and admiration for Mr. Tsang. One of them, a student, denounced the police and called for further protests to honor Mr. Tsang, saying, “Please promise me that you will never forgive.”

But recent alumni of the school said in interviews that the housing project was mainly occupied by older families who were strongly pro-Beijing. And not everyone who heard the protesters supported their message.

At one point during the news conference, a drone buzzed high above the apartment tower and strafed the crowd below with rotten eggs.

More coverage
Why Are People Protesting in Hong Kong? 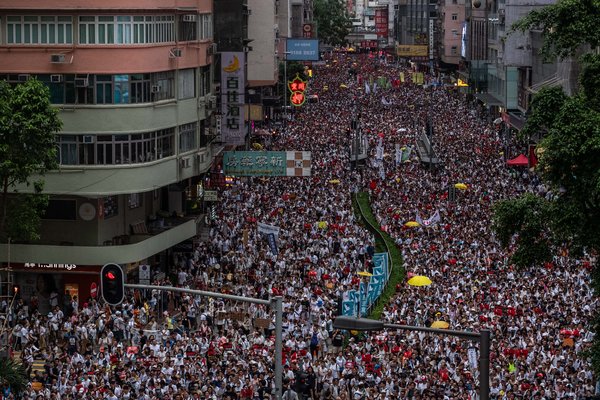 China’s Global Message: We Are Tough but Not Threatening 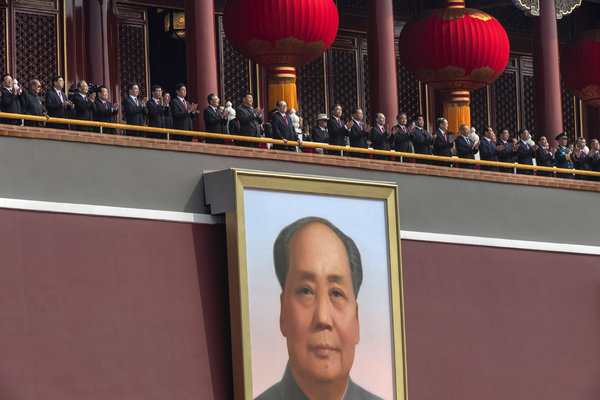 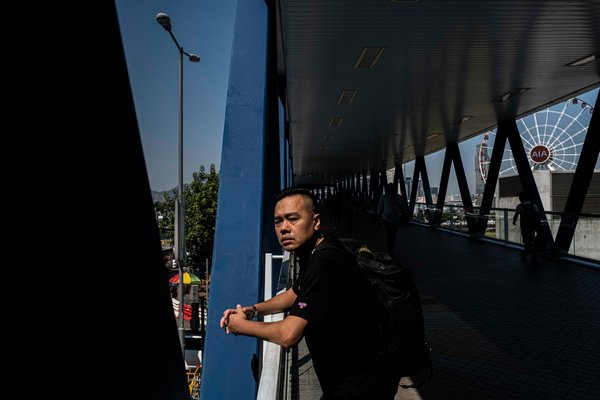