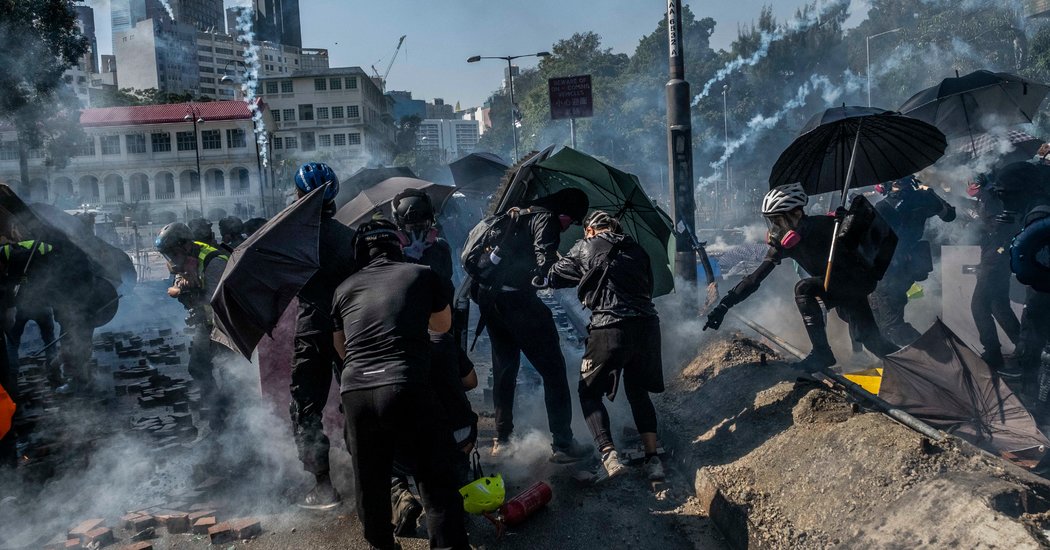 HONG KONG — The Hong Kong police on Sunday clashed for hours with antigovernment activists who were staging a siege-like occupation of a university campus and blocking a vital cross-harbor tunnel, the latest escalation in a monthslong crisis gripping the city.

The standoff at Hong Kong Polytechnic University, in which a police officer was hit in his leg with an arrow, shattered a fragile calm that had returned to the Chinese territory after a workweek marred by severe transit disruptions and street violence.

Schools across Hong Kong were canceled for Monday. And by Sunday evening — as protesters set fire to a pedestrian bridge near the tunnel, sending plumes of black smoke billowing into the sky — it seemed likely that yet another weekday commute would be snarled.

The Hong Kong protests began in June over legislation, since scrapped, that would have allowed extraditions to mainland China, and have expanded to include a broad range of demands for police accountability and greater democracy.

The police on Sunday fired gas and sprayed water cannons at young demonstrators who were continuing a multiday occupation of Hong Kong Polytechnic University and blockading an adjacent tunnel that connects Hong Kong Island with the Kowloon Peninsula.

The protesters, ensconced above the Kowloon streets in fort-like enclosures, spent hours throwing gasoline bombs, some from improvised catapults. Others stood guard, armed with catapults and bows and arrows.

Early on Sunday afternoon, the police drove an armored vehicle through roads near the PolyU campus where the protesters had dumped bricks and other debris to impede police vehicles. The authorities warned the public to avoid the area, and the police said that one officer had been hit in the calf with an arrow.

The campus, which sits beside a Chinese military barracks, is one of several that young protesters had occupied days earlier, turning them into quasi-militarized citadels. Most of the other sieges gradually tapered off.

The Sunday clash came on the heels of a particularly intense week of transit delays, street scuffles and flash-mob-style demonstrations across the city. The unrest was prompted in part by the police shooting of a young demonstrator at point-blank range. He survived.

On Saturday, Chinese soldiers jogged out of their barracks near Hong Kong Baptist University and cleared bricks from streets that had been swarmed days earlier by young demonstrators.

The soldiers wore T-shirts and basketball jerseys, rather than military uniforms, and carried brooms instead of weapons. Their appearance threatened to inflame tensions in the semiautonomous Chinese territory, where many are deeply sensitive about what they see as Beijing’s growing influence over their lives.

The Hong Kong garrison of the People’s Liberation Army is based in 19 sites once occupied by the British military before the former colony returned to Chinese control in 1997. But even though Chinese troops have been stationed in Hong Kong for years, it is highly unusual for them to venture into the city.

Hong Kong’s mini-Constitution says that P.L.A. forces “shall not interfere” in local affairs and that the local government may ask for the army’s assistance for disaster relief and maintaining public order. The Hong Kong government said in a statement on Saturday that the soldiers’ cleanup had been a self-initiated “community activity.”

The cleanup, which was lauded in China’s state-run news media, prompted a torrent of criticism from local residents. On Saturday, 24 lawmakers from Hong Kong’s pro-democracy legislative minority issued a joint statement saying that the local government and the P.L.A. had ignored restrictions imposed on the troops by local laws.