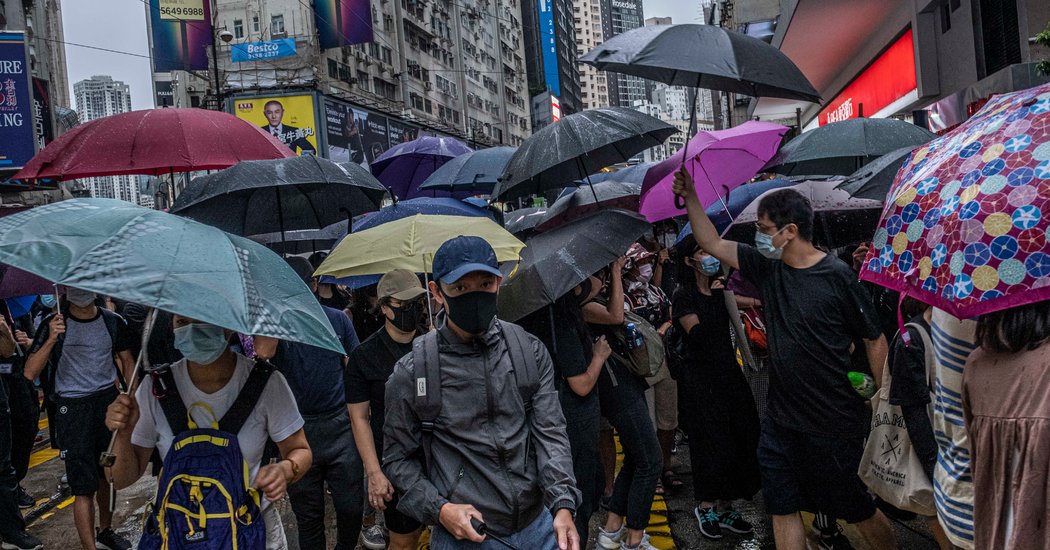 HONG KONG — A jittery Hong Kong was again engulfed by clashes between protesters and the police on Sunday, hours after tens of thousands of people marched in a largely peaceful show of force against a contentious ban on face masks.

Two large marches on Sunday afternoon were the first significant public gatherings since the ban took effect the day before, under a rarely invoked emergency powers law. Despite pouring rain, angry protesters turned out en masse, many on edge from the growing violence of the recent weeks and from patriotic celebrations around a politically important Chinese anniversary this past week.

The large marches and the widespread defiance of the ban were symbols of the staying power of the monthslong pro-democracy movement, and a test of the local government’s resolve and ability to stop its momentum.

Hong Kong’s leader, Carrie Lam, used a colonial-era law to try to isolate the hard-core activists at the center of recent street clashes with the police. She is under pressure to act after months of violence have strained the local economy and prompted concerns about intervention by Beijing. China’s ruling Communist Party has warned that it would consider using force to suppress the demonstrations.

The risk is that Mrs. Lam’s move could backfire, provoking moderate protesters and exacerbating a sense that officials are infringing on the civil freedoms that the semiautonomous territory has maintained since its return to Chinese control in 1997.

Jeannie Mok, a 19-year-old student who was protesting on the Kowloon Peninsula on Sunday, said the ban had given the movement another rallying cry. She noted that many protesters felt that their cause had lost some potency in September after Mrs. Lam promised to withdraw the unpopular extradition bill that first inspired the pro-democracy protests this summer.

“I see more people here today, angry and ready to do more damage,” Ms. Mok said. “I don’t understand why the government would provoke when they want the protests to end.”

The marches began peacefully on Sunday afternoon, as demonstrators in face masks chanted “Hong Kongers, resist!” outside the shuttered malls and stores of the Causeway Bay shopping district.

But the marches quickly morphed into pitched battles, as protesters blocked roads, threw bricks, set fires and vandalized subway stations or stores that they perceived to be pro-government.

“The heavens will exterminate the C.C.P.,” one protester wrote in graffiti, referring to the Chinese Communist Party.

By evening, with a drizzle of rain falling, the neighborhoods in the center of Hong Kong Island had taken on a post-apocalyptic pallor, with wide streets devoid of people and shops and restaurants shut down. A few people wandered the streets trying to hail taxis, in vain.

Elsewhere, there was violence between protesters and other civilians. Video footage circulating online showed a group that included masked men pulling a driver out of his taxi and beating him as he bled from the head.

Some protesters then formed a circle around the driver, in an apparent effort to protect him. Other footage seemed to show the same taxi, moments earlier, accelerating with a sharp swerve amid the crowds.

Separately, the police said in a statement that a driver had been pulled from his taxi “after a traffic accident,” and that he lost consciousness after being beaten. It was unclear as of late Sunday night whether the statement referred to the same driver in the video, or what his medical condition was.

The protests began four months ago in opposition to the now-abandoned bill that would have allowed the extradition of criminal suspects to the Chinese mainland. They have since evolved into a broader call to protect the high degree of autonomy that Beijing promised to grant the former British colony until at least 2047 under the city’s mini-constitution.

Street clashes between protesters and police officers have steadily grown more combative and dangerous. On Tuesday, a protester was shot by the police for the first time. Another was shot on Friday, though the police did not claim responsibility. Both were teenagers.

Hong Kong has been bracing for more unrest since Friday, when the government announced the ban on face masks, which many protesters use to protect their identity and guard against tear gas. In doing so, Mrs. Lam invoked a rarely used, colonial-era law that allows for new regulations when the territory faces “a state of serious danger.”

The ban draws on the so-called Emergency Regulations Ordinance, which offers Hong Kong’s leader extensive legal authority to bypass the local legislature. It was last used during deadly pro-Communist riots in 1967 against the British colonial government.

Mrs. Lam’s announcement immediately unleashed violent protests across the city on Friday. Hong Kong came to a virtual standstill on Saturday amid a shutdown of the entire subway system, although masked protesters openly flouted the mask ban at scattered gatherings.

“Maybe they’re trying a new model of dealing with the Hong Kong situation — of turning it into a de facto emergency state,” Gary Fong, a lecturer at Hong Kong Community College who studies policing strategies, said of the ban. It applies to public gatherings of more than a few dozen people and is punishable by a fine and up to a year in jail.

Enforcing the ban is likely to prove difficult, not least because face masks are so common at protests. Mr. Fong said that the punishment of up to one year — a tenth of what protesters already face whenever they join any of the many unauthorized marches — may not prove much of a deterrent.

The ban has already prompted stiff opposition from Mrs. Lam’s opponents in Hong Kong’s pro-democracy legislative minority. Two dozen of them took the government to court over the weekend, arguing that Mrs. Lam had overstepped her authority under the city’s mini-constitution, known as the Basic Law.

“Today is a battle between totalitarianism and the rule of law,” one of the lawmakers, Dennis Kwok, told reporters on Sunday morning. “So the government can implement any law they want — is that the way it is now? Or is Hong Kong still a society under the rule of law?”

After a day of eerie quiet on Saturday, parts of Hong Kong and its subway system had partially returned to life by Sunday morning. But the city still felt hushed all day, even as protesters with umbrellas and gas masks squared off against the riot police.

At a Methodist church in Wan Chai, where scores of protesters had retreated from advancing police lines, a line of pastors stood at the glass doors while medics treated those overcome by tear gas. As protesters left, pastors wished them well and reminded everyone to take their umbrellas.

Down the street at Our Lady of Mount Carmel Church — where Mrs. Lam, Hong Kong’s embattled leader, is a parishioner — more than a hundred young protesters in black shirts sat resting on the floor of a common area.

As a Mass took place in a room next door, some of the protesters removed their black shirts and masks, and changed into civilian clothing before heading outside.