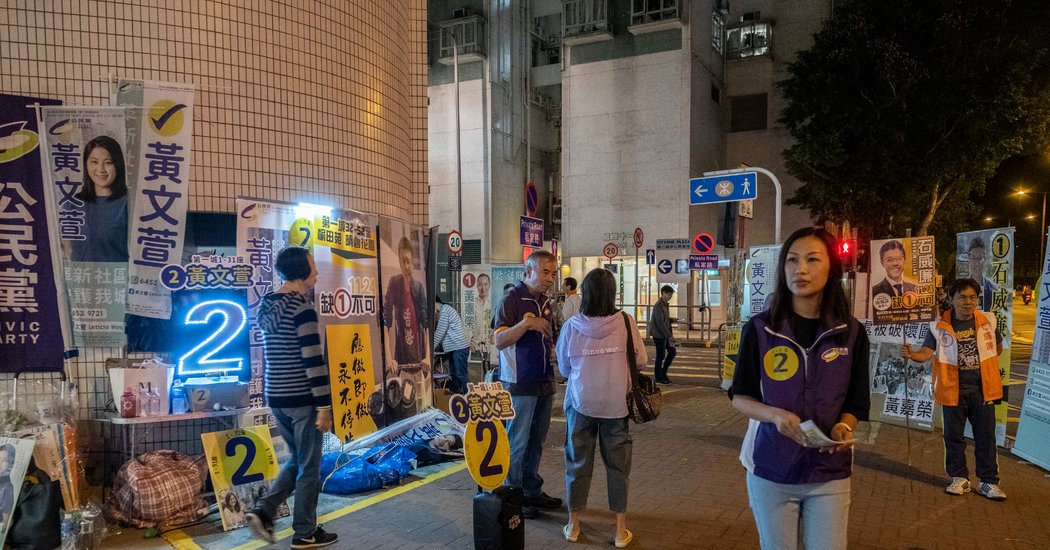 HONG KONG — After months of antigovernment protests in Hong Kong, voters on Sunday had a chance to voice their opinion on the city’s future — albeit through an election for a group of local officials who mainly deal with noise complaints, bus stop locations and neighborhood beautification projects.

The district council is one of the lowest rungs of Hong Kong’s elected offices. It is usually a quiet affair focused on community issues.

But in the midst of the increasingly violent protests that have divided the city, the race took on outsize significance and drew record-setting throngs of voters to polling places on Sunday.

The city was calm through the early afternoon, as democracy advocates appeared to focus on participating in one of the few elections that Beijing allows in the territory under its sovereignty.

The vote was the first test of whether the protests could transform public anger that has led millions to take to the streets into actual votes, or whether the populace had grown weary of acts of civil disobedience that have snarled transportation and forced the closing of schools and businesses.

“Politically speaking, the battle of the district councils as a whole is a crucial battle in taking control,” said Eddie Chu, a pro-democracy legislator who is also running for district council.

Here’s a look at the race and what is at stake:

A rumor helps produce a flood of early voters.

By midafternoon, with seven hours of polling to go, twice as many people had voted as had voted by the same hour in the previous district council election, four years earlier.

The voter turnout by that point, at 47.26 percent, had also surpassed the turnout percentage in the entire election four years ago, at 47 percent. The turnout in 2015 had already set a record, lifted by an awakening of political interest that accompanied the Umbrella Movement a year earlier.

Before voting began on Sunday morning, the government had strongly denied a persistent rumor on social media that the polls might close after the first several hours, instead of being open for the scheduled 15 hours.

But that rumor gave both sides in the election an incentive to urge their voters to show up early. Four times as many people voted in the first hour of polling as did in the 2015 district council elections.

“I haven’t been voting for a while — this time is very important,” Ada Chan, a 30-year-old office worker, said as she left a polling place after casting her ballot early.

Lines quickly became so long on Sunday morning that Patrick Nip, the territory’s secretary for constitutional and mainland affairs, appealed to the public to have more confidence that the polls would stay open.

“The voting time is very abundant, so you don’t have to concentrate on voting at the same time,” he said.

By late afternoon, lines had disappeared at some locations. The voters had dwindled to a trickle at the Yau Ma Tei Community Center polling station, nestled between the city’s famous street market for jade and the graceful banyan trees of an ancient temple.

A big election for a small office

A call to expand Hong Kong’s limited democracy is one of the demands of the protest movement, which began in June over a now-withdrawn proposal that would have allowed extraditions to mainland China. Protesters have called for direct elections for the entire legislature, where currently only 40 of the 70 seats are selected by popular vote. They have also called for the chief executive, who is selected by a largely pro-Beijing election committee, to instead be chosen by voters.

The district councils have no lawmaking power. They control small amounts of public funds for simple infrastructure, like rain shelters. They lodge concerns with government departments over noise, traffic, sanitation and other issues. (Of the 479 district council seats, 452 are directly elected.)

The district council members do have a modest role in choosing the chief executive, Hong Kong’s highest official. Whichever side wins a majority of the seats controls 117 votes in the 1,200-member chief executive election committee.

That election committee is dominated by pro-establishment corporate interests, and the chief executives they have selected have always been loyal to Beijing. But a win would give the overall pro-democracy camp control of an additional 10 percent of the votes, and put it close to the 150 votes necessary to nominate a candidate.

This year, several pro-democracy candidates have included protest slogans on their materials. Law Cheuk-yung, 22, said he was inspired to run for district council because of recent social movements. He said he would demand answers from the police after residents complained of possible testing of tear gas in his district, Tuen Mun.

“I want to imagine local government being more responsive,” he said. “At the moment the district council is just a rubber stamp. They do whatever the government wants.”

For such candidates, it is more about playing to the sentiment of the protests rather than taking action. They would not have much of a role in addressing protesters’ demands, which include an investigation into the police’s use of force, offering amnesty to those arrested in the protests and expanding direct elections.

“They are all trying to capitalize on public anger,” said Suzanne Pepper, a scholar of Chinese politics who lives in Hong Kong.

Establishment parties have long had an advantage in these races, in part because they are much better funded, with backing from businesses. Currently the pro-Beijing camp holds 327 district council seats versus 124 for the pro-democracy group.

Rising interest in the election has meant that pro-democracy candidates are participating in every race, unlike previous years, when some establishment district council members ran unopposed. And after worries about disqualifications, only one of the camp’s candidates, the prominent activist Joshua Wong, was barred from running this year for political reasons. An election officer ruled that Mr. Wong could not uphold Hong Kong law because his political organization viewed independence from China as a possible goal for the city.

A campaign plagued by violence

A string of violent attacks on election candidates has hung over the race. Twelve opposition figures, including prominent politicians and activists as well as first-time candidates, have been ambushed and bloodied by gangs of masked men or attacked while canvassing for votes.

“We can see Hong Kong isn’t as free and as civilized as we’d previously imagined,” said Jannelle Leung, a 25-year-old accountant who was struck in the back of her head with a hard object in early October the day she announced she was officially running. She also said she received sexually harassing phone calls before the attack.

Jocelyn Chau, a first-time candidate like Ms. Leung who received similar lurid calls before being punched by a man while canvassing last month in the pro-Beijing neighborhood of North Point, criticized the government for not condemning the attacks on pro-democracy figures. “Not even superficial gestures,” said Ms. Chau, 23.

The polarizing pro-Beijing lawmaker Junius Ho was injured in a knife attack this month and his offices were vandalized. He called the attack “a dark day for the district council election,” adding that the “orderly election had been completely obliterated.”

A large number of police are deployed

The attacks on candidates and vandalism had stirred worries that the election might be postponed. Some pro-democracy figures had said that a delay could harm their strength at the polls.

Carrie Lam, Hong Kong’s chief executive, said the government would do its best to ensure the election would go on as scheduled. The government posted riot police officers near polling places across the city, though outside the zones marked with yellow tape where only voters could go.

The city had been convulsed by two weeks of intense protest, including on several campuses. At Chinese University of Hong Kong, protesters clashed with the police and occupied the college for five days. At Hong Kong Polytechnic University, more than 1,000 people at one point were trapped by a policesiege.

Patrick Nip, the secretary for constitutional and mainland affairs, warned Monday that further unrest would reduce the chances of the election’s being held as scheduled. He called for an end to violence “and all kinds of duress.”

In the past few days, protests have ebbed drastically, however, as the city prepared to take its conflicts to the polls.