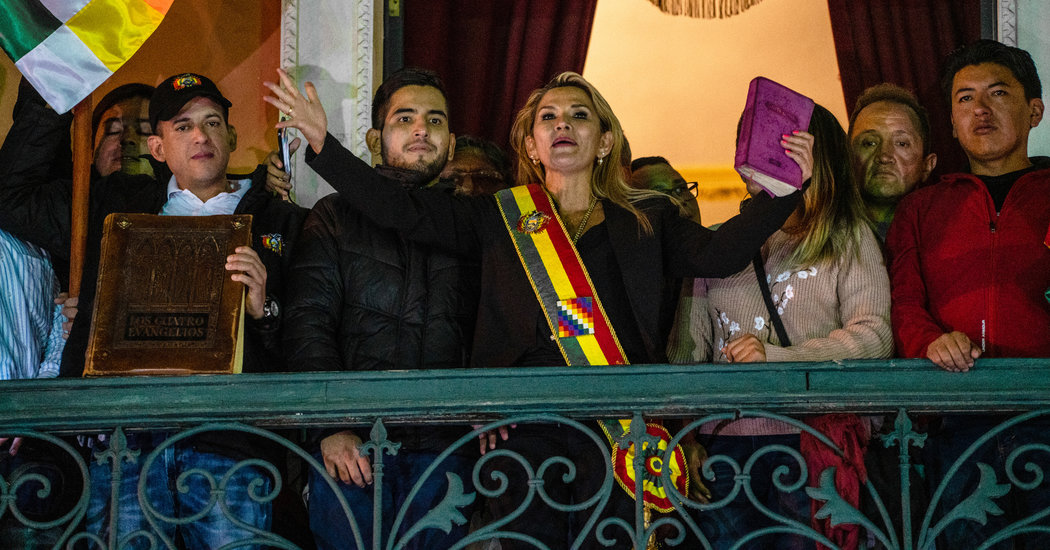 LA PAZ, Bolivia — Bolivia’s political crisis took a dramatic turn on Tuesday when a leading lawmaker stepped forward and claimed the presidency, even as the country’s ousted leader urged his supporters in the legislature to battle on from his exile in Mexico.

“I assume the presidency immediately and will do everything necessary to pacify the country,” the lawmaker, Senator Jeanine Añez Chavez, told members of the assembly.

But with supporters of the ousted President Evo Morales refusing to take part in the legislative session, it was not immediately clear whether Ms. Añez’s declaration would move the country away from conflict, or headlong into it.

Minutes after she spoke, Bolivia’s highest constitutional court issued a ruling that backed her assumption of power. She was the highest-ranking politician in the line of succession after Mr. Morales and other top officials stepped down.

The country had been without a leader since the resignation on Sunday of Mr. Morales, Bolivia’s first Indigenous president, who came to power more than a decade ago as part of a leftist wave that swept Latin America.

It seemed uncertain that Ms. Añez would be able to calm the tense and deeply polarized nation. Shortly after her announcement, members of Mr. Morales’s party said they would hold another legislative session on Wednesday to nullify her decision.

Mr. Morales denounced Ms. Añez’s move as illegitimate. saying on Twitter that she had acted “without legislative quorum, surrounded by a group of accomplices and supported by the armed forces and the police, which repress the people.”

A former media executive and leader of a conservative coalition, Ms. Añez said before she declared herself president that she would lead a transition focused on selecting an honest electoral commission and holding elections as soon as possible.

“This is simply a transitory moment,” she said earlier Tuesday. “There is an urgency.”

Fireworks echoed across La Paz, Bolivia’s largest city, and in other major urban centers. But at the same time, the police used tear gas to disperse furious crowds of Mr. Morales’s supporters who were gathered in downtown La Paz.

Mr. Morales’s abrupt departure had come after the armed forces sided with protesters who accused him of rigging an election to stay in power. Mr. Morales, who was granted refuge by Mexico “for humanitarian reasons,” has described his ouster as a coup.

Some political and legal analysts said the steps taken by Ms. Añez and the assembly members present for her announcement were extraordinary but necessary, because members of Mr. Morales’s party had boycotted the scheduled session at which they were to select a new president.

“Añez, along with congressmen of both chambers, are abiding by their constitutional duties and are taking measures to secure the constitutional succession of power,” said Carlos Aramayo Raña, a Bolivian political scientist.

“Politically speaking, what is the alternative, Bolivians fighting each other?” Mr. Aramayo Raña asked. “Who will take responsibility for the blood that will be spilled?”

Earlier on Tuesday, in a rapid-fire series of tweets, Mr. Morales had urged members of his coalition to continue blocking efforts to nominate an interim leader.

He congratulated the legislators for not showing up at the session at which his resignation would have been formally accepted, and Ms. Añez recognized as the country’s interim leader. He said they were “acting with unity and dignity to reject any manipulation by the racist, coup-mongering and traitorous right wing.”

This frustrated many of the legislators who wanted to move forward.

“Today, they have to understand that the most important is Bolivia, not Evo Morales,” one opposition lawmaker, Luis Felipe Dorado, said of the president’s supporters. “Evo Morales is gone from the country, but they continue to obey him, not the will of the country.”

On Monday, as looting and violence spread across several cities, Ms. Añez at first appeared rattled, sobbing as she called for calm. But by the evening, she was projecting strength, and demanding that the army accept the national police’s call to jointly patrol the streets of La Paz to restore order.

The army quickly responded, sending troops into the streets and setting up defensive positions around vital infrastructure like electricity and waterworks.

The military high command met with Ms. Añez for more than an hour at the government palace Tuesday night in what her aides described as a planning session to keep the peace. At the end of the meeting, pictures were released of the senior officers saluting Ms. Añez.

Bolivians appear sharply divided in their views — and in their hopes for the future.

When Mr. Morales was first elected in 2006, he became the first Indigenous person to lead Bolivia, a nation in which two-thirds of the population are Indigenous. In the Plaza San Francisco in La Paz, street vendors, most of them Indigenous, overwhelmingly expressed support for him.

“Evo was the best president we ever had,” said Rosario Siñane, 39, who was selling individually wrapped candies. “Now we have no more hope.”

José Ariel Blanco, the 25-year-old owner of a stationery store two blocks from the legislature, said he was thankful for Mr. Morales’s achievements — chief among them, tackling the racism that the Indigenous had suffered for centuries.

“My grandmother couldn’t walk into a bank in her Indigenous clothes until Evo became president,” he said. “Now she can, and that won’t change.”

But he said Mr. Morales went too far in bending the rules of democracy. “The Venezuelan and Cuban models don’t work over time,” he said.

Down the street from Mr. Blanco’s store, Victor Huancollo, a 24-year-old computer science university student, stood guard at a makeshift barricade intended to keep supporters of Mr. Morales from approaching the legislature. He was hopeful that new elections would be held in a few months, he said, and that “a transparent president who is not corrupt will emerge, not like what we had over the last 14 years.”

In comments to the news media, Mr. Morales remained defiant, vowing to continue his involvement in politics and his fight for social justice, Bolivia’s Indigenous populations and the poor.

“We are very grateful to the president of Mexico, because he saved my life,” he said.

Mr. Morales left office after weeks of growing unrest over a disputed presidential election and after the military indicated it would support the people in the streets who were calling for him to step down.

In his audio message, which was released by the Mexican news media and broadcast in Bolivia, Mr. Morales called on the military to “stop the massacre.” Photographed draped in a Mexican flag aboard a Mexican Air Force plane, Mr. Morales also told his supporters, “We’ll work together for Bolivia.”

At a news conference on Tuesday morning, Mr. Ebrard, the Mexican foreign minister, said his government had encountered numerous difficulties in securing permission to land its plane in Bolivia to retrieve Mr. Morales, and in getting cooperation from other countries in the region to facilitate the plane’s return to Mexico with the former Bolivian president aboard.

Among the obstacles, he said, the government of Peru had forbidden the plane to land on Peruvian territory to refuel during its return trip, and Ecuador had blocked passage over its territory, forcing the plane to take a path over the Pacific Ocean.