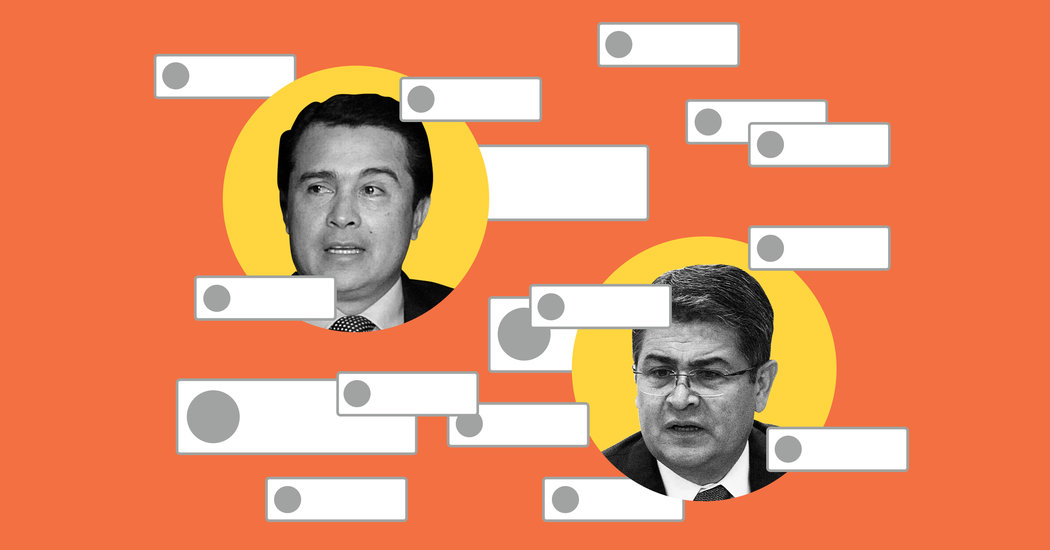 Times Insider explains who we are and what we do, and delivers behind-the-scenes insights into how our journalism comes together.

I didn’t think much of it when the first lady of Honduras tagged me in a tweet about her husband. Or when, a few days later, she tagged me in another one. And then on Friday, President Juan Orlando Hernández tagged me, too — about 12 hours before his brother was found guilty of trafficking massive amounts of cocaine into the United States.

For much of Honduras, the trial of Tony Hernández, the president’s brother and a former congressman, played out like a narco-novela come to life. Except that instead of daily installments on television, the drama unfolded largely on Twitter.

Tony Hernández was arrested in Miami last November and charged with four counts related to drug trafficking. In August, the United States government identified President Hernández (frequently referred to by his initials, J.O.H.) as a co-conspirator in the case. The man who had helped pass a law enabling the extradition of drug traffickers to the United States was tangled up in drug money, prosecutors said.

Many Hondurans took to Twitter, where they could hear from reporters who had been inside the courtroom in Manhattan.

On Day 1, El Chapo made a guest appearance, as prosecutors claimed that in 2013 the Mexican drug lord, Joaquín Guzmán Loera, then the most wanted man in the world, had flown to Honduras and hand-delivered Tony Hernández $1 million for the current president’s election campaign.

Mr. Guzmán made headlines from his cell at a supermax prison in Florence, Colo., where he was taken shortly after receiving a life sentence from a Brooklyn judge this July. He played second fiddle only to another absent character: President Hernández. The president, whose name was mentioned frequently by the five cooperating witnesses in the case, has not been indicted and has denied any wrongdoing.

A few days after prosecutors introduced the jury to Chapo, Amílcar Alexander Ardón Soriana — a former small-town mayor who admitted to killing 56 people — entered the courtroom to bring the narrative full circle. Detailing a $1 million deal made around his dining room table, Mr. Ardón said that the president had later acknowledged receiving Chapo’s bribe.

When I reported these developments, many Hondurans tweeted back at me. So did the Casa Presidencial — the Honduran equivalent of the White House — who responded in Spanish: “How can one trust in a narcotrafficker and confessed killer? That is something that never happened. That is a total lie.”

Throughout the trial, everyday Hondurans engaged directly with what was said in the courtroom, largely expressing distrust in their president (who continued to deny the accusations).

Such a movement might seem unremarkable, except that the country of more than 9 million people rarely uses the site. Twitter declined to provide specific data regarding its use in Honduras, but according to StatCounter, a web analytics service, Twitter use among Hondurans increased from 2.26 percent in September to 6.39 percent in October so far. Additionally, many Hondurans shared tweets via WhatsApp, which is commonly used throughout Central and South America.

Most Honduran news outlets are distrusted in the country. For all the drama that passed through the courtroom, comparatively few Honduran media outlets came to New York to cover it. (One notable exception was UNE TV, which runs independently from the government.)

After all, one of the main television channels, TNH, is run by the government — common in Latin American countries — and most other media outlets, like TN5, Canal 10 and Q’Hubo TV, are known as “medios tarifados,” which exchange taxes for government publicity which is “established exclusively with the president of the Republic” or another delegate.

The law enabling such a deal passed under President Hernández, then the head of the National Congress, and within months of Chapo’s visits to Honduras. Some other outlets are widely believed to be supported by cartels, while another now-defunct newspaper, Diario Tiempo, was owned by the Rosenthal family, mentioned in court in conjunction with the same conspiracy, until 2015 when members of the family were indicted on money laundering charges. Another newspaper now uses that name.

After Friday’s verdict, the newspaper La Prensa, whose owner also supplies pharmaceuticals through the government, published a soft-hitting profile of Tony Hernández, complete with pictures of its subject skiing and riding a horse. Its headline read: “Tony Hernández, a lover of sports and dressing well.”

Someone else appeared uninterested in the news coming from the courtroom. Even as federal prosecutors called President Hernández’s CZ Scorpion, a machine gun engraved with his name, “an embodiment of what state-sponsored drug trafficking looks like,” President Trump went on Twitter to praise the accused co-conspirator with helping curb emigration.

President Hernández retweeted Mr. Trump’s accolades, then referenced the machine gun with his name on it — and me. “How ridiculous,” he wrote, tagging me and others in a collage of guns engraved with the names of American presidents. President Hernández would tag publications and reporters in tweets throughout the trial — using it as a main platform to respond to the accusations coming from court, which he likened to the narrative of “Alice in Wonderland.”

At 12:08 p.m. Friday, the jury returned a verdict of his brother’s guilt on every charge. In the hours after, Hondurans again took to Twitter — this time to thank reporters in the courtroom. One user called the team of reporters there an example of people doing a job “sin fronteras” — without borders.