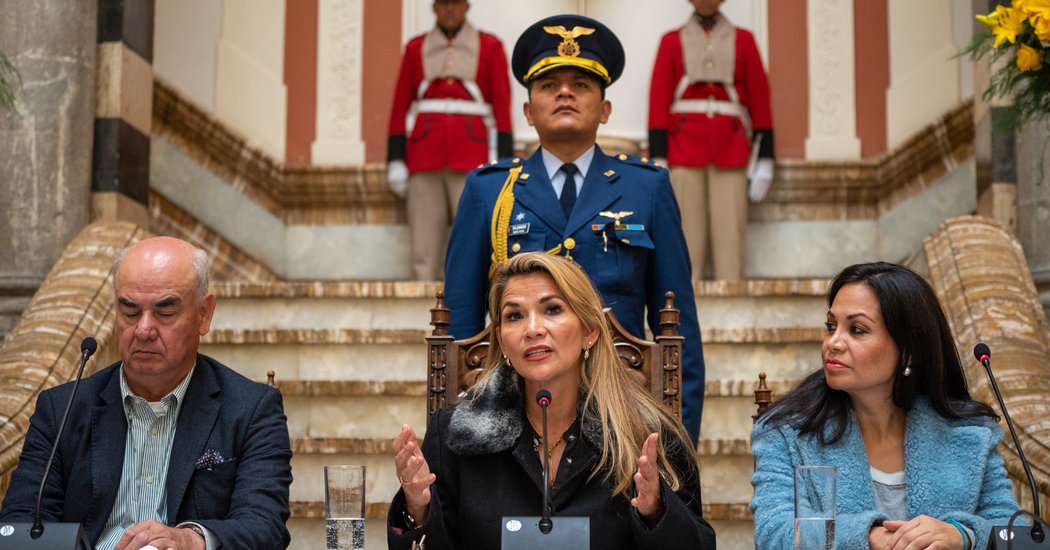 LA PAZ, Bolivia — The interim leader of Bolivia took power this week promising to unify a nation in turmoil. But she has since stacked her cabinet with conservative ministers and thrust religion to the forefront of government at the risk of deepening the divides.

The leader, Jeanine Añez, also called on security forces to restore public order and police responded by opening fire Friday on coca farmers protesting against the government in the central city of Cochabamba. The clash left nine protesters dead and dozens injured, the worst violence yet in the country’s monthlong political crisis.

Ms. Añez already appeared to be reaching beyond her caretaker mandate of organizing national elections by January — taking steps, for example, to reshape the country’s foreign policy. Her actions threaten to complicate negotiations with allies of former President Evo Morales to reach a democratic solution to the crisis.

“Without a popular mandate, they are pushing forward some of the most objectionable aspects of their agenda,” Javier Corrales, a Latin American politics professor at Amherst College in Massachusetts, said of the country’s new leaders. “They seem to be thinking that what Bolivia needs right now is a purge, and not conciliation.”

Ms. Añez, a little-known senator from a remote Bolivian region, was sworn in on Tuesday after Mr. Morales, the country’s first Indigenous president, was forced into exile by protests and pressure from the security forces.

One of Bolivia’s most transformative leaders, Mr. Morales’s grip on power unraveled after he tried bending electoral rules to stay in power for a fourth term in October, flouting constitutional term limits he himself had set.

Just before she assumed power, Ms. Añez told reporters that her only aim was to unite the country and restore it to the path to democracy. But her critics say her actions so far are having the opposite effect.

She injected Catholicism into government, swearing in her ministers in front of a large Bible and making speeches shadowed by an aide carrying a cross. Her heavy use of Catholic imagery was in sharp contrast to the Indigenous ceremonies held by Mr. Morales in the presidential palace.

In a country where the vast majority of citizens consider themselves Christian, said Mr. Corrales, the analyst, Ms. Anez has turned to Bolivia’s conservative religious groups for support to mask her lack of a popular mandate.

Ms. Anez’s close ally, Luis Fernando Camacho, on Wednesday held a political rally at which another speaker shouted disparaging references to the Indigenous culture that Mr. Morales championed: “We have tied all the demons of the witchery and thrust them into the abyss. Satans, get out of Bolivia now.”

Ms. Anez’s revival of Catholic rituals in public events has caused more than a little discomfort because the Constitution defines Bolivia as a secular state. Her religious zeal has also caused concern among some Indigenous groups who associate Catholicism in politics with the former conservative governments that had long treated them as second-class citizens.

In a further shift from Mr. Morales’s focus on Indigenous rights, Ms. Añez has filled her cabinet with politicians from the country’s eastern lowlands, which are dominated by Bolivians of mixed or European descent. Many of her ministers have been staunch opponents of Mr. Morales’s socialist policies or have served in previous conservative administrations.

The most radical changes have come from the Foreign Ministry. In just a few days, Ms. Añez, has cut Mr. Morales’s alliances with leftist governments in the region. She broke off relations with President Nicolas Maduro of Venezuela and kicked out hundreds of Cuban doctors working in the country.

The new Bolivian government has accused Venezuela and Cuba of destabilizing the country and financing subversive groups, an allegation regularly used by the region’s right-leaning governments when faced with internal discontent. On Friday, Bolivian police detained nine Venezuelan citizens, whom they claimed were undercover security agents.

On Thursday, Ms. Añez issued a presidential decree exempting the military from criminal prosecution when maintaining public order. The following day, police cracked down with lethal force on the protesters in Cochabamba.

“We’re going to go hunting for Juan Ramón Quintana,” said Mr. Murillo, “because he is an animal that feeds on the blood of the people.”

Mr. Morales’s political party is demanding protection from persecution in return for its agreement to participate in new elections. The party, Movement for Socialism, remains the most popular in the country, making its participation crucial to the legitimacy of any new vote.

Some Bolivians fear that rather than expanding democratic rights, Ms. Añez could weaken them.

The new communication minister, Roxana Lizárraga, is a radical commentator who often railed against Mr. Morales’s government. On Thursday, she threatened to persecute journalists who are “involved in sedition,” adding that she already has a list of troublesome members of the media.

“These actions don’t correspond to the transitional government — they require support of the voters,” said Fernando Molina, an author and journalist based in La Paz. “What they are doing is capturing political trophies. They want a clean break from Evo.”