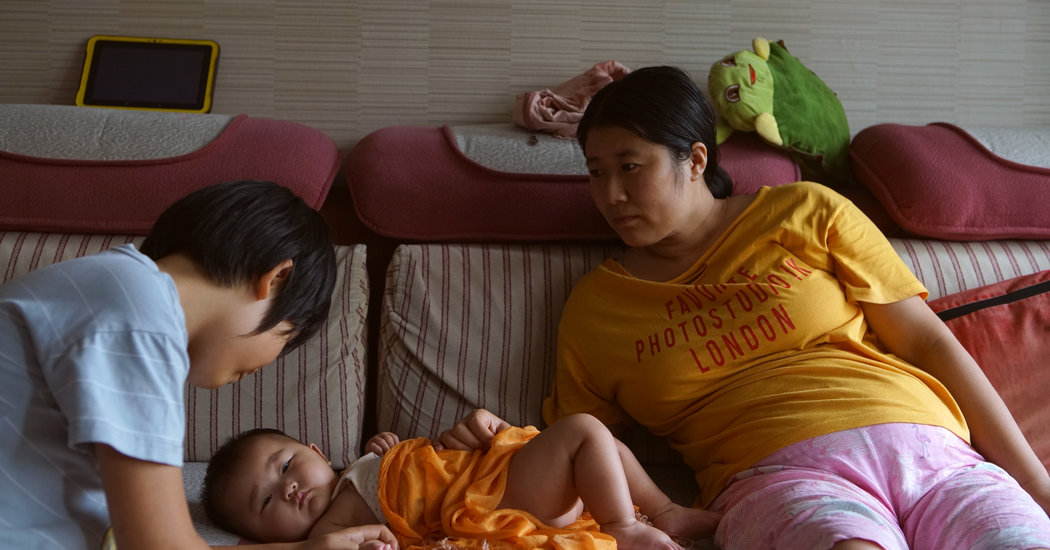 The women’s accusations briefly lit up the Chinese internet. Three employees of a big Chinese logistics company said their bosses had fired them or cut their pay after they became pregnant.

In one case, the company, China Railway Logistics, did not send a representative to an arbitration proceeding. The company then went to court to challenge the award the woman received. But it backed off as media attention intensified and because the stakes were so small: The award was less than $5,000.

“It isn’t worth it to waste time on this little money,” the company’s lawyer told a local reporter for a state-controlled newspaper.

China’s leaders are encouraging women to have it all: a career and more babies. In reality, Chinese women are filing lawsuits and pursuing arbitration against employers who they claim are ignoring laws meant to keep mothers in the workplace.

[The topics new parents are talking about. Evidence-based guidance. Personal stories that matter. Sign up now to get NYT Parenting in your inbox every week.]

China has laws against gender and pregnancy discrimination and a maternity policy that ensures 98 days of paid leave, but enforcement is scant. Women who seek a legal remedy for mistreatment often win a pittance in compensation. They worry that a fight — any fight — will ruin their chances to find other work. And they fear retribution if they speak publicly.

In the case of China Railway Logistics, a company based in Beijing that operates 5,000 warehouses, the three women said they had were either expecting or nursing when they lost their jobs. They turned their cases into a rare coordinated action and were identified in court papers by their first initials and last names. None of them want to talk about it now.

But other women, like Li Xiaoping, want to speak up. She was fired by an electronics company, she said, after disclosing that she was pregnant. “Should a woman just go back to fulfilling her traditional role as a wife and be shut out of society after giving birth?” she said.

Ms. Li, 33, said that her former employer, Qingdao Keyrin Electronics, billed her $18,430, the equivalent of 52 months of pay for what it said was “great economic loss.” She said that the company had locked her out.

Ms. Li prevailed in arbitration but lost when the company appealed in court. She is fighting that and another legal dispute: the company has sued Ms. Li, her husband, a Chinese reporter and a newspaper that wrote about her case for defamation, seeking $1 million in damages.

Li Wei, the chief executive of Keyrin, disputed Ms. Li’s story, saying that it was “completely inconsistent with the facts” and that she did not show up for work. “In the last three years, 11 female employees have had babies,” Mr. Li said. “This is the best evidence that we treat our female employees well.”

It might look like the time has never been better for working mothers in China. Faced with an aging population, officials have abolished the country’s one-child policy. Some local authorities have extended maternity leaves or considered tax breaks to encourage women to have a second child.

But experts see a paradox in China’s approach. The country, the world’s second-largest economy after the United States, needs more children because of its shrinking population and says it wants women to work, but it offers few incentives for working mothers. Female participation in the labor force has fallen since the 1990s, and the pay gap between women and men has widened.

China, like the United States, does not subsidize maternity leave. Companies tend to equate leave with lost revenue: They get nothing when mothers take time off. Legal complaints filed by mothers show that local authorities did not investigate reports of bias or firings, although the country itself seems to be rethinking some workplace standards.

This year, the Supreme People’s Court created a legal category called employment equality that allowed women to report gender bias. A small number of pregnant women are using that to make claims.

The discrimination often begins with the job application.

It is illegal in China for employers to ask a woman about her marital status or family plans, but many companies still do. Some even force new employees to sign agreements not to get pregnant. Some women, like Liu Yang, are reconsidering the fairness of earlier demotions.

Ms. Liu, 42, worked for eight years selling sanitary napkins and maternity products for Beishute, a company in Jinan. She was a deputy manager when she had her first child, in 2014, and she was demoted when she returned, she said. Her monthly pay was cut from $1,120 to $980.

Ms. Liu did not view it as discrimination at the time.

“I just internalized it,” she said. “I realize now that the company treated me unfairly, but I didn’t know much about the law.”

She said that other pregnant women were demoted, and that one was fired. When she got pregnant again, Beishute cut her pay to $630, she said. She did not receive maternity pay. She was fired within a week of returning, with the company citing unsatisfactory work.

“I felt helpless and mistreated,” Ms. Liu said. She and her husband support two children and two grandparents.

She pursued arbitration, seeking $105,000 in unpaid wages, lost overtime and damages. She was awarded $25,000. She is appealing in court. Her husband, Wang Guanghui, is as determined as Ms. Liu to make the company do what they think is right.

“Society has laws and rules, and they cannot bully us like that,” Mr. Wang said.

Beishute would not respond to questions about the case. Emails to the company went unanswered. A representative of the legal department said in a brief phone interview that the company had not fired Ms. Liu. He declined to elaborate and gave only a last name, Peng.

In the 2017 case involving China Railway Logistics, a customer service manager said that her pay had been cut after she had a baby. Identified as Y.W. Wu in court filings, she sought $5,600 in compensation. She won by default after no one from the company attended arbitration. China Railway Logistics appealed in court, citing financial losses and restructuring as the reason her pay had been cut. The company, which employs 50,000 people, did not respond to requests for comment.

The three women won about $17,000 in total compensation. Huang Sha, their lawyer, said that such small payouts gave companies little incentive to obey the law.

“Women’s rights should not just be propaganda,” he said. “The government wants to protect the company, but it also wants to encourage women to have more kids. There is a contradiction here.”

Fan Huiling, a school security guard, was excited when she discovered, at 41, that she was pregnant for a second time. But when she asked her employer, Zhuhai Yingli Property Management, for a few days off based on a doctor’s recommendation, she was told not to return. Her belongings were left in a pile outside the school.

She panicked. “Without this job,” she said, “I don’t have any life security.”

Ms. Fan sought advice online and visited one government office after another looking for help. She eventually filed for arbitration. The next day her doctor told her she had had a miscarriage. She sued, citing the new employment equality law category.

In a brief phone interview, a Zhuhai Yingli manager disputed Ms. Fan’s accusations, saying that the company had other pregnant employees. “We don’t want to comment on this anymore,” the manager said, declining to give her full name.

In October, a court ruled in Ms. Fan’s favor, requiring the company to pay her $2,000 — the equivalent of four months’ pay — and issue a formal apology.

For all of the women seeking help for pregnancy bias, there are some who stay silent at work. They share their stories on the internet, and keep looking for employers who follow the law.

When Li Ronghua returned to Suning Consumer Finance, an arm of the online retailer, after giving birth, she said she was criticized after leaving her desk to pump milk twice a day. In a meeting, executives cited her as an example of a bad employee for leaving without permission. The head of human resources later told her that she should quit, Ms. Li said. The company did not respond to emails and phone calls.

Ms. Li, 36, has since found a job at a small financial leasing company. But in job interviews, she said, she was routinely asked if she planned to have a second child.

“The weak cannot win against the strong,” she said. “I just accept it, gradually.”