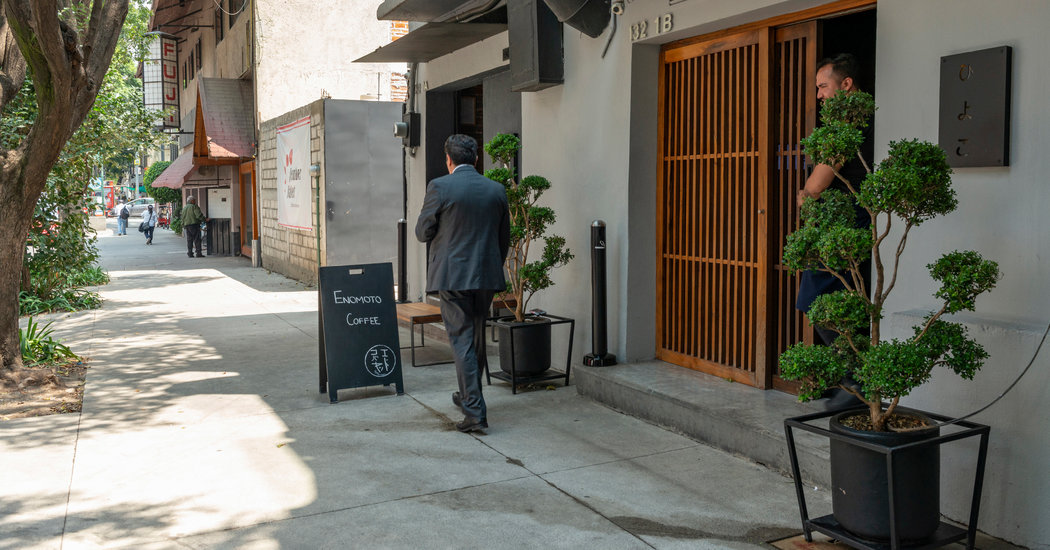 On a summer afternoon in Mexico City’s leafy Roma Norte neighborhood, a steady stream of customers filled the tiny coffee shop Raku, which means “joy” in Japanese. While they were drawn by the coffee, I was in the new spot to learn how the owner Mauricio Zubirats makes a cup of matcha tea.

The fine green powder from Kyoto was measured, mixed with hot water and — using a brush made from a single piece of bamboo — whisked exactly 30 times. The moss-colored result was earthy and bitter, and for a second, I was transported from this cafe tucked between two parking garages to Japan.

Despite being oceans apart, Mexico and Japan have long been connected, ever since 1614, when samurai Hasekura Tsunenaga arrived in Acapulco as the first Japanese ambassador of New Spain. In Mexico City, a modern-day reminder of the relationship appears every spring, when the jacaranda trees — the first of which were planted in the 1920s at the suggestion of Tatsugoro Matsumoto, a Japanese immigrant and imperial gardener from Tokyo — burst with purple, cloudlike blooms.

Though sushi restaurants are long established in Mexico’s cosmopolitan capital, other Japanese-inspired businesses have been sprouting up in the last few years — from fashion labels and boutiques to a new hotel — along with new Japanese-influenced places to eat and drink. (Even the acclaimed chef Enrique Olvera introduced a Japanese culinary tradition at Pujol; instead of sushi, the multicourse omakase menu features Mexico’s quintessential dish: tacos.)

According to Max St. Romain, who runs the popular Instagram food account Gastronauta DF, the dichotomy between the two destinations has helped stoke this adoration for all things Japanese — gastronomy and beyond.

“A lot of us Mexicans admire Japanese culture because it’s the polar opposite of what we are,” he said. “It has this elegance, subtlety and minimalism, and in Mexico we’re all about the loud and the big and the explosive.”

You only have to visit what’s called Little Tokyo, in the northern part of the capital, to see for yourself. The pocket-size area is hotter than ever, mostly thanks to the Tijuana-born restaurateur Edo Lopez, whose paternal great-grandfather was born in Japan.

In 2013, Mr. Lopez opened the sushi spot Rokai, and now his Edo Kobayashi Group runs a mini-empire of restaurants within blocks of each other (including ones dedicated to ramen and yakitori). In December 2018, he added the fine-dining Emilia — which offers Japanese-inflected dishes using local ingredients — and the hi-fi cocktail lounge Tokyo Music Bar.

More recent projects from Mr. Lopez include Tatsugoro, a sushi counter and whisky bar named for the aforementioned imperial gardener that just opened inside the St. Regis Hotel, and a fried chicken spot called EFC, which stands for Edo’s Fried Chicken and serves side dishes that incorporate Japanese ingredients like wasabi and the citrusy-spicy yuzu kosho.

There’s even a Japanese-style inn, or ryokan, in Little Tokyo. Aptly named Ryo Kan, the peaceful, 10-room property opened in April 2018 and is constructed out of wood and stone. Guests can relax in rooftop hot tubs, a nod to onsen (Japanese hot springs), and choose to sleep on futon-topped tatami mats instead of standard beds.

Just south, not far from Raku, a triangle-shaped slice of Roma Norte is well on its way to becoming Little Tokyo 2.0. There’s an outpost of Tokyobike, a Japanese brand known for its simple, lightweight urban bicycles. And a husband-and-wife duo (he’s Japanese, she’s Mexican) own Kameyama Shachuu, Mexico’s only retailer of hand-forged Sakai Takayuki knives made outside of Osaka.

Less than a mile away, the brick-walled bakery Tsubomi sells addictive savory and sweet snacks like anpan, a roll filled with red bean paste. A few blocks from there, Hashi Gallery held its inaugural exhibit in February 2018. The brainchild of Omar Rosales, the gallery promotes established Japanese artists through pop-up shows around the city; the next one is October 27. “Hashi means ‘bridge,’ and the idea is to bridge the art worlds of Japan and Mexico,” said Mr. Rosales, who earned a Ph.D. in Japanese art and philosophy at Hiroshima City University.

Nakanoke & Sons salsa — which combine spice with sour, sweet, salty and umami flavors, and is sold in local specialty food shops — also came to fruition nearby. The salsas originated in 2014 at the studio of the chef Eduardo Nakatani, who teaches ramen cooking classes at the culinary space Sobremesa. Mr. Nakatani’s Japan-born grandfather and Mexican grandmother invented the famed cacahuates japoneses — peanuts covered in a thin layer of dough and then fried — in the 1940s, and Mr. Nakatani grew up eating dishes that melded the two cultures. His salsas do the same, blending Asian ingredients like dried shrimp, soy sauce and miso paste with different chiles to create a complex condiment that does more than just add heat.

The fashion designer Guillermo Vargas was motivated by his Japanese heritage when founding 1/8 Takamura, so named because his paternal great-grandfather was Japanese. His clean-lined men and women’s clothing is handmade with geometric angles, reflecting what Mr. Vargas describes as the powerful simplicity of the Japanese aesthetic. Yet he also points to the similarities between the two cultures.

“We both have ancient civilizations and are very religious people,” he said. “So even with the differences, it’s easy for us to appreciate their philosophies.”

The owner of the Raku coffee shop, Mr. Zubirats, said he is guided by many Japanese principles. He has described how the café’s cracked concrete walls and tree-trunk stools exemplify wabi sabi, an aesthetic idea that finds beauty in the imperfect, and how he embraces the hospitality concept of omotenashi, “when the host puts all his attention into the slightest details so the guest can have the best experience possible,” he said.

For Mr. Zubirats, serving coffee roasted in-house is merely a means to an end; he is happiest whisking matcha — and providing a quiet, if temporary, respite from the vibrant, loud, bustling city just outside his doors.

52 PLACES AND MUCH, MUCH MORE Follow our 52 Places traveler, Sebastian Modak, on Instagram as he travels the world, and discover more Travel coverage by following us on Twitter and Facebook. And sign up for our Travel Dispatch newsletter: Each week you’ll receive tips on traveling smarter, stories on hot destinations and access to photos from all over the world.