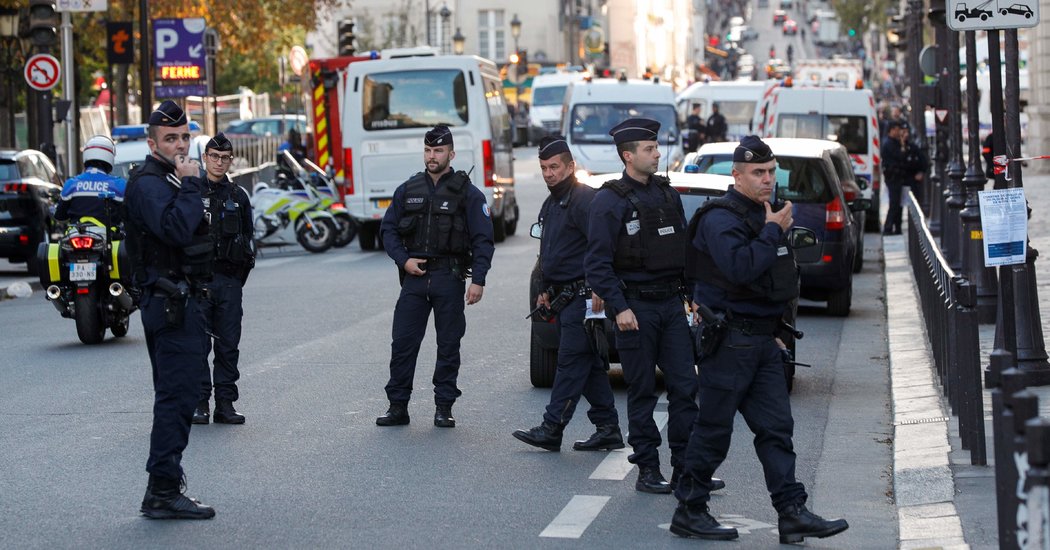 PARIS — Evidence that the Paris police department missed warning signs about an employee who slashed four colleagues to death at its headquarters on Thursday is prompting demands for a leadership shake-up.

At a news conference on Saturday, France’s antiterrorism prosecutor, Jean-François Ricard, said the killer, a 45-year-old computer technician who worked in police intelligence, had tried to justify to a colleague the killings in January 2015 at the magazine Charlie Hebdo and had done the same for other radical Islamist killings.

The disturbing statements he made after a dozen people were killed in the Charlie Hebdo attack in Paris were reported to higher-ranking officers, a police union official said Saturday, but nothing was done.

The fact that this and other potential clues — including a video the killer posted on Facebook that imitated throat-cutting — were missed by the police administration that surrounded him, at the heart of an organization dedicated to fighting terrorism, has shocked the ranks of the national police.

It has also set off calls for the interior minister’s resignation.

The killer, shot to death during the rampage, was identified by the prosecutor only as Mickaël H., but the French news media said he was Mickaël Harpon, born in the French West Indies department of Martinique.

He was a longtime convert to Islam, not a recent one as officials had said in the aftermath of the killings, and was an assiduous attendee of his local mosque, going to morning and evening prayers. A radical imam who was nearly expelled from France officiated there, a police union official said Friday.

The killer also had contacts with “several individuals suspected of being part of the Salafist movement,” Mr. Ricard said, referring to an ultraconservative movement within Sunni Islam.

The prosecutor also pointed to dozens of religious-themed text messages the killer exchanged with his wife shortly before the killings, suggesting these showed he adhered to a “radical vision of Islam.”

In addition, the killer had stopped having “certain kinds of contacts with women,” the prosecutor said, without specifying.

“There are a lot of questions, and there is a lot of anger,” said Yves Lefebvre, a union official. “The police are asking, ‘How on earth could this have happened?’”

“What could easily have happened from the outside is now coming from the inside,” he said, blaming in part the extended Yellow Vest protests for diverting police resources and attention from terrorist threats. “There are flaws in the system.”

For the moment, the authorities are not giving answers to the deeper questions raised by Thursday’s murderous spree. But on Saturday, the political opposition leaped on the lapses, unleashing a round of fierce attacks on President Emmanuel Macron’s frequently under-fire interior minister, Christophe Castaner.

“What French citizen could think that this ministry is well run?” Eric Ciotti, a center-right member of Parliament, asked Saturday on French television. “This is not reassuring, in the face of what is an extreme menace to our country.”

Mr. Castaner told reporters after the attack that the “behavior” of Mikaël H. had not posed “problems.” But others said the man, deaf and frustrated that his handicap had prevented him from advancing in the police, had given off warning signs.

“When the minister said there was nothing abnormal about him, that’s false,” said another union official, Linda Kebbab.

“He wasn’t mean, and he wasn’t a conspiracist, but he was easily manipulated,” she added. “Everyone knew that he was troubled.”

On his Facebook page, held under a pseudonym that is an anagram of his name, a clenched black fist is accompanied by the slogan “Deaf Power.” There are exhortational Muslim videos, films about suffering in Syria and the Palestinian territories, and a curious video in which a line of smiling men tap one another on the shoulder and trace a line across their neighbors’ throats, in imitation of throat-cutting. That video was posted in June. At least one victim’s throat was slashed on Thursday.

People in the attacker’s neighborhood of low-rises in the northeastern Paris suburb of Gonesse said he was “nice,” “simple” and “someone who liked people.”

In 2009 he was brought before a local court on domestic violence charges but ultimately received no penalty, the prosecutor said. An acquaintance at his mosque said the man was “frustrated” at work because his handicap had prevented him from advancing. The night before the killing, neighbors heard him make religious utterances, the prosecutor said.

The killer’s activities on Thursday, captured by video surveillance cameras, unfolded calmly at first. He took the train from Gonesse at 8:22 a.m., arrived at the massive Police Headquarters in the heart of Paris shortly before 9, and went as usual to his office.

But then, around 11:20, he began exchanging the religious-themed texts with his wife. Shortly after noon he calmly left his office, walked across a bridge, bought an eight-inch kitchen knife and an oyster knife, and slipped back into the police building.

His colleagues in the office had stayed behind to have lunch at their desks. The killer slit the throat of one, a 50-year-old police major, and fatally stabbed another, a 38-year-old officer, in the abdomen. He then went into another office, stabbing a 37-year-old administrative employee, and descended the stairway toward the building’s giant courtyard. Along the way he stabbed to death a 39-year-old policewoman, the prosecutor said Saturday.

Once in the courtyard he threatened another employee with his knife. Ordered to drop the weapon by a young policeman, the killer first walked slowly toward him and then started to run, pointing his knife. The officer fired.