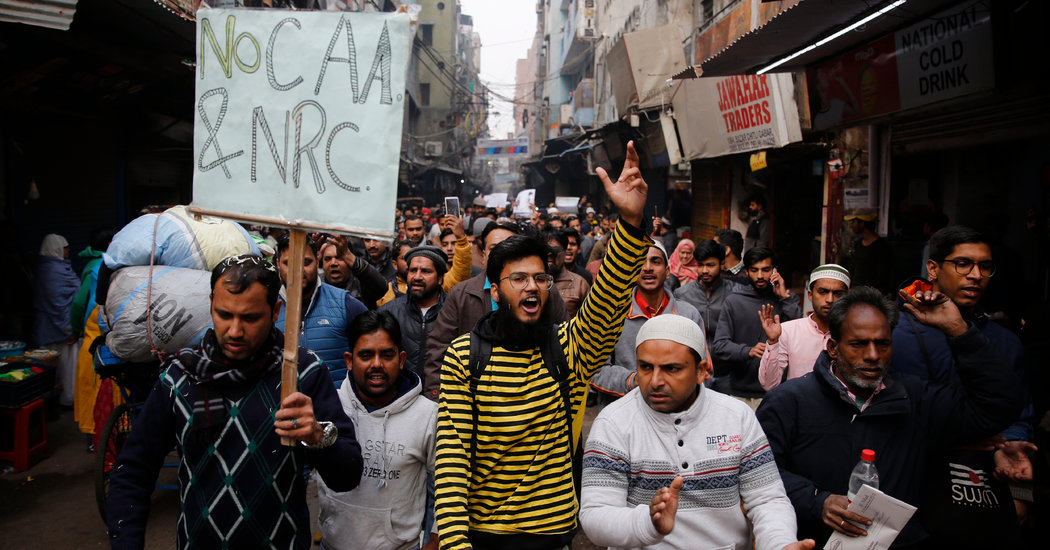 NEW DELHI — Rowdy protests against a contentious new citizenship law swept India on Thursday, and the authorities responded by shutting down the internet, barricading roads and arresting intellectuals, revealing an Indian government increasingly on edge.

In Bangalore, Ramachandra Guha, a pre-eminent biographer of Mohandas K. Gandhi and a critic of the citizenship law, was midsentence in speaking to a reporter when helmeted police officers carrying sticks grabbed his arms and dragged him away. It was all captured on video.

“Our protest is totally nonviolent,’’ Mr. Guha said, seconds before he was detained. “See what is happening. You see we are totally peaceful. Did you see any violence?’’

Mr. Guha was then put into a bus full of other detainees. He was released later in the day.

In New Delhi, the capital, demonstrators flocked to the historic Red Fort, chanting, “We want freedom!” and “The person who will walk the path of Hitler will die the death of Hitler!”

Anger, energy and opposition to the government are growing by the day. More and more Indians are pouring onto the streets of major cities, from Kolkata in the east to Kochi in the south, to express outrage at Prime Minister Narendra Modi’s government for pushing through a law that favors granting citizenship to South Asians of faiths other than Islam.

The government has responded to this week’s protests with riot officers and internet shutdowns. India tops the world — by far — in the number of digital lockdowns it has imposed, outpacing authoritarian governments such as Syria and Turkey.

Police officials in Delhi said that they had detained hundreds of people and converted a sports stadium into a temporary jail.

India’s Muslims, a minority in this vast country but, at 200 million, one of the largest Muslim populations in the world, have weathered an increasingly nasty campaign of abuse and discrimination on Mr. Modi’s watch.

Though Mr. Modi has denied any anti-Muslim bias, his political party is deeply rooted in a worldview that celebrates India as a homeland for Hindus, who make up about 80 percent of the population.

Many members of his Bharatiya Janata Party, including high-ranking officials, have uttered discriminatory comments about Muslims and even celebrated thugs who have beaten up or killed them. Mob lynchings of Muslims have increased in recent years as Mr. Modi’s party has dominated politics.

This week, the resentment in the Muslim community finally erupted. Tens of thousands of Muslims and Indians of other faiths have demonstrated against the new Citizenship Amendment Act, a core piece of Mr. Modi’s agenda.

The act creates a special path for citizenship for migrants from some of India’s neighboring countries if they are Hindu, Christian, Buddhist, Sikh, Parsee or Jain — in short, followers of any major religion in South Asia, bar one: Islam.

Many Muslims and progressive Indians call the law a dangerous step toward marginalizing an already fearful community and a blatant violation of India’s long commitment to secularism and equality, which is enshrined in its Constitution.

And many fear it may be just the beginning.

Amit Shah, the home minister and Mr. Modi’s right-hand man, has vowed to expand a contentious citizenship review process that has already left nearly two million people, from one state in northeastern India, potentially without a country.

Mr. Shah and other party officials have said the policy is not intended to discriminate against Indian Muslims. Rather, they say, it is needed to expel illegal immigrants from Bangladesh, India’s poorer, predominantly Muslim neighbor.

Many people believe that if the citizenship review goes nationwide, as Mr. Shah has repeatedly promised, it could strip many Indians of citizenship if they cannot produce the required documents, such as old birth certificates or real estate deeds.

Mr. Modi’s opponents say that the combination of the Citizenship Amendment Act, referred to as the C.A.A., and the citizenship review process — called the National Register of Citizens, or N.R.C. — could take away Muslims’ rights while allowing Hindus and followers of other faiths to stay in the country, with all legal protections.

In the past 10 days, several people have been killed or badly injured in protests against the government. Dozens of university students in New Delhi were beaten by police wielding wooden poles. Hundreds of people have been detained, including Yogendra Yadav, a well-known political commentator, Umar Khalid, a social activist, and several opposition politicians.

The authorities in New Delhi shut down the internet in several areas on Thursday, something that longtime residents of the capital said they could not remember happening before. Local officials shut down service to more than a dozen subway stations, and several school closures were announced for Friday.

On Thursday, Indian officials issued a statement that tried to defang the rising criticism of the citizenship measures. “No Indian citizen of any religion needs to worry at all either about C.A.A. or N.R.C.,’’ it said.

But the statement also made a national citizenship review sound like a fait accompli. “When N.R.C. comes, will I have to provide details of birth of parents etc. to prove my Indian citizenship?’’ read the statement, which was in question-and-answer format.

“Details of your birth like date/month and year and place of birth are enough,” the answer read. “If not available, you may have to provide such details of birth of parents.’’