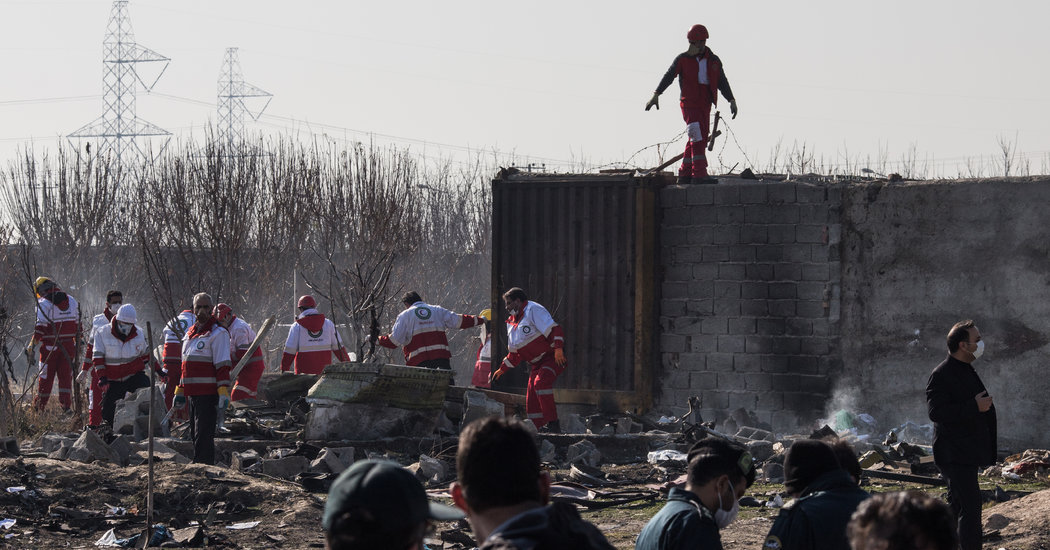 MONTREAL — There was a prominent Iranian writer who had emigrated with his family to Canada a few years ago. There were children traveling with their families.

The victims of a crash Wednesday morning of a Ukrainian Boeing 737-800 included passengers and crew from at least seven countries, among them 63 Canadians.

It is unclear what caused the crash of the Ukraine International Airlines flight, which was bound for Kyiv, the Ukrainian capital, and went down shortly after taking off from Tehran. All 176 people on board were killed. Conflicting theories of the cause were circulating on Wednesday.

The crash happened amid intensifying tensions between the United States and Iran, which on Tuesday attacked two bases in Iraq that house United States troops.

Vadym Prystaiko, Ukraine’s minister of foreign affairs, said the victims included 82 Iranians and 11 Ukrainians, including nine Ukrainian crew members. Sixty-three passengers were from Canada, 10 from Sweden, four from Afghanistan, three from Germany and three from Britain, he said.

In Canada, the crash was one of the worst losses of Canadian life in an aviation disaster. In 1985, a bomb exploded and killed 329 people aboard an Air India flight, mostly Canadians of Indian ancestry.

Among the dead in Wednesday’s crash were the wife and daughter of the Iranian writer Hamed Esmaeilion, a dentist who was celebrated as a leading writer of his generation.

Many among the 210,000 people who identify as Iranian in Canada fled Iran’s 1979 Islamic revolution. They live largely in the suburbs of the country’s three largest cities — Toronto, Montreal and Vancouver.

Payman Parseyan, a leading member of Edmonton’s Iranian community told the CBC, the Canadian broadcaster, that the community was devastated by the crash, whose victims, he said, included a 9- and 14-year-old girl as well as international students from Iran.

He said Iranian-Canadians had been glued to their television sets and communicating in search of news about loved ones. This is “devastating” for the Canadian Iranian community, he told the broadcaster.

Laing O’Rourke, a construction company based in Britain, confirmed in an email on Wednesday that Saeed Tahmasebi Khademsadi, 35, who worked at the company office in Dartford, died in the crash. Mr. Tahmasebi, a civil engineer at Laing O’Rourke, was a doctoral candidate at Imperial College in London, and a Farsi speaker, according to his Linkedin page.

Sam Zokaei, a reservoir engineer for BP, was also killed in the crash, the company confirmed in an email on Wednesday. Mr. Zokaei, an Arabic and Persian speaker who was on holiday in Iran, had been with BP for the past 14 years, according to his Linkedin profile.

Prime Minister Justin Trudeau of Canada offered his condolences to the families of the victims, saying Canadians were shocked and saddened. “Our government will continue to work closely with its international partners to ensure that this crash is thoroughly investigated, and that Canadians’ questions are answered,” he said in a statement.

François-Philippe Champagne, Canada’s foreign affairs minister, said he was in touch with the Ukrainian government and would keep Canadians informed as the situation becomes clearer.

“Our hearts are with the loved ones of the victims, including many Canadians,” he wrote on Twitter.

The Canadian ministry of foreign affairs has warned Canadians to avoid non-essential travel to Iran, citing “the volatile security situation, the regional threat of terrorism and the risk of arbitrary detention.”

Transport Canada, the country’s transport ministry, wrote on Twitter that Air Canada, the only Canadian air carrier that operates in the region, “had altered its routes to ensure the security of its flights into and over the Middle East.”

“We are monitoring the situation closely in the Middle East and are in close contact with the U.S. Federal Aviation Administration,” it wrote in a separate tweet.