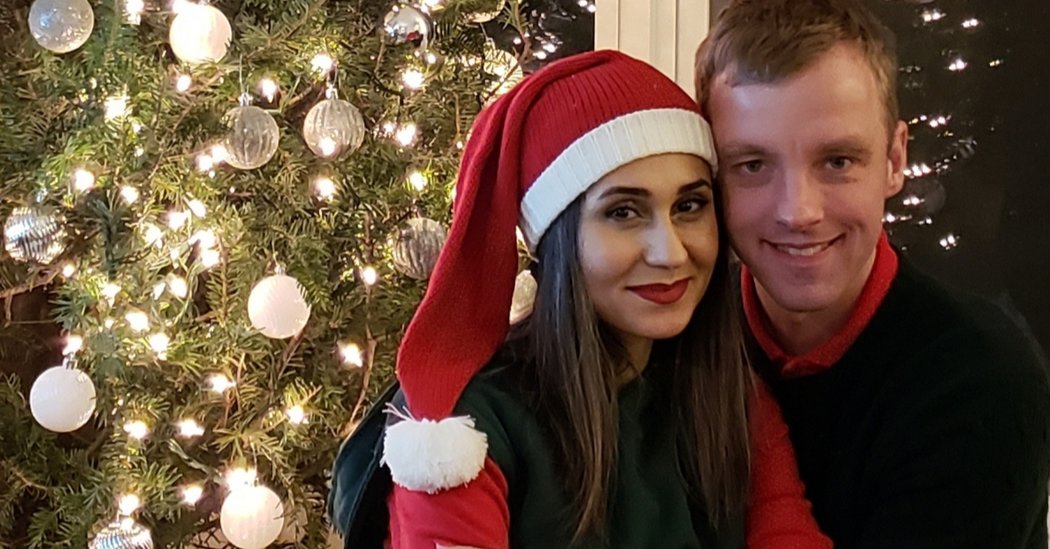 With the holidays and a long school break almost here and many families gathering together, we reached out to those who have been affected by President Trump’s travel ban to see how they and their relatives are managing.

Most of the people we heard from were Iranian or had ties to the country. Of the seven countries under the ban, which the Supreme Court upheld in June 2018, Iran has the biggest population, and Iranians have led the affected nationalities in visa applications and rejections.

We heard from a couple desperate to have a baby, but now divided by the ban. Grandparents have turned to Skype to get to know their grandchildren. And one software engineer at a large United States tech company said she and her husband had no choice but to move to a third country to be together.

The president enacted the ban as part of his anti-immigration platform, which its supporters have lauded, and he has continued to argue that the ban has been “very effective” as a national security tool.

Below is a selection of responses, lightly edited, from readers in Iran or with family there. Because of concerns over their immigration status, some requested to use only their first names or their initials.

Masoud Abdi, of Savoy, Ill., is a doctor and a legal permanent resident after winning the diversity visa lottery in 2010. He married his wife, a veterinarian in Iran, two years later. Her visa application is in limbo, he said. He works up to 12 hours a day, every day, to support both their households.

My wife is 42 years old and desperately wants to be a mother, but her time for this is very limited. Every day, when we talk to each other, she tells me how badly she wants to be a mother. It consumes her, and it breaks my heart that I cannot give her this wish.

My wife has become very depressed and she cries every day. She is so depressed that we no longer have good talks with each other.

I cannot explain in words how it all weighs on me emotionally. I am desperate. This makes me feel so helpless. I am destroyed inside, knowing this is even affecting her physical health. As a physician, I am familiar with the symptoms of depression, which I clearly see manifested in myself.

I am so disappointed in life. I wake up to support my wife, but really don’t have any hope to continue my life.

This fall I had to come back to the U.S. to deal with serious medical issues stemming from my time abroad. Due to the travel ban, my partner, the person I need by my side more than anyone as I’m coming to terms with my condition, can’t be with me. He is also suffering, feeling paralyzed, helpless and alone.

To quote my husband’s conversation with our cat before I left, “Well, boy, it’s just you and me again.”

While I am grateful to spend the holidays with my parents for the first time in many years, it won’t feel like a true celebration until my husband is by my side.

I keep buying Christmas gifts for him, unable to stop even though I don’t know when he will ever receive them.

Hedieh Yazdanseta grew up on Long Island and works for New York State. She and her husband, Mohsen Rahmani, have two children, including a 9-year-old boy named Aiden who has autism. She said her home was in foreclosure.

I have been separated from my husband for three years. My husband is banned, simply because he was born in Iran, a country he did not choose. I live in New York with our children.

This January will be our third wedding anniversary, yet we have never celebrated together. He’s never been to our home on Long Island and he’s not here to help raise our children.

We are living our most precious moments through FaceTime and losing our youth to a travel ban that’s meant to tear families apart.

I don’t have him beside me as I get my son tested, as our daughter plays in playoffs or as she performs at her school concerts. I don’t have him for birthdays, holidays, anniversaries, deaths in the family or simply to kiss good night.

Moving abroad to be together

Afsaneh S. had been living in the United States but moved to Paris two years ago so that she could live with her husband, who is from Iran.

We are having a baby together and while I want my baby to see his grandparents in the U.S., my husband cannot travel with us.

These two years were the hardest years of our lives.

I am a software engineer with a very high rank at one of the biggest tech companies, and the travel ban turned my whole life upside down.

Nazanin is a student in the United States. Her mother, who lives in Tehran, had previously been able to visit the United States, but now the pair stay in touch through phone calls and WhatsApp.

My mom was diagnosed with breast cancer during the first year of Trump’s presidency. It metastasized this summer through her brain and other organs.

She has no emotional support in Iran and I am her only child. I cannot travel since I am a student. If I leave the U.S., I would need to ask for a visa again and that could take a year or two and cost me my Ph.D.

Her only wish is to spend this hard time with me. She cannot travel to the U.S.

I see her face every day getting older and sicker. I cannot do anything about it.

Hediyeh is a Ph.D. student in Cortland, N.Y., and hasn’t seen her family in Iran in five years. Her sister applied for a visa under the Obama administration, but was then rejected when the ban took effect, she said.

I am scared that if I go home I won’t be able to get a visa to come back and finish my Ph.D.

I couldn’t go to my dad’s funeral and was left here to mourn far from my loved ones.

I missed the wedding of one of my nieces and still haven’t met my other niece’s baby girl.

I feel like I lost so much to be here. I cannot go on like this. I don’t deserve it. I think if Americans decide he should be their president again, I’ll leave.

The loss of involved grandparents

My daughter probably thinks grandparents are things that live inside Skype.

We are not a terrorist family. And this is not fair.

Arad Haselirad, of Simpsonville, S.C., had his first child, Ryan, in November 2018. His father, Parviz, lives in Mashhad, Iran, and hasn’t met his grandson. Parviz got a Ph.D. in English in the United States before returning to Iran in the 1980s. He’s now too sick to travel, and Arad fears he would be detained if he ever returned to Iran.

About a month ago, there were protests in Iran, so the government shut down the internet for almost a week. Consequently, I had no idea how my parents were doing. I was worried if they had been hurt in the protests, but there was no way to find out.

If this travel ban did not exist, I could bring my parents to the States to live with me and provide for them as they provided for me whenever they could.

But we feel trapped on both sides.
— Arad Haselirad

My son, Arad, decided to travel to Tbilisi, Georgia, in September 2018 to visit his mother. I was already too sick to travel for pleasure. My kidneys have shut down and I need to do dialysis three times a week. I wished he could travel to Iran, but as an Iranian-American there is a high risk of detention.

So, there is a good chance that I will pass without meeting him again.
— Parviz Haselirad

A time of uncertainty

Reza Pedram and Morvarid Sadafi, who are engaged, see each other only in foreign countries. Reza lives in Great Neck, N.Y., and applied for his fiancée’s visa in 2017. Reza said it becomes difficult to stay in touch with Morvarid in Tehran when protests break out there.

The hardship and pain both of us are experiencing due to the separation is unimaginable. It is too hard to be apart. Our lives are on hold and we cannot start anything new in our lives since we don’t know when and what is going to happen to us.
— Reza Pedram

Life is not easy, but when you’re waiting for something, it makes it harder. I’m waiting to start my married life with my fiancé.

I was accepted in the university, but I didn’t go since I was anticipating my visa would be issued soon. I also quit the job I loved in the same anticipation.

A year passed and nothing happened.

I got anxiety. When I went to the embassy for my interview last year and they told me I have to wait more. I got depressed. I’m seeing a psychologist and a psychiatrist, and I’m taking medication for my depression now.
— Morvarid Sadafi

Narges L. is pregnant with her second child and hoped her mother in Iran could visit her in Texas to be with her and meet Narges’s 7-year-old daughter.

My daughter asked her grandma to come. When we said she couldn’t, my daughter sent her a message. She wanted grandma to explain to the government that she is not a bad guy and that she just wants to see her granddaughters.

My daughter always said, “I want to be a president and let people come see their kids.”

Dreams for the future

Ricky Smith and Mona Khorasani are married but live on either side of the Canadian border. Ricky is the president of a civil engineering consulting firm based in Milwaukee, where he also grew up. Mona grew up in Tehran and earned her Ph.D. from Queen’s University in Kingston, Ontario, before joining a pharmaceutical company. She now lives in Toronto.

This Christmas Eve, instead of heading to my parents’ house in Milwaukee for dinner with my brother and sister before midnight Mass, I will be driving to the airport and catching a flight to Toronto in order to spend Christmas with my wife.

I have become all too familiar with the journey. This will be the fourth Christmas in a row and the 10th time this year that I have had to leave the United States and fly to Canada in order to see my wife, Mona.

My wife purchased Christmas gifts for my family before Thanksgiving, so that I could bring them back to Milwaukee and ensure my family receives them. Thank goodness for Christmas tree delivery services because my wife had to purchase our Christmas tree and get it in the stand, alone, so that we can decorate it together when I arrive in Toronto.
— Ricky Smith

Although the anxiety and uncertainty never leave, Ricky and I will not give up on our dreams.

Every day it feels as though we are stuck in middle of the ocean. We are continuously swimming in search of a land that we could call home. We have no idea what direction to swim, but we know that the moment we stop swimming, we will drown.

We will eventually find a home together, but will we ever get back our health, youth and years spent apart from each other?
— Mona Khorasani

A note to readers who are not subscribers: This article from the Reader Center does not count toward your monthly free article limit.