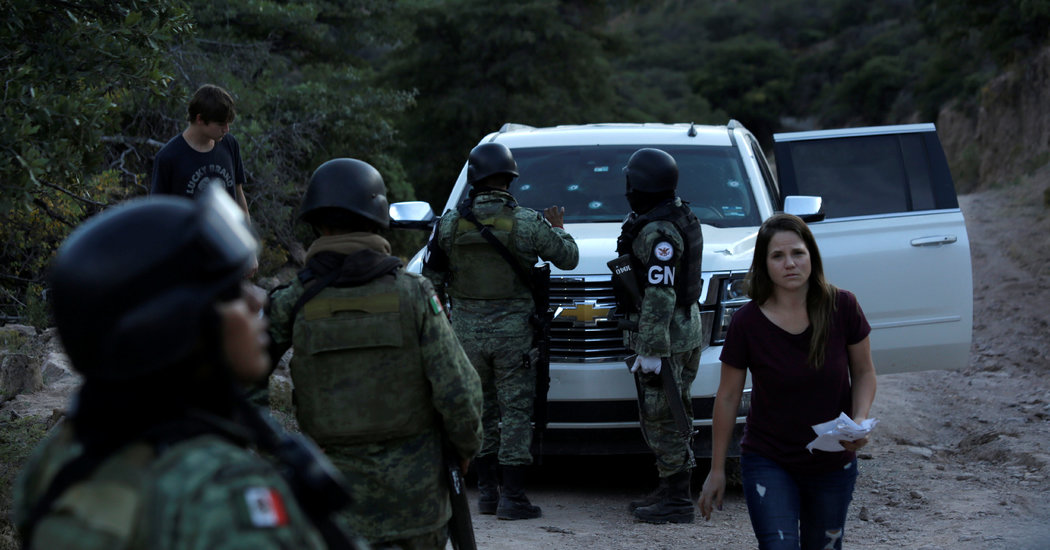 This week’s brutal ambush of a family in northern Mexico that left three women and six children dead was yet another shocking attack in a country enduring a year of record-setting violence.

The attackers, who are believed to be members of organized crime, opened fire on three vehicles the family was traveling in, according to relatives and government officials. Several other children were injured in the attack, the family said.

The victims were part of one extended family, which emigrated from the United States to the region decades ago as part of a diaspora of families that call themselves Mormon but are no longer affiliated with the Church of Jesus Christ of Latter-day Saints.

We asked readers their questions about the killings and the escalating violence in Mexico. Our reporters — Elisabeth Malkin and Kirk Semple in Mexico City and Elizabeth Dias in Washington — have answered a selection.

On violence in Mexico

Why is the violence getting worse? What needs to happen to reduce violence in Mexico?
— Ryan Gittler, Brick, N.J.

Worsening violence around Mexico in recent years reflects an increasingly volatile criminal landscape. A longstanding strategy of the Mexican government’s fight against organized crime was to go after kingpins, on the theory that cutting off the head of a criminal group would wither the body. But the tactic helped to fragment monolithic criminal enterprises primarily focused on drug trafficking into an array of groups that are more violent and uncontrollable.

And as criminal organizations have fragmented, they have also diversified their business models, branching out into a wider range of criminal enterprises including extortion, kidnapping, prostitution, fuel theft and migrant smuggling. Making matters worse, while violence was once concentrated in mostly a few places, the recent rise in homicides has been dispersed.

And there is one further element contributing to the rise in violence: Though clashes between remnant drug groups are widely thought to be a significant cause, analysts and government officials also point to other factors, including changes in political control of state and municipal governments in recent elections. As old political power structures make way for new ones, cooperation between corrupt officials and criminal groups falls apart, spurring violent struggles for new cooperative arrangements.

The solution to this spiraling violence has been elusive, to say the least. President Andrés Manuel López Obrador has said he would focus his crime-fighting strategy on addressing the problem at its roots, by investing in social development programs and initiatives that alleviate poverty. But this approach could take years to work — if it works at all.

Are violent drug cartels, and the risk of violence, equally divided in Mexico’s states? Or are there places where one can expect a safer existence?
— Robert McKelvey, Portland, Ore.

The situation varies drastically across the country. Violent drug cartels are most active along much of the border with the United States, and along the Pacific Coast.

Last year, a quarter of all murders in the country were concentrated in five cities: Tijuana and Ciudad Juárez on the U.S. border, and Cancún, Acapulco and Culiacán. Even in the case of Cancún, the tourist areas are fairly insulated from the city’s broader violence.

Although crime is rising in Mexico City, daily life is fairly safe, provided some precautions are taken. A few parts of the country, like Mérida, the capital of Yucatán state, are considered to be as safe as Europe.

That said, the situation in Mexico is fluid.

Not really. The increase in violence is nationwide. That said, migrants’ advocates have reported an increase in crimes committed against migrants who have been forced to wait in increasing numbers on the Mexican side of the border for their chance to apply for American asylum. And struggles between rival criminal groups for control of lucrative migrant-smuggling routes have led to some violence. But those dynamics would account for only a tiny percentage of the overall violence ravaging the country.

Is it safe for Americans to travel to Mexico?
— Anonymous

Yes, it is safe for Americans to travel in most parts of Mexico, although tourists should exercise caution, just as they would in some parts of the United States.

On religious groups in northern Mexico

Have there been other issues against Mormons in Mexico or is this truly random?
— Susan Murphy, Los Angeles

Authorities and the victims’ families do not yet know the motive of the crime.

There are many small communities of fundamentalist Mormon families in northern Mexico, and occasionally some have been caught up in the violence of organized crime in the region.

But many of the victims’ relatives told us about the peaceful environment they have experienced there.

The victims’ families are not affiliated with the Church of Jesus Christ of Latter-day Saints, the mainstream church headquartered in Utah, but a church spokesman said it was “heartbroken” to hear about the tragedy.

The victims’ extended family that lives in La Mora, their community in northern Mexico, is an independent fundamentalist Mormon group, meaning they are not affiliated with a specific church or prophet. The family itself is the religious community, and family members are its leaders. And obviously, the family is devastated.

Some family members worry that maybe their community is being targeted, but they do not yet know why, or the full details of what happened.

A note to readers who are not subscribers: This article from the Reader Center does not count toward your monthly free article limit.