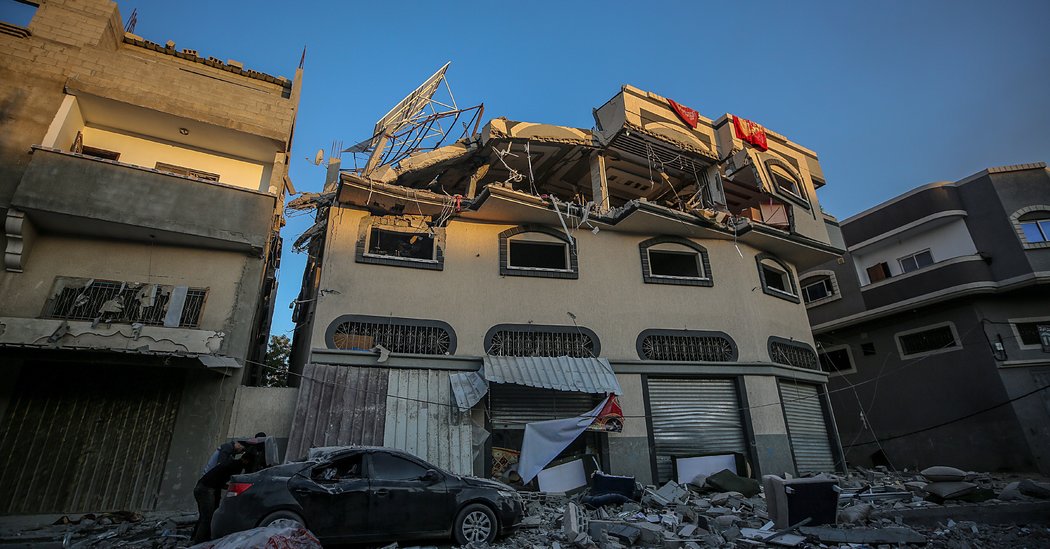 JERUSALEM — In a surprise strike before dawn on Tuesday, Israeli forces killed a senior commander of the Palestinian Islamic Jihad militant group in the Gaza Strip, setting off waves of retaliatory rocket attacks that immediately raised fears of an escalating new conflict.

Islamic Jihad said that the commander’s wife was also killed in the attack, which the Israeli military said was a missile strike from a fighter jet.

Right away, militants in Gaza began firing barrages of rockets toward southern and central Israel from the Palestinian coastal enclave. Islamic Jihad released a statement saying “our response to this crime will have no limits.” The group called the strike “a declaration of war against the Palestinian people.”

Bracing for a broader fight, the Israeli military said in a statement that it had deployed troops and was “prepared for a wide range of offensive and defensive scenarios.” Schools and businesses were closed in the Tel Aviv metropolitan area as air-raid sirens blared and Iron Dome missiles intercepted incoming at least 20 rockets, officials said. Tens of thousands of Israelis took cover in bomb shelters.

The Israeli military described the commander, Baha Abu al-Ata, as a “ticking bomb” who was “responsible for most of the Palestinian Islamic Jihad’s activity in the Gaza Strip.” The group is listed as a terrorist organization by many countries, and is supported by Iran.

The military said Mr. Abu al-Ata was to blame for rocket fire toward the Israeli border town of Sderot in August and early November, and he was being closely monitored over the past week because he was planning a specific new attack against Israel.

Militant groups in Gaza have clashed with Israel several times in recent years, with the last deadly conflagration taking place over several days in May. A devastating war in the summer of 2014 lasted 50 days and ended with a fragile cease-fire that has since been broken many times.

Targeted strikes against militant leaders have led to war before. In 2012, an Israeli airstrike that killed Ahmed al-Jabari, the Hamas military commander at the time, became the opening shot of an eight-day war.

A spokesman for the Israeli military, Lt. Col. Jonathan Conricus, said the attack on Tuesday was timed to minimize the chance of other deaths or injuries. He said the military was aware of and looking into reports of “other casualties,” including Mr. Abu al-Ata’s wife.

Islamic Jihad also blamed Israel for another missile attack at dawn on Tuesday on the Damascus home of Akram al-Ajouri, describing him as a member of the group’s political bureau in Syria.

Mr. Ajouri was reported to have survived the attack. Sana, the official Syrian news agency, reported that a son of Mr. Ajouri and another civilian were killed in the attack. Mr. Ajouri is said to be the direct superior of Mr. Abu al-Ata. The Israeli military refused to comment on the attack in Damascus.

The only confirmed Israeli casualties as of midmorning involved people who suffered minor injuries as they raced to shelters or who were treated for panic or fainting, officials said.

Around 11 a.m., the Israeli military said it carried out another airstrike in Gaza against what it said were two Islamic Jihad operatives from the group’s rocket unit. Health officials in Gaza put the casualties there at three dead so far, suggesting one of the two had been killed, and 18 wounded.

An hour later, the military said it was striking more Islamic Jihad targets in the Gaza Strip.

Islamic Jihad described Mr. Abu al-Ata as one of the most prominent members of the movement’s military council and the group’s commander of the northern region of the Gaza Strip. But Israel said his purview and authority was broader than that title suggested.

In recent weeks Mr. Abu al-Ata had seemed increasingly like a marked man, judging from the reporting of Israeli military correspondents.

“We tried to message and to communicate to him and his superiors that we were aware of his plans, and to indicate that continued attempts to execute those plans would have consequences,” Colonel Conricus said, adding that Mr. Abu al-Ata’s name had been mentioned frequently in the news media “not by mistake.”

Hamas, the larger Islamic militant group that dominates in Gaza, said that it, too, mourned Mr. Abu al-Ata’s death and that his killing would not go unpunished. Islamic Jihad and Hamas are uneasy rivals in Gaza, but in times of hostility with Israel, the groups tend to make common cause.

Giora Eiland, a retired Israeli general and former national security adviser, said that unlike Hamas, which has a strong and popular political component, Islamic Jihad “is purely a terrorist organization. It has no real political agenda, and more important, Islamic Jihad is fully supported by Iran and fully subordinated to Iranian instructions.”

He said that Islamic Jihad had been developing an increasingly independent approach to the conflict with Israel, ignoring the implicit understandings between Israel and Hamas to try to avoid escalation, and that Mr. Abu al-Ata had carried out some surprise attacks of his own in recent months.

Mr. Eiland said he believed that the Damascus attack was also carried out by Israel, and said that Islamic Jihad personnel in Syria had a direct connection with Iran and gave instructions to the group’s members in Gaza.

The killing of Mr. Abu al-Ata came after a period of relative quiet along the border, though there had been some sporadic rocket fire of late out of Gaza, a tiny Palestinian enclave along the Mediterranean coast.

Prime Minister Benjamin Netanyahu’s office said the attack had been carried out on the recommendation of the military chief of staff and the head of the Shin Bet internal security agency, and with the approval of the Israeli cabinet.

In the hours after the attack masked militants of Islamic Jihad surrounded the two-story building where Mr. Abu al-Ata and his wife were killed. It is in Shejaiya, a neighborhood east of Gaza City that saw fierce battles during the 2014 war.

Mutassem Hilis, 23, a university student and a neighbor of the Abu al-Ata family in Shejaiya, said he was woken up by the blast. Mr. Hilis said he came out of his building and saw Mr. Abu al-Ata’s body on the sidewalk. One of Mr. Abu al-Ata’s young sons lay injured on the ground, and was later driven off to hospital, he said. The body of Mr. Abu al-Ata’s wife was found in a school opposite the family house.

Within Israel, the violence Tuesday occurred in a moment of heightened political tension, as Mr. Netanyahu fights for his political life. He is leading a caretaker government after two elections, in April and September, ended inconclusively. He has been determined to remain prime minister under any possible coalition agreement that may emerge, and he faces a looming indictment in three graft cases, possibly by the end of this month.

Benny Gantz, a centrist former Israeli army chief of staff who defeated Mr. Netanyahu in the September election, now is seeking to form a government and possibly force Mr. Netanyahu from power for the first time in a decade.

One controversial option for Mr. Gantz would be to form a minority government relying on the support of Arab lawmakers from outside his coalition. On Monday, Mr. Netanyahu assailed this prospect, saying such a government would be “a danger to Israel’s security.”

The viability of that path to a coalition seemed in question Tuesday morning.

Mr. Gantz expressed support for the military action against Palestinian Islamic Jihad. He wrote on Twitter that the political echelon and the military had “taken a correct decision tonight for the security of Israel’s citizens and the residents of the south.”

But the leader of the mainly Arab Joint List, Ayman Odeh, called the strike politically motivated. “A cynical man who lost two consecutive elections will leave only scorched earth in a desperate attempt to remain in office,” he wrote on Twitter.

Still, the possibility of a unity government in which Mr. Gantz would join forces with Mr. Netanyahu, and perhaps even allow Mr. Netanyahu to remain in the top office for a limited period of time, may just have increased given the security flare-up. And few Israelis want a third election.

Mr. Netanyahu had been serving as both prime minister and defense minister for the past year. Days ago, he appointed Naftali Bennett, an often provocative right-wing politician and former education minister who has long urged a more aggressive approach to Gaza, to the defense ministry post, in a move that analysts said was designed to shore up Mr. Netanyahu’s right-wing bloc of allied parties. But the military said that Mr. Netanyahu alone gave approval for the strike in Gaza on Tuesday.

Despite Mr. Gantz’s support, questions were already being raised by other Netanyahu critics about the timing of the attack.

Omer Barlev, a Labor Party legislator, wrote on Twitter that Mr. Abu al-Ata had been in the military’s sights for a long time: “In the past year and a half there have been numerous opportunities to eliminate him as well as other senior jihad and Hamas officials, but the Cabinet has refrained from doing so. Why did Netanyahu change his position now?”

Adding that Mr. Gantz had seven days left of his allotted time to form a government, Mr. Barlev said, “The answer is unfortunately clear.”