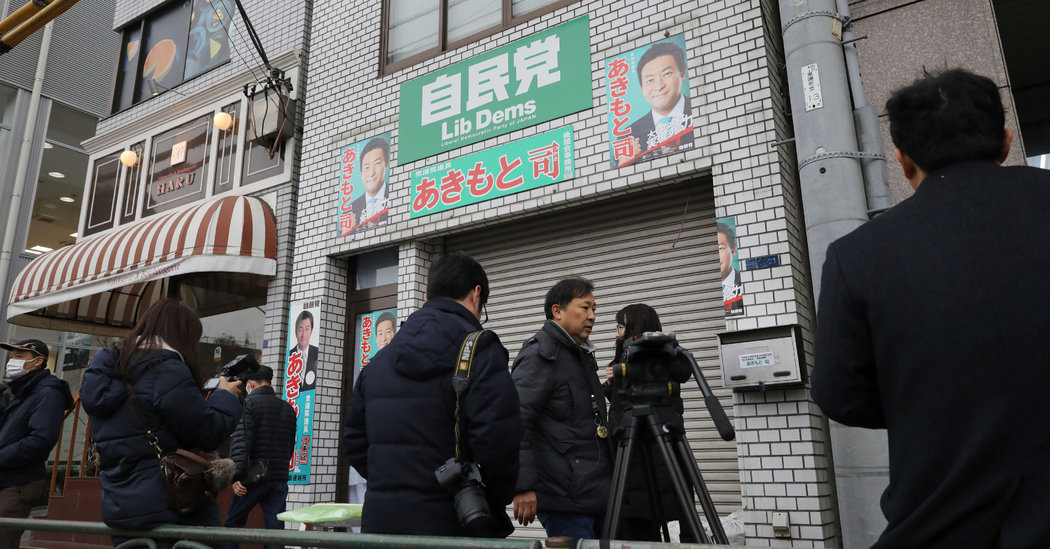 TOKYO — A member of Japan’s Parliament was arrested Wednesday on suspicion of taking bribes from a company that wanted to build one of the first casinos in Japan, which legalized them just three years ago.

Prosecutors arrested the lawmaker, Tsukasa Akimoto, of the governing Liberal Democratic Party, on allegations of accepting about $34,000 in cash and other gifts from the company, which was not identified in documents filed by prosecutors. Mr. Akimoto, who has yet to be formally charged, has denied wrongdoing.

Parliament legalized casino gambling in 2016 despite public opposition, and Mr. Akimoto’s arrest could be a blow to the nascent industry. Lawmakers put significant restrictions on casino licensing to address concerns about the potential for money laundering and gambling addiction, and no casinos have yet opened.

Documents filed by prosecutors outline a plan by three men associated with the unnamed company to secure Mr. Akimoto’s help with its project — building a casino on the northern island of Hokkaido — in exchange for gifts. All three men have been arrested.

NHK, the Japanese public broadcaster, reported that the company was 500.com, a Chinese company specializing in online sports betting. The company declined to comment on Wednesday.

Mr. Akimoto, 48, is a member of the lower house of Parliament, where he was an advocate of legalizing casinos. Prosecutors say that the bribery occurred in 2017 and 2018, when he was a senior official at the country’s tourism ministry, overseeing efforts to develop the casino industry.

Japanese prosecutors raided Mr. Akimoto’s office last week over suspicions that an associate had smuggled cash into the country. Before his arrest, Mr. Akimoto wrote on Twitter, “I have not participated in anything illegal at all.” He quit the Liberal Democratic Party on Wednesday.

Also Wednesday, prosecutors searched the office of Takaki Shirasuka, a lawmaker from the same party, as part of the investigation, according to Kyodo News.

When lawmakers legalized casino gambling in 2016, they cited a need to stimulate Japan’s sluggish economy and find new sources of revenue. Some forms of gambling are legal in Japan, including lotteries and betting on certain kinds of races. And the authorities have long turned a blind eye to gambling in Japan’s ubiquitous pachinko parlors.

But the decision to allow blackjack, roulette and other table games into Japan opened up a potentially enormous new market for casino operators around the world. Analysts have said that it could be worth as much as $40 billion and rival Macau, China, as Asia’s gambling capital. The American companies MGM, Las Vegas Sands and Wynn Resorts joined competitors from China and Australia in jostling to enter Japan first.

To appease opponents of casino gambling — including Komeito, a Buddhist political party allied with the Liberal Democratic Party — legalization came with caveats. Casinos must be part of “integrated resorts” featuring other attractions, like hotels, shops and conference centers, and only three licenses would be granted, at least initially.

NHK reported that Mr. Akimoto had traveled in December 2017 to the Chinese city of Shenzhen, where he met with representatives from 500.com. A few months later, he met with officials from a village in Hokkaido where the company hoped to develop a resort, it said.

Japan’s chief cabinet secretary, Yoshihide Suga, declined to answer questions about the case during a regular news conference on Wednesday, but he said there was no rule preventing officials from associating with industry representatives. He also said the government would “steadily progress” toward the goal of opening casinos.

In November, Hokkaido announced that it would not pursue the development of an integrated resort for the time being, citing environmental concerns. That leaves Osaka and Yokohama, among other places, in the running to host the first three resorts. Final bid proposals are expected to be submitted to the government by early 2021.