China has spent heavily to help its poorest citizens, an approach that few developing countries can afford and even Beijing may struggle to sustain.

JIEYUAN VILLAGE, China — When the Chinese government offered free cows to farmers in Jieyuan, villagers in the remote mountain community were skeptical. They worried officials would ask them to return the cattle later, along with any calves they managed to raise.

But the farmers kept the cows, and the money they brought. Others received small flocks of sheep. Government workers also paved a road into the town, built new houses for the village’s poorest residents and repurposed an old school as a community center.

Jia Huanwen, a 58-year-old farmer in the village in Gansu Province, was given a large cow three years ago that produced two healthy calves. He sold the cow in April for $2,900, as much as he earns in two years growing potatoes, wheat and corn on the terraced, yellow clay hillsides nearby. Now he buys vegetables regularly for his family’s table and medicine for an arthritic knee.

The village of Jieyuan is one of many successes of President Xi Jinping’s ambitious pledge to eradicate abject rural poverty by the end of 2020. In just five years, China says it has lifted from extreme poverty over 50 million farmers left behind by breakneck economic growth in cities. 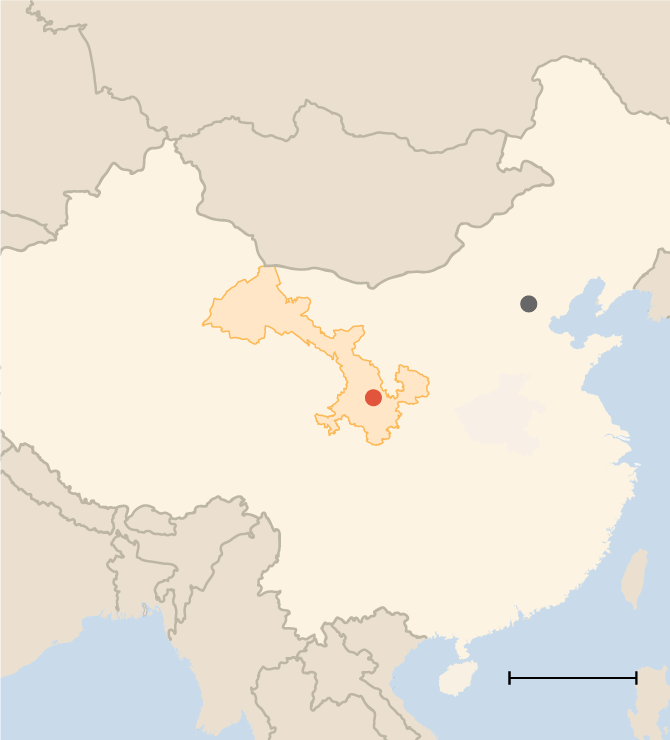 But the village, one of six in Gansu visited by The New York Times without government oversight, is also a testament to the considerable cost of the ruling Communist Party’s approach to poverty alleviation. That approach has relied on massive, possibly unsustainable subsidies to create jobs and build better housing.

Local cadres fanned out to identify impoverished households — defined as living on less than $1.70 a day. They handed out loans, grants and even farm animals to poor villagers. Officials visited residents weekly to check on their progress.

“We’re pretty sure China’s eradication of absolute poverty in rural areas has been successful — given the resources mobilized, we are less sure it is sustainable or cost effective,” said Martin Raiser, the World Bank country director for China.

Beijing poured almost $700 billion in loans and grants into poverty alleviation over the past five years — about 1 percent of each year’s economic output. That excludes large donations by state-owned enterprises like State Grid, a power transmission giant, which put $120 billion into rural electricity upgrades and assigned more than 7,000 employees to work on poverty alleviation projects.

The campaign took on new urgency this year as the country faced devastation from the coronavirus pandemic and severe flooding. One by one, provinces announced they had met their goals. In early December, Mr. Xi declared that China had “achieved a significant victory that impresses the world.”

But Mr. Xi acknowledged further efforts were needed to share wealth more widely. A migrant worker in a coastal factory city can earn as much in a month as a Gansu farmer earns in a year.

Mr. Xi also called for officials to make sure that newly created jobs and aid for the poor did not fade away in the coming years.

Gansu, China’s poorest province, declared in late November that it had lifted its last counties out of poverty. Just a decade ago, poverty in the province was widespread.

Hu Jintao, China’s leader before Mr. Xi, visited people living in simple homes with few furnishings. Villagers ate so many potatoes that local officials were embarrassed when a young girl initially refused to eat yet another one with Mr. Hu in front of television cameras because she was tired of them, according to a cable disclosed by WikiLeaks.

Though many villages are still reachable only by single-lane roads, they are lined with streetlights powered by solar panels. New industrial-scale pig farms, plant nurseries and small factories have sprung up, creating jobs. Workers are building new houses for farmers.

Three years ago, Zhang Jinlu woke in terror when the rain-weakened mud brick walls of his home gave way. Half the roof timbers came crashing down with slabs of dirt, narrowly missing him and his mother.

Officials in Youfang village built a spacious new concrete house for them, complete with new furniture. Mr. Zhang, 69, now receives a monthly stipend of $82 through the poverty program. His original house was rebuilt for him as a storage shed.

“This house used to be dilapidated, and it leaked when it rained,” Mr. Zhang said.

Lu Yaming, the company’s legal representative, said Tanyue receives at least $26,000 a year in subsidies from poverty alleviation programs — out of which $500 a year was paid to each of the 17 villagers deemed impoverished.

But the viability of these factories without ongoing aid is far from clear. Until the subsidies arrived, the factory frequently had trouble paying wages on time, Mr. Lu said.

Inevitable questions swirl over whether some families have used personal ties to local officials to qualify for grants. Corruption investigators punished 99,000 people nationwide in connection with poverty relief efforts last year, according to official statistics. At local eateries in communities like Mayingzhen, where a heavily seasoned platter of fried donkey meat costs $7, the talk is all about who received what, and whether they really should have qualified.

While the poverty alleviation program has helped millions of poor people, critics point to the campaign’s rigid definitions. The program assists people classified as extremely poor at some point from 2014 to 2016, without adding others who may have fallen on hard times since then. It also does very little to help poor people in big cities where wages are higher but workers must pay far more for food and rent.

According to the government’s complicated criteria for determining eligibility for aid, anyone who owned a car, had more than $4,600 in assets or had a new or recently rebuilt house was excluded. People hovering just above the government’s poverty line continue to struggle to make ends meet, but are often denied help with housing or other benefits.

Zhang Sumei, a 53-year-old farmer, earns $1,500 a year growing and selling potatoes and had to use her savings to build her home in concrete. She says that she should have qualified for aid for the extremely poor. Farming Gansu’s notoriously infertile soil is hard and difficult.

“In this society, poor families are designated by cadres, and we have nothing,” she said bitterly.

The party’s campaign-style approach also fails to tackle deep-seated problems that disproportionately hurt the poor, including the cost of health care and other gaping holes in China’s emerging social safety net. Villages provide limited health insurance — only 17 percent of the cost of Mr. Jia’s arthritis medicine is covered, for example. Hefty medical bills can ruin families.

Yang Xiaoling, a 48-year-old worker who works at another government-subsidized factory in Gansu, wept uncontrollably as she described the crippling debt she faced after paying medical fees for her husband, who suffered kidney failure.

Three years ago, she borrowed $7,700 at zero interest from a bank affiliated with the poverty alleviation program and was supposed to invest the money in buying livestock. But instead she borrowed more money from relatives and then spent all the money on a kidney transplant and medicine for her husband.

Now the entire loan is due and she has no money to repay it. Follow-up medical treatments for her husband consume her entire salary. So the couple and their three children and her husband’s invalid parents subsist on monthly government poverty assistance payments of less than $50 per person.

“I don’t have the ability to pay it back. I can’t help it,” Ms. Yang sobbed. “I have already borrowed a lot of money, and now no one lends me money.”

Despite the challenges, the poverty relief program may have a long-term political benefit that helps to ensure some of it survives. Gratitude for the program seems to be reinforcing the political power of the party in rural areas.

In Youfang, Mr. Zhang was quick to praise not just the poverty program but also Mr. Xi, comparing him to Mao.

“It is good for the country to have Xi Jinping,” he said, “and the national policy is good.”