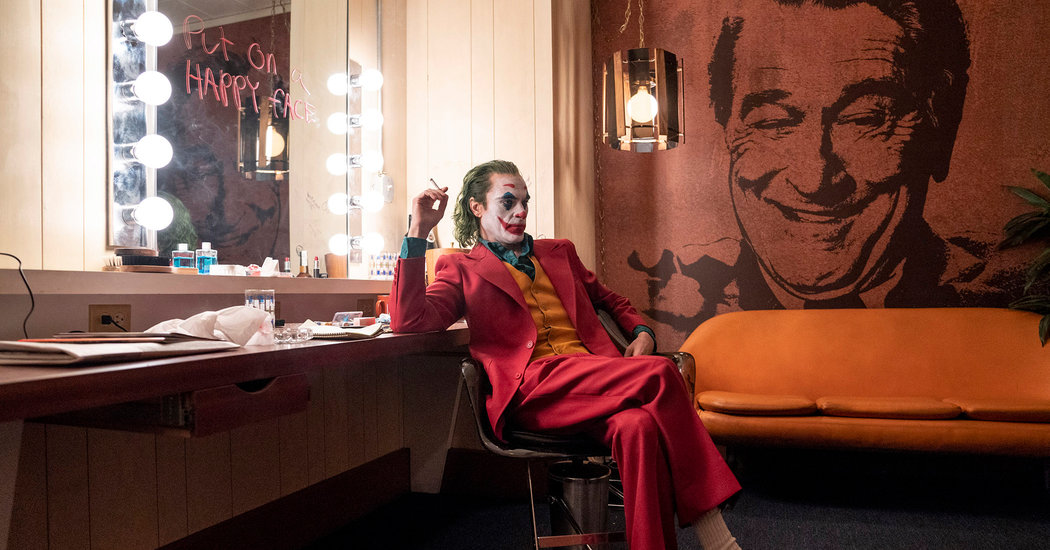 LOS ANGELES — Hollywood’s latest comic book movie, “Joker,” arrives in multiplexes on Thursday night, and it has all the makings of a juggernaut.

The R-rated film, which portrays the DC Comics villain as sharing the psychological traits of real-life mass shooters, is expected to collect at least $80 million in the United States and Canada by Sunday. If the film reaches that total, it would give Warner Bros. its biggest non-sequel opening in two years. “Joker” has artistic legitimacy, having won the top prize at the Venice Film Festival last month. Its star, Joaquin Phoenix, has been singled out as a surefire Oscar nominee.

But “Joker” is also causing deep unease. Some people, including a few rank-and-file employees on the Warner Bros. lot, worry that the violent, hyper-realistic movie is potentially dangerous — that rather than critiquing the societal failings that have given rise to America’s mass-shooter crisis, the film legitimizes such atrocities and could provoke more of them.

Amid the critical praise are scorching reviews that use words like “irresponsible.” The F.B.I. has warned about ugly online chatter surrounding “Joker,” prompting the police in cities including New York and Los Angeles to step up theater security and reigniting the debate over First Amendment rights versus Hollywood accountability. Relatives and friends of those killed during the 2012 movie theater massacre in Aurora, Colo., sent a letter to Warner Bros. expressing disquiet over “Joker” and its empathetic depiction of the character.

Warner Bros. has gone on the defensive. “It is not the intention of the film, the filmmakers or the studio to hold this character up as a hero,” the studio said in a statement.

It was very much the intention, however, to make an audacious, boundary-pushing movie — one that could cut through the deluge of Netflix-Amazon-YouTube streaming content and get people out to movie theaters to buy tickets. When in doubt, sharpen the edges: “Joker” will be followed on Oct. 18 by “Jojo Rabbit,” a Holocaust dramedy with slapstick Nazis from Fox Searchlight, and on Nov. 27 by “Queen & Slim,” a searing Universal drama that depicts racially charged police violence. “The Hunt,” about a group of “globalist elites” killing people for sport, would be in theaters now, but Universal canceled its release after mass shootings in El Paso and Dayton, Ohio.

“Joker” got its start in 2016, when Todd Phillips, who had directed men-behaving-badly comedies for Warner Bros. like “The Hangover” and “Old School,” told Greg Silverman, then the studio’s president of creative development and production, that he had a wild idea. Mr. Phillips wanted to make a gritty character study of the Joker in the mold of “Taxi Driver,” dispensing with the cartoon, buildings-imploding fantasy of most superhero movies and placing the story more squarely in the real world.

“A way to sneak a real movie in the studio system under the guise of a comic book film,” as Mr. Phillips recently recalled in an interview with The Wrap, an entertainment news site.

In particular, Mr. Phillips wanted to give the Joker a new back story, one that ended up making the character strikingly similar to disturbed young men who were perpetrating mass killings in real life, including the one who carried out the Aurora massacre. (In the comics, the villain falls into a vat of chemicals and comes out a disfigured maniac.) As the violence escalates in “Joker,” the character becomes a hero to the disenfranchised.

Mr. Silverman and Kevin Tsujihara, then the studio’s chairman, were stunned. It had been widely reported at the time of the Aurora massacre that the gunman, whose hair was dyed reddish orange, had told the police that he was the Joker. That account was later debunked, but the character was still associated with the episode in the public consciousness. How did Mr. Phillips possibly expect the studio to buy into his idea? Warner Bros., after all, sold Joker pajamas at Walmart.

But they gave him permission to proceed with a script. The discussion with Mr. Phillips came as Warner Bros., once the dominant studio in Hollywood, had begun to sputter. Trying to compete with Disney with films like “Pan” was proving disastrous. Marvel was soaring by using a lighthearted formula while Warner Bros. had seemed to lose its superhero touch, most recently delivering the critically reviled “Batman v. Superman: Dawn of Justice.” The rise of Netflix, and the overreliance by studios on bloated sequels and reboots, were starting to keep ticket buyers on their living room sofas.

In the past, some of Warner’s most lasting hits came by leaning into risk and producing films that wowed audiences while saying something sharp about the broader culture. Warner Bros. was the studio that made “Natural Born Killers” (1994), about the media’s egging on a couple on a murderous spree, and had backed “A Clockwork Orange,” Stanley Kubrick’s 1971 movie about violent young sociopaths. Maybe part of the way forward for Warner Bros. was to embrace its rabble-rousing past.

“Original visions, strange visions — that’s why a lot of us fell in love with the movies in the ’70s,” said Marty Kaplan, the Norman Lear professor of entertainment, media and society at the University of Southern California. “There’s starting to be a bit of a return to that as some of the studios look for different, noticeable, sharp. Who has a bold take on the world that speaks to the part of our psyche that we ourselves don’t understand?”

Warner Bros. agreed in March 2018 to make “Joker,” with the studio’s new marketing chief, Blair Rich, emerging as a vocal proponent and Toby Emmerich, the new chairman of the movie division, judging the script as too good to pass up, according to four people involved in the project, who spoke on the condition of anonymity to maintain relationships.

Still, there was division among the ranks, the people said. Other senior executives were disconcerted by the level of violence and ultra-bleak tone. They were also dealing with an unhappy Jared Leto, who plays the Joker in the studio’s ensemble “Suicide Squad” series and was not keen to have a competing performance.

But the company did take measures to mitigate the risk.

Warner Bros. brought on two co-financiers, Bron Studios and Village Roadshow, reducing the studio’s exposure — and its potential profits. The movie cost $55 million to make, a modest amount for a major production.

By the time Warner Bros. began revving up its marketing engines for “Joker” in late August, however, the cultural and political landscape in the United States had grown even more heated, making Mr. Phillips’s nihilistic movie feel even more on the nose. Fears about safety in public spaces had increased after a rash of mass shootings, including one at a California agricultural festival and one at a Walmart that left 22 dead.

“Joker” also arrives at a time of heightened tension at Warner Bros. The studio has a new owner (AT&T completed its takeover of WarnerMedia last year) and a new chairman: Ann Sarnoff, a Hollywood outsider, took over in August. Mr. Tsujihara resigned under pressure in March, leaving some executives in the movie division reeling. AT&T has new mandates for the studio, which is expected to begin shifting some production away from theatrical distribution and toward a new streaming service. Warner Bros. has also struggled at the box office in recent months. Misfires include “The Goldfinch,” “Shaft” and “The Kitchen.”

The “Joker” publicity campaign has been tumultuous. When a film critic for a British newspaper asked Mr. Phoenix an uncomfortable question at a press junket — was he worried the film might “perversely end up inspiring exactly the kind of people it’s about, with potentially tragic results”? — the star walked out of the interview. The critic, Robbie Collin, said it took “an hour’s peace-brokering” with a Warner Bros. publicist to resume the conversation.

In other interviews, Mr. Phoenix appeared more at ease with the topic. “If you have somebody that has that level of emotional disturbance, they can find fuel anywhere,” he told IGN, a video game and entertainment news site.

Warner Bros. was forced to address the matter when the Aurora parents went public with their letter, even though the missive made clear that it supported the studio’s right to free speech. Other Aurora parents told reporters they were O.K. with “Joker.”

“Make no mistake: Neither the fictional character Joker nor the film is an endorsement of real-world violence of any kind,” the studio said in its statement. “At the same time, Warner Bros. believes that one of the functions of storytelling is to provoke difficult conversations around complex issues.”

The studio then barred reporters from the red carpet at a premiere for the movie on Saturday in Los Angeles. “I think it’s time to let the film speak for itself,” Mr. Phillips said in a brief introduction inside the theater.

Most theater chains have declined to comment, as has the National Association of Theater Owners. AMC, the nation’s largest theater owner, declined to speak directly about “Joker,” instead releasing a statement that said, “Working with law enforcement, AMC has a number of safety and security protocols in place at all of its theaters.”

The Alamo Drafthouse chain bluntly reminded its customers that “Joker” is not a typical comic book movie.

“There’s lots of very, very rough language, brutal violence and overall bad vibes,” Alamo said on social media on Tuesday. “It’s not for kids, and they won’t like it anyway. (There’s no Batman.)”