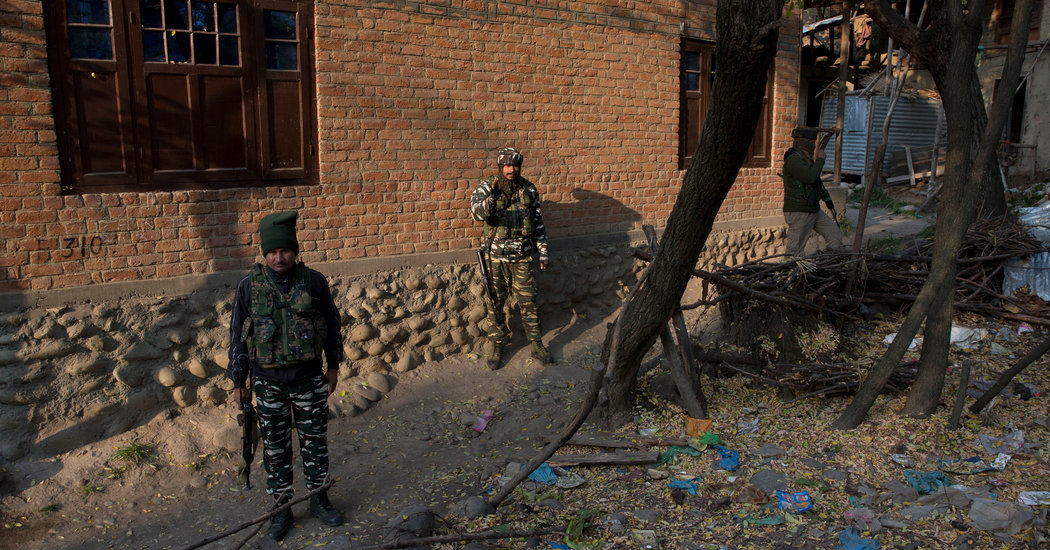 The construction workers, who came from India’s West Bengal State, hundreds of miles away, were pulled from their shared apartment in south Kashmir and shot, according to witnesses and an official.

For weeks, militants have threatened to attack people who try to reopen their businesses or otherwise return to life as normal in Kashmir, hoping to maintain a crisis state and intensify active resistance to the Indian government.

“Blood was everywhere,” said Abdul Salaam Bhat, the village head of Katrasoo, where the attack took place. “It was as if someone had slaughtered dozens of sheep.”

Kashmir has been in crisis since Aug. 5, when the Indian government announced that it would strip the state of Jammu and Kashmir of its decades-old special status and split the territory into two federally controlled enclaves. That move officially takes effect on Thursday.

Anticipating unrest in the wake of the August announcement, Indian officials deployed more troops in the Muslim-majority Kashmir Valley, home to several million people, cut internet and phone connections and rounded up thousands of Kashmir’s public figures. Activists said many of the arrests were illegal.

Seeing the government’s actions as an undemocratic betrayal, Kashmiris took to the streets to vent their anger at the security forces. Many on both sides have been hurt in skirmishes.

The Indian government has insisted that its decision was intended to improve governance in Kashmir, which is also claimed by Pakistan, and to cut down on militancy. Tens of thousands of lives have been lost in violence over Kashmir, including wars between Pakistan and India.

But since August, civilians have found themselves increasingly caught between Indian security forces and militants who are intent on punishing the government. For decades, Kashmiri separatists, some supported by banned Pakistani groups, have waged a campaign for independence.

Recently, Kashmiris have been threatened and even attacked for trying to reopen their businesses after some of the communications restrictions were lifted. In the last two weeks, militants have killed at least 11 traders, laborers and truck drivers. They have also targeted Kashmiris working in the apple industry, urging them not to sell their produce.

On Tuesday, hundreds of protesters clashed with security forces on the streets of Srinagar, the capital of Indian-administered Kashmir, after news spread that the government had allowed a group of mostly far-right European lawmakers representing parties with histories of anti-Muslim rhetoric to visit the city.

Though the Indian government has insisted that Kashmir is returning to normal, foreign journalists continue to be barred from stepping foot in the region. A United States senator, Chris Van Hollen, was also blocked from visiting this month.

It is still unclear why militants targeted the migrant laborers on Tuesday. Mr. Bhat, the village head in Katrasoo, said they had lived in the area for years and resisted leaving Kashmir even after security was beefed up in August and thousands of others left.

On Tuesday evening, the group was preparing for a trip to West Bengal when the militants stormed the men’s home, dragged them outside, lined them up and shot them, witnesses said. One worker survived, and was in critical condition.

“No one has taken responsibility for the attack, nor do we have any leads,” said Gurinderpal Singh, a senior police officer in the district of Kulgam, where the attack occurred.

For now, businesses in Kashmir are still largely shut. Many markets are only open for a few hours each morning. Public transport remains limited. And with such a large security presence, parents are afraid to send their children to school, where classrooms are mostly empty.

On Wednesday, hundreds of migrant workers waited at a bus stop in Srinagar, anxious to get out as quick as possible, as crowds gathered to protest, once again.

“It is a sign of what is to come,” said Tariq Hamid, a resident of Katrasoo. “Hardly any Indian civilian was killed before, but now, this is the new reality.”