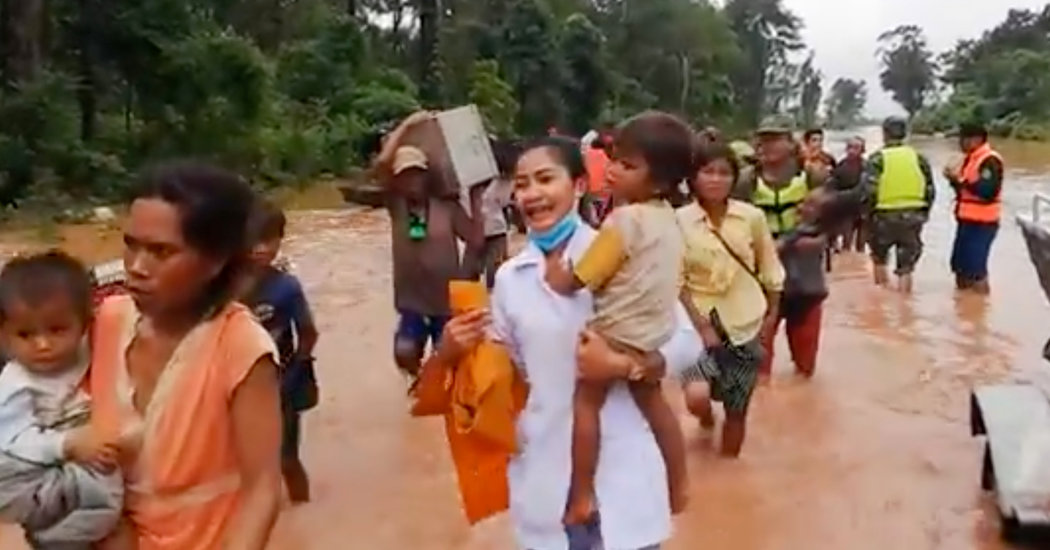 HONG KONG — Hundreds of people were missing on Tuesday after a billion-dollar hydropower dam that was under construction in Laos collapsed, killing several people and displacing more than 6,600 others, a state news agency said.

KPL, the official Lao news agency, reported that the Xe-Pian Xe-Namnoy hydropower dam collapsed at 8 p.m. on Monday, releasing five billion cubic meters of water and sweeping away homes in the southern province of Attapeu, which lies along the country’s border with Vietnam and Cambodia. The agency did not give an exact death toll.

Prime Minister Thongloun Sisoulith of Laos later suspended a planned government meeting and led members of his cabinet to monitor rescue and relief efforts around the collapsed dam, the agency reported on Tuesday.

Laos is a landlocked authoritarian state and one of the poorest countries in Asia.

The 410-megawatt dam was being built by the Xe-Pian Xe-Namnoy Power Company, a joint venture between a state-owned Laotian company and several other companies, the KPL agency said. Construction on the dam began in 2013, five years after the completion of a feasibility study, KPL reported.

The dam was expected to begin operating by 2019 and to generate approximately 1,879 gigawatt hours of electricity per year, the Xe-Pian Xe-Namnoy Power Company says on its website. Ninety percent of the electricity would be sold to neighboring Thailand, and the other 10 percent within Laos, the company says.

The phone lines of the company’s two offices in Laos on Tuesday were either busy or rang unanswered.

The Xe-Pian Xe-Namnoy dam that collapsed on Monday was designed to generate electricity from water that has been diverted from three rivers — the Houay Makchanh, the Xe-Namnoy and the Xe-Pian — in the southern Laotian province of Champasack. The Xe-Pian Xe-Namnoy Power Company says on its website that water from the project would be discharged into the Xe Kong River before it flows into the Mekong.

Hydropower dams are a major source of energy in Laos and elsewhere in Southeast Asia. But they are also controversial, in part because they often displace rural poor and cause severe impacts on fisheries and watersheds.

Last year, Radio Free Asia news service, funded by the United States government, reported that more than 100 families in three villages near the dam were facing forced eviction. R.F.A. quoted an unidentified resident as saying that villagers there did not want to move to the land the Laotian government had offered them as compensation, which they said was not suitable for farming.

In a 2013 letter to the Xe-Pian Xe-Namnoy Power Company, the advocacy group International Rivers said its staff had visited the resettlement zone for the dam and seen firsthand that people there were struggling “with a lack of access to sufficient food, water and land.”

“In addition, families have found that the shallow soil around their homes is inappropriate for growing vegetables, fruits or staple crops, and consistently attest to going hungry,” the letter said.

For years, one of the region’s most controversial hydropower projects was the Xayaburi dam, on the Mekong River in northern Laos.

Thailand is scheduled to buy nearly all of the Xayaburi dam’s electricity, and the Laotian government announced in 2012 that it would go ahead with the project, saying that it would generate billions of dollars in revenue.

But scientists have long worried that the Xayaburi dam would disturb spawning patterns and lead to the extinction of many species of fish, a main source of protein for millions of people along the Mekong. They also worry that it would embolden developers to proceed with other projects along the river, which flows from Laos into Cambodia and Vietnam.

The joint venture behind the dam that collapsed includes one company from Thailand — Ratchaburi Electricity Generating Holding — and two from South Korea: SK E&C and Korea Western Power Company.

SK E&C is an affiliate of SK Group, one of South Korea’s largest business conglomerates. SK E&C has built power plants at home and abroad. Officials with it and Ratchaburi Electricity Generating Holding could not immediately be reached for comment on Tuesday.

Korea Western Power Company runs a network of power plants in South Korea that burn coal, oil and liquid natural gas to generate power. It has also helped build and operate power plants in India, Indonesia and other countries. The company has said it is negotiating a contract to build and operate another hydroelectric power dam in Laos, besides the one that collapsed this week.

On Tuesday, a spokesman for Korea Western Power said by telephone that its role in the consortium behind the Laos dam was to operate and manage the power plant after it was completed. The spokesman, who declined to provide his name, said the company had not been involved in the construction and had no immediate comment on Monday’s accident.

How Laos Tries to Balance Its Powerful Neighbors