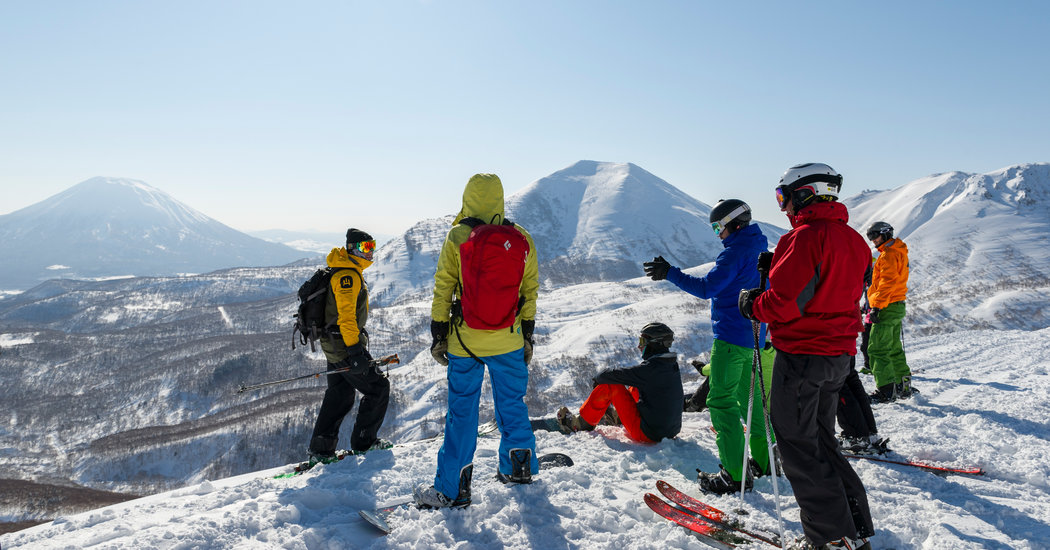 By any measure, Reiko Suzuki was leading a great life. She’d lived in the United States, had a solid job with a major Japanese company, a husband and two children, and she enjoyed downhill skiing with her family every winter. But then she became obsessed with a mountain.

Mount Yotei is a stunning volcano that is almost the mirror image of Mount Fuji. Like Roy Neary obsessing over Devils Tower in “Close Encounters of the Third Kind,” Ms. Suzuki formed an idée fixe around being near Yotei, which is in Hokkaido. She had wanted to live on Japan’s northernmost island since falling in love with horses as a girl: Her father had told her that only people who lived in Hokkaido could have horses.

Three years ago, she drove past a plot of land for sale in the ski resort of Niseko with a view of Yotei. She decided to buy it on the spot. She and her children have just moved into a sleek new home on the site, bought for 30 million yen, or $273,000; her husband divides his time between Yokohama, a city south of Tokyo, and Niseko.

“I felt a thunderbolt when I saw Yotei,” Ms. Suzuki, 45, said. “It was calling to me. There was a spiritual connection that gave me goose bumps.”

Nature lovers and downhill aficionados have long answered the siren call of Niseko’s mountains. With an average snowfall of 15 meters, or 49 feet per year, Mount Niseko Annupuri is synonymous with the deep, fluffy powder unrivaled in this part of the world.

In recent years, the area has become a magnet for international capital. Chalerm Yoovidhya, the Thai heir to the Red Bull drink empire, has commissioned a chalet designed by the Japanese architect Kengo Kuma, according to industry insiders. Chains like Ritz-Carlton, Hyatt and Hilton are planning or have already opened hotels.

Companies have sold assets to foreign interests, as in Citigroup’s sale of Niseko Village ski resort to YTL Corporation of Malaysia for some $67 million in 2010. Riding a surge in tourism to Japan, investors from Hong Kong, mainland China, Singapore and elsewhere in Asia are joining Japanese and Australian financiers in building Niseko into a major global winter resort.

“Japanese were overdeveloping sites and had no real strategy or vision for bringing the international ski market here,” said Paul Butkovich, director of real estate sales at Hokkaido Tracks, an asset management company. “Development opportunities are running dry in places like Bali and Vietnam. Our Asian clients are looking for strategic investments, and Japan is an undervalued asset.”

The Niseko boom is buoying Japan’s real estate market, which is showing signs of life after the 1991 collapse of a property bubble. Land prices in the town of Kutchan, adjacent to Niseko, posted the highest growth in Japan, at 58.8 percent in 2018 compared with a rise of 1.2 percent for Japan as a whole, according to the Nikkei newspaper.

Powderlife is packed with ads for condos on or near the slopes. More and more are by Asian developers from outside Japan, Mr. Lund said.

An example is the Singapore-based company SC Global Developments, which plans to erect a 190-unit complex called Setsu Niseko in Kutchan’s Hirafu, Niseko’s busiest ski area. Its apartments range from studios to 4-bedroom units and are priced from about $480,000 to over $3 million. The first phase to be completed, some 20 percent of the total, has sold out.

“I grew up skiing in Zermatt, Aspen and Whistler and I thought I knew snow,” said Simon Cheong, SC Global’s founder and chairman. “I remember the first time I skied in Hirafu I was overwhelmed by the powder snow.”

Ski enthusiasts have been drivers of Niseko’s development for decades. Theodor Edler von Lerch, an officer in the Austro-Hungarian Army, was the first person to ski in the area, shooting down the slopes of Mount Yotei in 1912 and helping to popularize skiing in Japan.

While the volcano is part of a national park and closed to development, the first ski lifts went up on Mount Niseko Annupuri in the 1960s. In the heady growth that followed, Niseko expanded into four ski areas, with additional runs in satellite resorts. Hotels, golf courses and rafting on the Shiribetsu river came soon afterward.

When the real estate bubble burst, some of those facilities were closed or abandoned; a few are in ruins. Around the turn of the century, though, Australians began gravitating to Niseko, drawn by its powder snow, undervalued property and, an advantage that Europe and North America could not offer them, the prospect of ski and snowboarding getaways without jet lag.

In 2003, Australian and Japanese developers built First Tracks, a four-unit condo complex by the Hirafu slopes that was the first of its kind. Minoru Okubo, a property consultant who was one of the developers, recalls locals saying it was a very risky move.

“Back then, it was mostly old pensions here, with Japanese skiers coming in package tour groups,” said Mr. Okubo, who was born in the local town of Niki. “We had never heard of the concept of a condominium.”

Mr. Okubo now advises customers who include a Singaporean businessman who flies to the nearby New Chitose Airport on one of his seven private jets. First Tracks is dwarfed by blocks of luxury apartments such as the Vale Niseko and AYA Niseko.

One of the biggest projects in the area, though, is on the other side of the mountain. On the slopes of the Hanazono ski resort is the $500 million Park Hyatt Niseko, with 100 hotel rooms and 114 condo units. It is scheduled to open this winter.

Now going for roughly $20,000 per square meter, about 100 of the condos have already been sold and, unusually by Niseko’s standards, half the buyers are Japanese. A 100-square-meter showroom suite features marble, leather and brass materials, as well as a walk-in closet and a private outdoor hot-spring bath with views of Yotei.

Hanazono has come a long way since Nihon Harmony Resorts, a company owned by the Australian entrepreneur Colin Hackworth, bought it in 2004 from the Japanese conglomerate Tokyu along with 148 acres that could be developed.

Pacific Century Premium Developments, founded by the Hong Kong investor Richard Li, acquired Nihon Harmony in 2007. Development of the resort was delayed by the 2011 earthquake and tsunami disaster in northern Japan, but the project is now approaching completion. Promoters envision Hanazono as a Hokkaido version of Colorado’s upscale Beaver Creek resort.

“Champagne powder snow is as unique as it is rare, and all snow-sports enthusiasts covet it like nothing else,” said Mr. Hackworth, representative director of Hanazono’s ski operations.

He added: “The Chinese government has mandated that by the 2022 Beijing Winter Olympics, China will move from 15 million snow sports participants to 300 million. As they mobilize, they will likely travel to the nearest place with great snow — Japan and hopefully Niseko.”

The influx of visitors will most likely explode when the railway operator JR Hokkaido extends its Shinkansen bullet train line to Kutchan around 2030, putting Niseko within easy reach of cities like Sapporo and Tokyo.

Niseko is a bright spot in rural Japan’s landscape of aging populations, shrinking work forces and abandoned buildings. But some locals want development to be restrained.

The mayor of Niseko, Kenya Katayama, said he welcomes luxury resorts planned by Aman and Ritz-Carlton, but he wants his community to develop along the lines of a Swiss village, instead of a huge North American-style resort.

“We want to protect our beautiful environment,” said Mr. Katayama, showing off a pool of endangered freshwater fish. “The keyword here is kyokan (empathy) for nature.”

As for Ms. Suzuki, one of Niseko’s newest residents, she said she hopes the town doesn’t become like Hirafu.

“I believe that freedom is in this nature, and not in commuting on Tokyo’s trains in the morning,” she said. “Having a foreign culture here is great because it makes Japanese be more open-minded. I want to be a bridge between Japan and the outside world.”