MEXICO CITY — The women and their children were taking a drive along a familiar rural road in northern Mexico when the gunmen attacked, riddling the three-car convoy with bullets.

One woman was shot at close range in the chest. One child was shot in the back. Several others — among them 6-month-old twins — were burned beyond recognition when one of the vehicles caught fire.

When the shooting stopped, six children and three women were dead, all members of the LeBarón family, dual Mexican and American citizens who have lived for decades in a fundamentalist Mormon community near the border.

“When you know there are babies tied in a car seat that are burning because of some twisted evil that’s in this world, it’s just hard to cope with that,” Kenny LeBarón, a cousin of the women who were killed, said in a telephone interview.

Many questions remained on Tuesday about what happened on that lonely stretch of road a day earlier, amid the rugged scrubland of the Mexican border state Sonora. 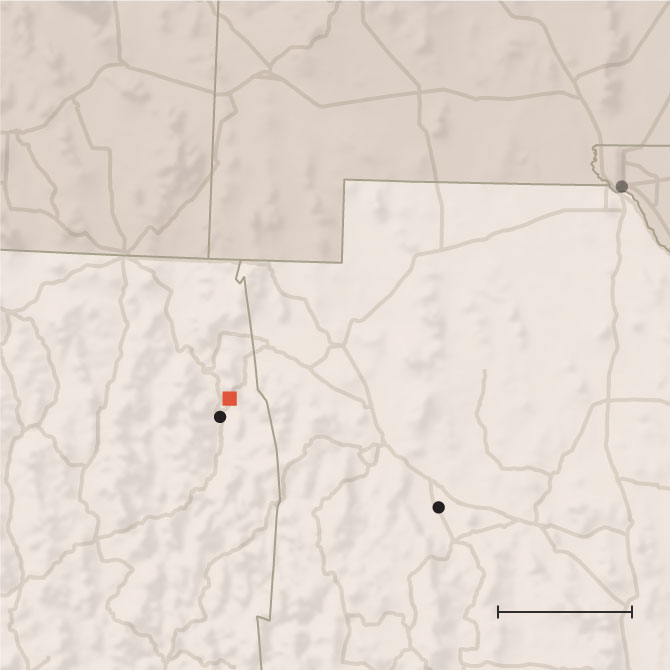 But coming closely on the heels of two other prominent episodes of violence, the ambush horrified a nation reeling from a record-high number of murders. And it added to the pressure on Mexico’s president, Andrés Manuel López Obrador, to fulfill the promise he made when he took office nearly a year ago: that he would curb the killings.

Mr. López Obrador seems to be struggling to fashion a coherent response.

In mid-October, at least 13 police officers were killed in the state of Michoacán in an ambush stemming from a struggle between rival criminal groups.

Days later, nearly 400 gunmen from the Sinaloa Cartel — the group once led by Joaquín Guzmán Loera, the imprisoned drug trafficker known as El Chapo — took control of Culiacán, the state capital of Sinaloa, after government forces tried to arrest one of Mr. Guzmán’s sons.

But Mexicans seemed especially taken aback by the sheer brutality of the latest spasm of bloodshed — children and their mothers slaughtered in broad daylight — and the government’s seeming inability to do much about any of the violence.

On Tuesday, Mr. López Obrador rejected rising criticism that his government is merely improvising against organized crime groups, and struck a defiant tone over his approach.

He vowed that there would be “intelligence, rather than force” and “punishment, not corruption.” Collusion between the authorities and criminals, he said, would end.

After taking office, Mr. López Obrador had vowed to end his predecessors’ so-called war on drugs and address the roots of crime by tackling poverty.

But on Tuesday, Carlos Bravo Regidor, a political analyst in Mexico City, said the recent violence had “exposed the limits and deficits of the president’s new vision for security.” He added, “The president can no longer continue with his discourse of ‘hugs, not bullets’ after what happened yesterday.”

President Trump offered via Twitter on Tuesday to help Mexico eradicate organized crime groups, saying that it was time “to wage WAR on the drug cartels and wipe them off the face of the earth.” The Mexican leader declined, however, saying that “in these cases we have to act with independence.”

Mr. López Obrador and his top security official said the authorities were still gathering information about the assailants in the latest atrocity.

They speculated that the family might have been victims of mistaken identity. Their sport utility vehicles “could have been confused by the criminal groups that are fighting in the region,” said Alfonso Durazo, Mexico’s security minister.

But details of the attack remained murky on Tuesday. In particular, it was unclear whether the attackers had intentionally targeted the family, which has in the past spoken out about the criminal groups that plague the northern border states of Sonora and Chihuahua.

The three cars were traveling Monday morning from La Mora, in the state of Sonora, to Colonia LeBarón in the state of Chihuahua, a four-hour drive partly along a dirt road through the mountains, relatives said. They knew the route well.

Julián LeBarón, a cousin of the three women driving the vehicles, said in a telephone interview from Bavispe, Mexico, that his cousin Rhonita Miller had been traveling to Phoenix to pick up her husband, who works in North Dakota and was returning to celebrate the couple’s anniversary.

Her car broke down, Mr. LeBarón said, and the gunmen “opened fire on Rhonita and torched her car.”

She was killed, along with an 11-year-old boy, a 9-year-old girl and the twins, he said.

The two other cars were attacked down the road, and the two other women killed, Mr. LeBarón said. A 4-year-old boy and a 6-year-old girl were also killed, he said.

One of the women, Christina Langford, 31, was shot outside her car, Mr. LeBarón said. “They shot her point blank in the chest,” he said.

Several family members posted a video, said to have been taken after the attack, showing a charred vehicle riddled with bullet holes, with a fire still burning inside.

Several children hid by the roadside to escape the attackers and were later rescued, family members said. One boy, who is about 12, hiked several miles to La Mora to alert family members about what had happened, said David Langford, a relative.

The boy’s younger sister, who is about 9, was injured and set out on her own. She became lost, and it took hours for the family to find her, said Mr. Langford, who grew up in Sonora and now lives in North Dakota.

The surviving children were taken to Arizona for treatment.

Among the victims was Mr. Langford’s sister, Ms. Langford, who grew up in La Mora, a small community of Mormon families surrounded by orchards and dairy cows, and had six children.

Ms. Langford was planning to move this week with her children to North Dakota to be closer to her husband, who had relocated there to work in the oil business. “She doesn’t like the city life, and she was trying to give them a better life, and sacrificing being with her husband to do it,” Mr. Langford said.

Mr. LeBarón said the family had not received any threats, other than general warnings not to travel to Chihuahua, where they typically went to buy groceries and fuel.

Christina Langford, who died in the attack, in a photograph provided by her family.Credit…

Mr. Langford said relatives had been warned by criminal groups to “stay off” the road between La Mora and LeBarón at night, a command they had complied with. “We’ve been traveling that road for 50 years,” he said.

“We need the Mexican people to say at some point, ‘We’ve had enough,” he said. “We need accountability — we don’t have that on any level.”

Mormon families have lived in northern Mexico for decades. Unaffiliated with the mainstream Church of Jesus Christ of Latter-day Saints, some practice plural marriage, while others are monogamous.

The communities make a living on both sides of the border, with many of their members speaking English and holding dual citizenship. In Mexico, they raise cattle and farm alfalfa and chili peppers. The men also travel to the United States to work in different parts of the country.

Over the years, there have been tensions between the Mormons and local criminals. In 2009, two members of the LeBarón family were murdered after organizing local communities against the gangs.

But the Mormons have learned to live with the occasional threat, said Lynn Wariner LeBaron, a part-time resident of the community of Colonia LeBarón. And Ruth Wariner, who grew up in the region, said that in recent years, the Colonia LeBarón community seemed to have established a truce of sorts with the gangs.

So the killings, Ms Wariner said, were a surprise. There just didn’t seem to be any reason for them.

“Things seemed to be getting more peaceful,” she said.