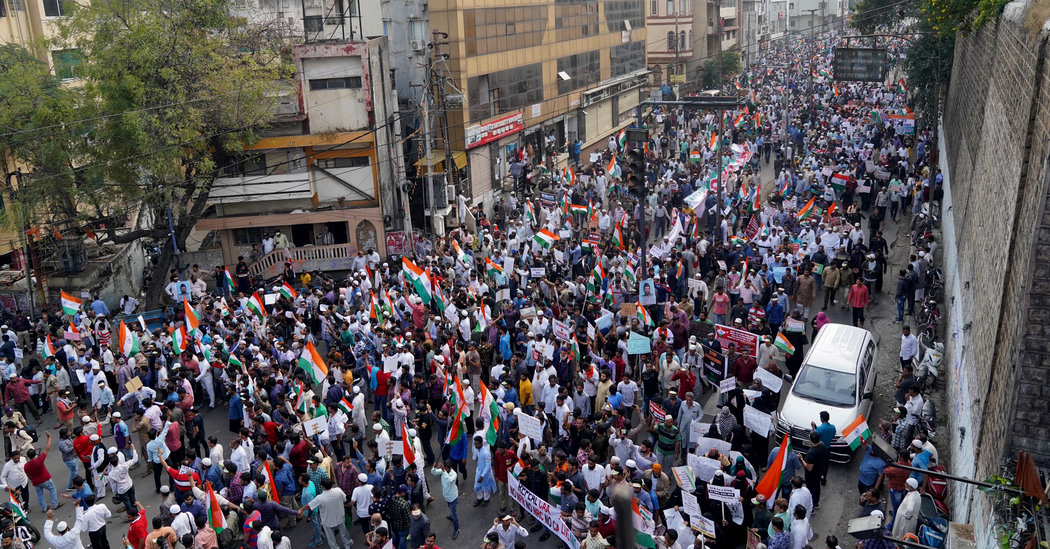 HYDERABAD, India — At least 100,000 people gathered Saturday in Hyderabad, India’s technology hub, to protest Prime Minister Narendra Modi and a new law they say will strip the country of its secular foundations, maintaining steady pressure on the government as demonstrations entered their fourth week.

The protests have drawn massive crowds across India, with more than 200,000 people gathering in Kochi city, in the southern state of Kerala, on New Year’s Day. And in Delhi, hundreds continued to camp out on a vital stretch of highway that links the capital to its suburbs, bristling against one of the city’s coldest winters in decades.

While the protests are the biggest threat yet to Mr. Modi’s tenure in office, they may also be the beginning of a deeper political and social shift in India. From the start the protests have attracted Indians across political stripes and creeds. But with India’s Muslims spearheading the demonstrations this past week, the 200-million strong minority showed it can organize as a formidable force to check Mr. Modi’s Hindu nationalist government.

The protests began in December when the government passed a law that uses religion as a criterion for determining whether illegal migrants in India can be fast-tracked for citizenship. The measure favors members of all South Asia’s major religions except Islam, India’s second largest faith. Muslims worry that the law will be coupled with a citizenship test and used to strip them of their Indian nationality.

Mr. Modi’s government has said that the measure is misunderstood and aims only to help religious minorities that are persecuted in Bangladesh, Afghanistan and Pakistan.

Although the government has promised that Indian citizens, regardless of their religion, will not be affected by the measure, Muslim and secular Indians remain wary. Many worry that Mr. Modi’s Bharatiya Janata Party, or B.J.P., plans to disenfranchise Muslims in its quest to remake India as a homeland for Hindus, who make up about 80 percent of the population.

On Friday, the government dug in its heels, with Home Minister Amit Shah vowing at a rally in Jodhpur that “we won’t backtrack even an inch” on the divisive law, which he masterminded and which has yet to be enacted.

The governing party, Bharatiya Janata Party, was initially taken aback by the protests, but has recently mobilized its supporters in its own large rallies to express support for the citizenship law. The rally in Jodhpur was the first in that planned government counteroffensive, with other senior leaders preparing to fan out across India to marshal loyalists.

In Hyderabad on Saturday, protesters came out in large numbers despite police restrictions capping the gatherings at 1,000 participants. Organizers said the demonstrations drew 200,000 people, while the local authorities pegged the number at 100,000. The city’s Muslim community organized the protests, and volunteers handed out water and Indian flags.

That Muslims continue to organize protests that turn out such large numbers nearly a month after demonstrations first began is remarkable, considering the fragmented nature of the community, among the nation’s poorest and most illiterate, and its limited political power. Indian Muslims hold slightly less than 5 percent of parliamentary seats, despite making up 14 percent of the population.

On Saturday, some protesters held placards reading, “I am an Indian by choice, not by chance,” a reference to the millions of Muslims who chose to stay in a secular India during the country’s bloody 1947 partition, when Pakistan was carved out of the subcontinent as a homeland for Muslims.

Since India gained its independence from Britain, the country’s Muslims have never protested in such large numbers, said Farhan Nasir, 27, a doctor who attended the protest in Hyderabad, and is Muslim. “If you will break us, we will unite. For the first time, Muslims are protesting on the street in large numbers.”

Dr. Nasir said Muslims felt compelled to address the governing party’s divisive politics and sectarianism. He added that the community historically had been so focused on making ends meet that it was unorganized politically and socially. But that is changing, he said, as they feel increasingly threatened by Mr. Modi’s government.

“This could be the beginning of a new politics for Muslims and for India as well,” he said. “This will not fizzle out; the protest is in a secular direction.”

Some protesters expressed impatience with Mr. Modi’s sectarian politics, pointing to inflammatory statements he and other party leaders made ahead of national elections last year even as the country faced a weakening economy and unemployment at a 45-year high.

“Elections should be fought on the issues of economy, employment, inflation and not on religion issues,” said Syed Salman Ahmad, 27, a civil engineer.

The atmosphere at Hyderabad’s demonstration was festive, with hawkers selling lemonade and snacks, protesters sporting painted Indian flags on their cheeks and groups of women banding together in song until the sun set.