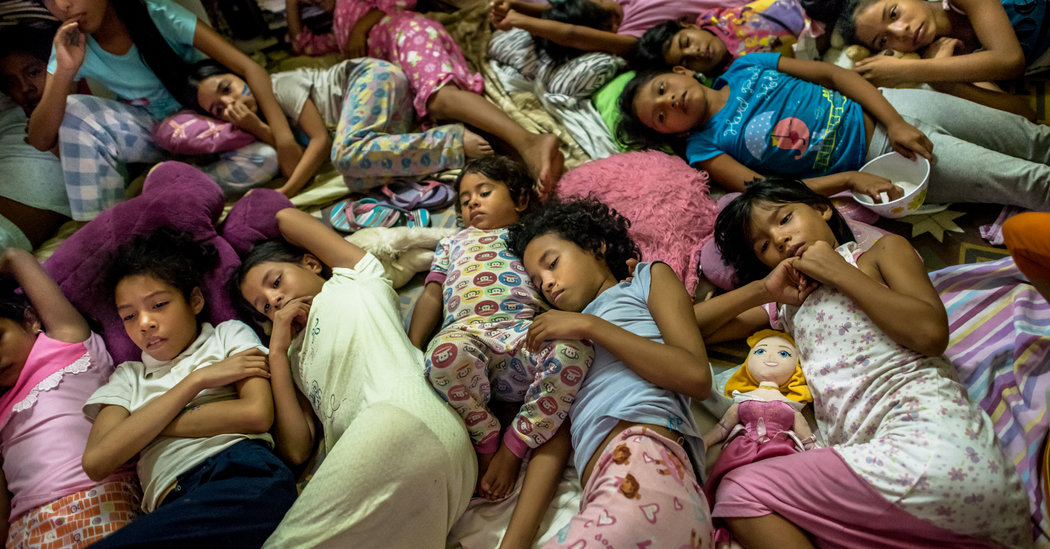 MARACAIBO, Venezuela — In their final minutes together, Jean Carlos, 8, held his mother’s hand like an anchor and promised to “take deep breaths” so he wouldn’t cry. His sister, Crisol, 10, hid angrily in the kitchen. His brother, Cristian, 12, hauled a blue suitcase into the yard.

Past the family gate, Aura Fernández, 38, a single mother of 10, beat back a surge of tears. Her bus came rolling down the road. Then she kissed her children, climbed aboard and disappeared.

“I love you,” she said just before setting out. “Study hard.”

Seven years into an economic collapse, Venezuela’s migrant crisis has grown into one of the largest in the world. Millions have already left. By the end of 2020, an estimated 6.5 million people will have fled, according to the United Nations refugee agency — a number rarely, if ever, seen outside of war.

But hidden inside that data is a startling phenomenon. Venezuela’s mothers and fathers, determined to find work, food and medicine, are leaving hundreds of thousands of children in the care of grandparents, aunts, uncles and even siblings who have barely passed puberty themselves.

Many parents do not want to put their children through the grueling and sometimes very dangerous upheaval of displacement. Others simply cannot afford to take them along.

The exodus is so large that it is reshaping the very concept of childhood in Venezuela, sending grade-schoolers into the streets to work — and leaving many exposed to the swirl of abusive players who have filled the vacuum left by the collapsing Venezuelan state, including sex traffickers and armed groups.

By one assessment, conducted by the Caracas-based aid organization Cecodap and the polling firm Datanálisis, migrating parents have left behind nearly a million children.

“You grow up fast,” said Ms. Fernández’s niece, Silvany, a 9-year-old with long hair and a husky voice. Her mother went to work in Colombia in October.

Since then, Silvany and her cousins have remained with her ailing grandparents. And the fourth grader has assumed many of the responsibilities for her little brother, Samuel, age 1, feeding him and cradling him at night.

In rare situations, children have been passed from grandparent to cousin to neighbor, with each caretaker migrating or disappearing, until young people finally have found themselves alone.

“This is a phenomenon that is going to change the face of our society,” said Abel Saraiba, a psychologist at Cecodap, which provides counseling to Venezuelan children. These separations, he added, have the potential to weaken the very generation that is supposed to one day rebuild a battered Venezuela.

The departures are overwhelming community organizations, many of which have seen their donors — middle and upper class families — flee the country just as they need them most.

The arrival of the new coronavirus in Venezuela has isolated these children further. To combat the spread, President Nicolás Maduro has announced a countrywide lockdown, sending the military into the streets to enforce the measures.

The effort has cut many young people off from the teachers and neighbors who may be their only means of support. At the same time, borders are now closed, severing these children from the rest of the world and making it impossible for their parents to return, or to come and retrieve them.

Here in the state of Zulia, where Ms. Fernández left her children in January, the economic collapse is particularly stark. It was once the Texas of Venezuela: rich in oil and cattle, proud of its distinctly regional culture and home to a flourishing class of petroleum workers who bought nice cars and took expensive vacations.

Today, it is home to rolling blackouts, and jobs with monthly wages that barely buy two days’ worth of rice.

The day she left, Ms. Fernández wore an orange dress and carried a pink purse crocheted by her oldest daughter, packed with little more than her Bible, a toothbrush and a bottle of perfume.

Behind her she hauled the empty blue suitcase that she planned to pack with goods to bring home to her children.

As her bus bumped out of the neighborhood, she passed shuttered homes and once bustling shops, now plastered with “for sale” signs.

At a taxi station, she boarded a battered Ford Bronco and said a final goodbye to her son Erasmo, 19, who had accompanied her to the station. Then she sped out of town, past a welcome sign that read “Zulia, a shining destination.”

Already the distance from her children was ripping at her insides. “Are they OK?” she asked at one point. “Are they sick? Are they eating?”

For hours the car rattled down the highway, skirting the gulf. Then the driver dropped her in an often dangerous border town, where she hopped on a motorbike taxi, hugging the suitcase to her chest and throwing her face into the sun.

“I did not abandon my children,” she said during one stop, after the Bronco had popped a tire. “I left them because the situation is very difficult in Venezuela.”

It was evening by the time she marched across the border, marked by a towering archway and a chaotic crush of people. Then she took another motorbike and another bus before arriving, around dawn, at her destination.

Ms. Fernández had no telephone and it was unclear when she would see her children again.

In Venezuela, Ms. Fernández had managed cleaning supplies at a food company but found that she couldn’t survive on the meager salary. She left for Colombia for the first time in late 2016, placing her children in the care of her mother, Mariana Uriana, now 55, and father, Luis Fernández, 77. Both of them have health problems that make it difficult for them to get out of bed some days.

At the time, the country’s recession had already become a crisis, and the Fernández children were eating only once a day. They had no money for soap to wash their clothes, so they had stopped going to school.

Their fathers had long disappeared.

In Colombia, Ms. Fernández found a job as a housekeeper in the city of Barranquilla, and she began to send money home every two weeks, about $35 a month.

The children bought soap and returned to their classrooms.

But when Ms. Fernández came back in December, for Christmas, it was clear that not much else had changed. Her sister, Ingrid, the mother of Silvany, had joined her in Barranquilla, leaving the grandparents in charge of 13 young people, with the help of a sometimes present group of aunts and uncles.

And Ms. Fernández’s children were still eating only once a day. So she set off again.

It is a boarding school for girls in need, run by cheery nuns who swish down its sunny hallways in long black habits. In the past, students came here after parents died or began to use drugs. Today, at least half of its residents have a parent abroad.

The girls share a peach-colored bedroom, a kitchen, a chapel, a small mess hall and patio with a basketball court and a stage.

The school has seen better times. It has running water for a short period about every two weeks, and the girls shower, cook and flush the toilet using water they save in any containers they can find. They have no light bulbs for one of their two bathrooms, which means they brush their teeth on slippery floors in the dark.

But her biggest concern is providing a degree of normalcy for her charges, keeping them busy with homework assignments and the occasional movie night so that they don’t have time to think about anything else.

“Say no to depression,” reads one of the signs on the patio. Last year, one of the students locked herself in the bathroom and threatened suicide after her parents left the country.

One day last month, the girls woke just after dawn, brushed their hair and headed to the chapel, where a priest led them in passionate prayer, accompanied by a nun on a guitar.

The girls spoke to God out loud, in rounds.

“For the women!” they went on.

“For those who are out of the country!”

Later, on the patio the girls played Cinderella and danced to pop songs. Then a spat broke out between a petite 7-year-old whose mother had left on Christmas Eve, and Ana, 10, whose black curls shook as she spoke.

“Your mom abandoned you,” taunted Ana.

“My mom did not abandon me!” the younger girl yelled.

Ana later felt bad. As one of the older students, she sometimes climbs into bed at night with the littler ones, comforting them as they cry.

“There was no food in my house,” they tell her.

“We are living in a time of crisis,” Ana said.

“No one” explained the country’s collapse to her, she said. “I realized it on my own.”

The day after Ms. Fernández left, her son Jean Carlos brought his well-worn notebook to class. Several of her children had been remarkable students, she said, particularly Jean Carlos, an aspiring doctor who began to read around age 3.

Since she left, though, some of them have regressed significantly, especially Crisol, who had learned and then suddenly forgotten her multiplication tables.

At school, Jean Carlos stared at the sentence on the board, which the students were supposed to copy until they had filled a page in their books.

“The table belongs to mom,” the sentence said.

“The table belongs to mom,” he wrote.

“The table belongs to —,” he wrote next.

“The table belongs to —,” he tried again, then again.

He couldn’t go on.