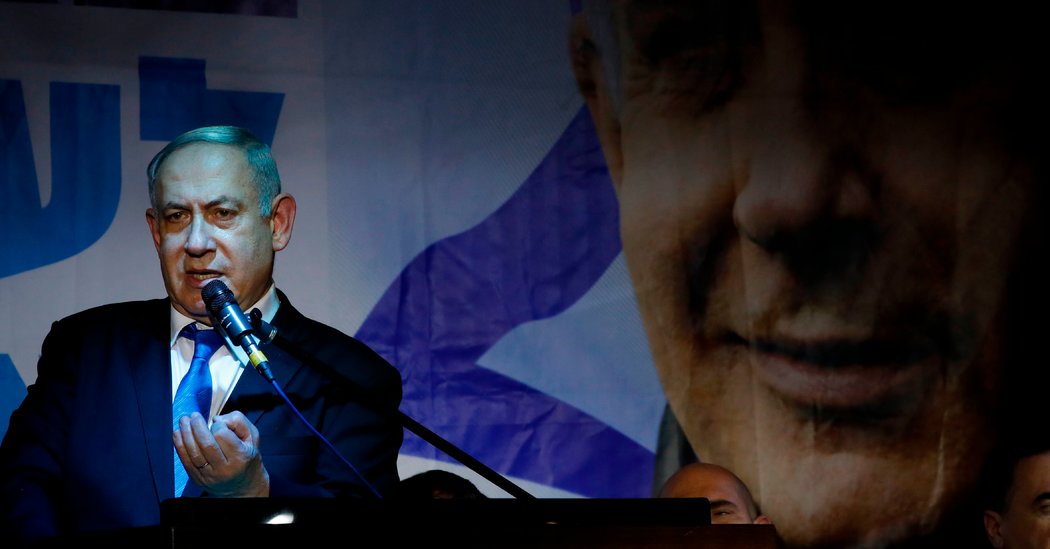 JERUSALEM — Prime Minister Benjamin Netanyahu of Israel easily brushed off a challenge for the leadership of the conservative Likud party early Friday, a crucial victory for Israel’s longest-serving leader but one that may only harden the country’s yearlong political standoff.

For Mr. Netanyahu, the landslide in a party primary on Thursday reaffirmed his political prowess and staying power despite his indictment last month on corruption charges, and it gives a jolt of fresh energy to his campaign for Israel’s next general election in March.

But it also assures that one of Israel’s most polarizing issues will be on the ballot in that election: Mr. Netanyahu himself.

Israel has already had two inconclusive elections this year, each ending in deadlock with voters nearly evenly divided on whether the corruption cases against Mr. Netanyahu should disqualify him from serving a fourth consecutive term.

And though support for Mr. Netanyahu has been slipping since his indictment, recent polls suggest that a third election may not resolve anything. Once again, neither Mr. Netanyahu nor his main opponent, Benny Gantz of the centrist Blue and White party, may have the votes to form a majority government.

In the party primary on Thursday, the most serious internal leadership challenge Mr. Netanyahu had faced in years, he handily beat a rival party veteran, Gideon Saar, by a vote of 72 percent to 28 percent, according to official results.

“A giant victory!” Mr. Netanyahu declared on Twitter just after midnight, barely more than an hour after the polls closed. “With the help of God and with your help, I will lead Likud to a great victory in the upcoming elections and we will continue to lead the country to unprecedented achievements,” he added.

Mr. Saar congratulated Mr. Netanyahu and conceded defeat in a televised statement an hour later. He said he and his colleagues would stand behind Mr. Netanyahu in the party’s campaign for the general election.

“I am content with my decision to have run” in the primary, Mr. Saar said, adding, “Those who are unwilling to take a risk for what they believe in will never succeed.”

But the fact that there even was a battle exposed cracks in Likud’s long-united front as it prepares for an eventual post-Netanyahu era.

Despite fears of a low turnout because of stormy weather and the Hanukkah holiday, about half the 116,000 paying Likud members came out to vote, a fairly typical number for Likud party primaries.

Though those eligible to vote in the Likud leadership primary were only a small fraction of those who vote for the party in general elections, Thursday’s contest may serve to allay broader concerns ahead of the March election that Israelis are suffering from voter fatigue and may give up on the democratic process.

Mr. Saar, a hawkish ideologue and technocrat, had argued that only he could return Likud and its right-wing allies to power and that Mr. Netanyahu was “blocked” after failing to form a government after the two previous elections, in April and September.

In those elections, neither Mr. Netanyahu nor Mr. Gantz was able to muster a majority to build a viable coalition.

Mr. Netanyahu and Mr. Gantz both professed interest in joining forces in a unity government, which polls showed most Israelis wanted, but Mr. Gantz said he would refuse to serve in a government with a prime minister who is under indictment, and Mr. Netanyahu insisted that under any agreement to rotate the prime minister’s job, he must serve first.

Mr. Netanyahu had little incentive to yield on that demand. He remains prime minister until a new government is formed, and retaining the job leaves him in better position to fight his legal battle.

He could, for instance, try to negotiate a plea deal with law enforcement authorities in which the charges are dropped in return for his departure from public life. A sweeping victory in the next election could even get him enough support to grant him parliamentary immunity from prosecution.

Mr. Netanyahu is accused of trading official favors worth hundreds of millions of dollars to Israeli media moguls for lavish gifts and positive news coverage. He has denied any wrongdoing, casting himself as the victim of a witch hunt by a left-wing elite that he says dominates the news media and has pressured the law enforcement authorities to pursue criminal investigations against him.

Fighting for his political survival, Mr. Netanyahu left nothing to chance in the Likud primary contest. He attended campaign rallies in up to five different towns a night and appealed to voters in Facebook Live videos, re-establishing his popularity within the Likud and firing up the party’s rank and file ahead of the more fateful contest against Mr. Gantz.

Mr. Netanyahu, 70, has brought Likud to power four times and has led the party for the past 14 years, and for a total of 20 years in all. Known to all as “Bibi,” he has inspired a cultlike devotion, with supporters at his rallies chanting “Bibi, King of Israel.”

At age 53, Mr. Saar is one of the next generation of Likud leaders vying to succeed Mr. Netanyahu. He, too, pulled out all the stops in his bid to lead the party, even pledging to work to secure a new job for Mr. Netanyahu as the president of Israel. That post, high profile but mostly ceremonial, is meant to be apolitical and unifying.

Other would-be Netanyahu successors have preferred to wait in the wings, saying they would seek the Likud leadership only once the Netanyahu era is over. Likudniks pride themselves on their fierce loyalty to their leader and challenging Mr. Netanyahu risks being cast into the political wilderness, the fate of some other former Likud ministers who bucked his control. The party has only had four leaders since its formation and rise to power in the 1970s, and has never unseated an incumbent.

It remains to be seen whether Mr. Saar’s bid for the job will position him as a front-runner in the post-Netanyahu era, or if he will pay for his perceived disloyalty in challenging Mr. Netanyahu in a time of trouble.

Mr. Netanyahu’s political and legal path forward remains far from clear, even with the Likud battle over. A clear election victory in March could keep him in office and give him a chance of seeking parliamentary immunity from prosecution, but nothing is guaranteed.

Israel’s Supreme Court will hold a hearing on Tuesday in response to a petition requesting a ruling on whether a candidate charged with serious crimes may be asked to form a new government.

Under current Israeli law, a prime minister under indictment can continue to serve until a final conviction. But the law does not address what to do in the case of a candidate for prime minister who has been charged.

The judicial authorities have so far tried to avoid ruling on the matter, hoping it would be decided in the public and political realm, through elections.

So far, though, as Thursday’s contest showed, the charismatic Mr. Netanyahu still commands a strong and emotional following.

Ben Caspit, a political columnist, wrote in the Maariv newspaper on Thursday that the Likud voters’ choice between Mr. Saar and Mr. Netanyahu was one “between the head and gut; between cold logic and the warm heart.”