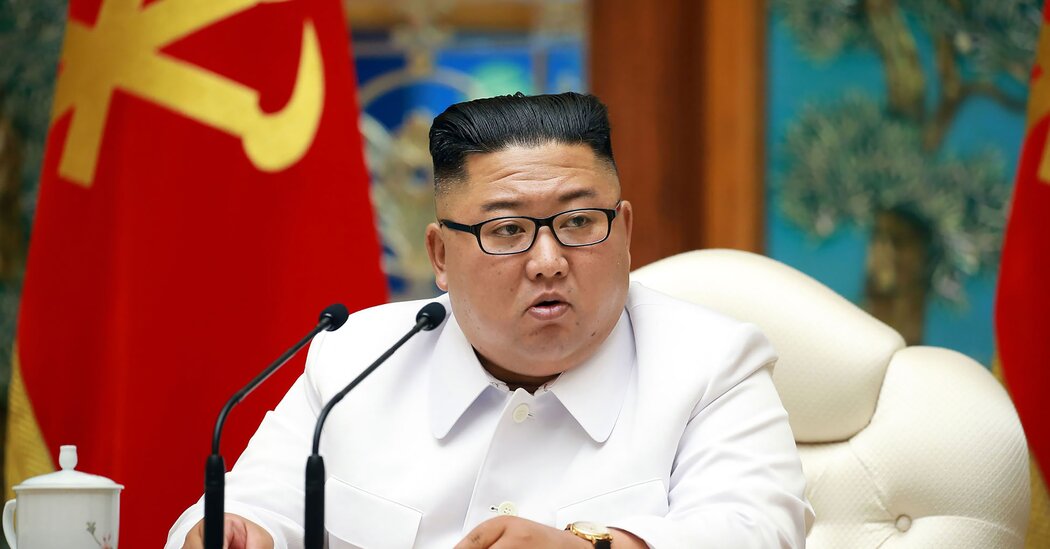 SEOUL, South Korea — North Korea said on Sunday that it had locked down a city near its border with South Korea and declared a “maximum” national emergency after finding what its leader, Kim Jong-un, said could be the country’s first case of Covid-19 there.

It issued the high alert after a North Korean who had defected to South Korea three years ago but secretly crossed back into the North’s Kaesong City last Sunday was “suspected to have been infected with the vicious virus,” the North’s official Korean Central News Agency said on Sunday.

After running several tests, the health authorities put the person and contacts under quarantine, as well as those who have been in Kaesong City in the last five days, the North Korean news agency said.

While reporting the incident, the agency stopped short of calling it the country’s first case of the coronavirus, saying the test result was “uncertain.”

But it was serious enough that Mr. Kim called an emergency meeting of the ruling Workers’ Party’s Political Bureau on Saturday, where he admitted that his country may have its first outbreak of Covid-19.

“There happened a critical situation in which the vicious virus could be said to have entered the country,” Mr. Kim was quoted as saying, while declaring “a state of emergency” around Kaesong City and ordering his country to shift to “the maximum emergency system and issue a top-class alert.”

Mr. Kim “took the pre-emptive measure of ​​totally blocking Kaesong City and isolating each district and region from the other” on Friday shortly after he received a report on the situation, the North Korean news agency said.

Until now North Korea, one of the world’s most isolated countries, has repeatedly said that it has no case of Covid-19, although outside experts questioned the claim.

A Covid-19 outbreak could seriously test North Korea’s underequipped public health system and its economy, already struggling under international sanctions. International relief agencies have been providing test kits and other assistance to help the country fight any potential spread of Covid-19.

North Korea has taken some of the most drastic actions of any country against the virus, and did so sooner than most other nations.

It sealed its borders in late January, shutting off business with neighboring China, which accounts for nine-tenths of its external trade. It clamped down on the smugglers who keep its thriving unofficial markets functioning. It quarantined all diplomats in Pyongyang for a month.

​The government’s ability to control the movement of people​ also bolsters its disease-control efforts.

But decades of isolation and international sanctions have raised concerns that ​it lacks the medical supplies to fight an outbreak, which many fear has already occurred.

​North Korea’s senior disease-control officials attended the Political Bureau meeting Mr. Kim called on Saturday, while other senior government and party officials from across the country watched it through video conferencing, state media reported. Mr. Kim ordered them to fight the spread of the virus “​with a sense of boundless responsibility, loyalty and devotion.”

The North said it was investigating a military unit for failing to catch the runaway when the person first slipped through the inter-Korean border to defect to the South three years ago, and said it planned to “administer a severe punishment and take necessary measures.” The defector returned home last Sunday after illegally crossing back, it said.

More than 30,000 North Koreans have fled to South Korea since the early 1990s. But some have failed to adapt to life in the capitalist South Korea and fled back to the North. Still, defections across the inter-Korean border, one of the world’s most heavily armed, are rare.