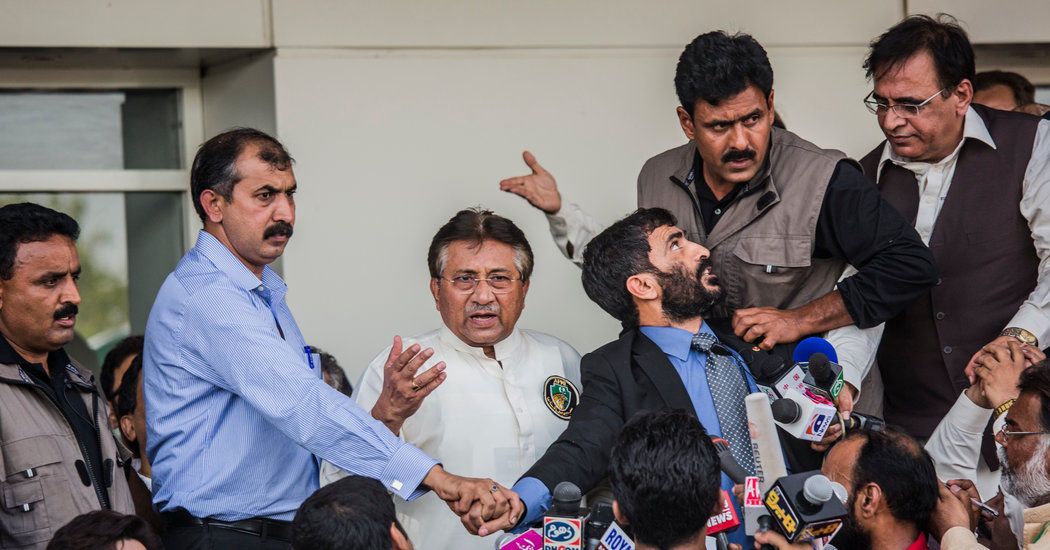 ISLAMABAD, Pakistan — After years of delays and disruptions, a special court in Pakistan on Tuesday sentenced the country’s former military dictator, Pervez Musharraf, to death in a treason case.

But the sentence is more symbolic in nature, as Mr. Musharraf is currently in self-imposed exile in Dubai and is unlikely to return to the country. Nevertheless, the sentence marked the first time in the country’s history that a military dictator has been held accountable for his actions while in power.

A three-member special court panel announced that Mr. Musharraf “has been found guilty of Article 6 for violation of the Constitution of Pakistan,” namely, high treason and subverting the Constitution. Two judges decided in favor of the guilty verdict while one disagreed.

Mr. Musharraf, 76, was accused of subverting the country’s Constitution in 2007 when he imposed a state of emergency in the country in an attempt to thwart a political opposition movement and also fired much of the judiciary. The movement had greatly weakened Mr. Musharraf, and he resigned in 2008 under a threat of impeachment.

The treason case was initiated in 2013 by the government of Nawaz Sharif, a former prime minister who has a history of animosity toward the former military ruler. Mr. Musharraf toppled Mr. Sharif’s government in 1999 in a bloodless coup and ruled until 2008.

But as Mr. Musharraf’s fortunes tumbled, Mr. Sharif’s rose; he managed to make a political comeback and returned to power in 2013. Within months, his government announced that it was initiating a treason case against the former military dictator.

Mr. Musharraf has denied the charges and insisted that the case against him was a political vendetta.

The treason case was groundbreaking in many ways. None of the country’s military dictators had ever before been held accountable for their actions. And Mr. Sharif sought to use the treason case to assert civilian supremacy over the military, a powerful institution in Pakistan.

The country’s military, however, balked at the move. Mr. Musharraf did not appear in the initial proceedings of the treason case, and before one hearing, in 2014, his security convoy was suddenly and mysteriously directed to a military hospital. Mr. Musharraf was then hospitalized as he complained of chest pains, but it was widely believed that the military was protecting its former chief from prosecution.

In 2016, Mr. Musharraf was allowed to leave the country for medical treatment. He said he would return and face the legal cases, but he failed to do so.

Earlier this month, Mr. Musharraf released a video message from a hospital in Dubai where he was undergoing medical treatment and complained of being treated unjustly.

“I have served Pakistan all my life and I am being tried for treason,” a frail and weak looking Mr. Musharraf said.

Mr. Musharraf once enjoyed broad support both in Pakistan and abroad, and was considered an important ally of the United States in its effort to root out terrorism after the Sept. 11, 2001, terror attacks. But his popularity dropped sharply in 2007 as he tried to maintain his grip on power and clashed with the country’s judiciary and political opposition.