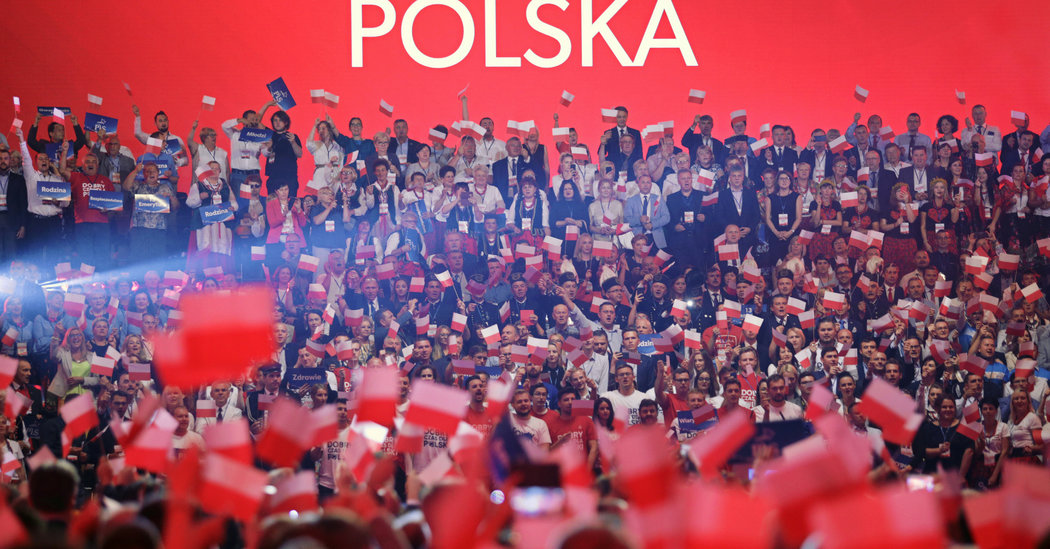 They displayed a photograph of Ms. Thunberg standing with George Soros, the billionaire investor and progressive political donor. They said it is evidence she belongs to a supposed global cabal that opposes the nationalist ruling party in Poland, Law and Justice, and populists around the world.

But the photo was a fake. Spread widely online by far-right extremists, it combined the head of Mr. Soros with the body of Al Gore, the former vice president of the United States.

It was just one example of how much the state media has been turned into the mouthpiece of Poland’s government, raising concerns about how fair the country’s elections on Sunday can be and eliciting objections from European Union officials worried about media freedom.

As the vote approaches, the Law and Justice party wields state media as its most powerful campaign tool. The very influential state television station, TVP, has proved itself more valuable to the party than any billboard or election advertising campaign.

TVP has pushed forward a steady stream of fawning stories about the ruling party. It constantly reminds voters of how much money the government is spending on social programs. It warns that a vote for the opposition would lead to financial ruin for Poland.

Poland’s media has always been polarized and previous governments have sought influence over state-controlled broadcasters, but never in such sweeping and systemic fashion as the Law and Justice Party has.

During its four years in power, Law and Justice has reshaped the media landscape, imposing complete governmental control over TVP and cracking down on independent media.

The government says that it’s trying to correct an imbalance in political perspectives in the media. But in the Polish countryside, surveys estimate that some 50 percent of residents get their news solely from the national broadcaster.

The country’s ranking in the annual World Press Freedom Index published by Reporters Without Borders has fallen every year since Law and Justice has been in power, from 18th in 2015 to 59th in the most recent survey.

And opponents worry that press freedom would be restricted even more if the party wins a substantial victory on Sunday.

“TVP is an extension of the political campaign staff,” said Jan Grabiec, spokesman of Civic Platform, the biggest opposition party. “This has made the campaign unfair. Fortunately we still have private media that provide some counterbalance. But for how long?”

Party leaders have suggested limiting foreign ownership of media, including by other European Union members, which could silence some of the country’s most critical and influential media outlets.

And the party’s manifesto includes calls for a “self-regulatory body” for journalists that media watchdogs fear could become a censor.

In the TVP universe, Germany and France are treated with suspicion if not outright hostility. President Trump is the greatest American president in generations and his love for Poland goes hand in hand with his affection for Law and Justice.

Migrants are overrunning much of Europe, forcing families from Hamburg to Marseilles to huddle in their homes at night in fear of being raped or assaulted. And when the migrant issue started to fade as a public concern, TVP started broadcasting frightening stories about a new threat — the rainbow plague of homosexuality.

On Thursday night, three days before the election, the station broadcast what it described as a documentary: Inwazja or Invasion, billed as an exposé of the true and insidious agenda of the LGBT movement, which the station says is to tear down traditional families.

After the liberal Gdansk mayor, Pawel Adamowicz, was stabbed to death while onstage at a charity concert in January, his family and leading opposition figures said the murder was fueled by state television.

According to Gdansk officials, public media dedicated almost 1,800 negative news items to Mr. Adamowicz in 2018, portraying him as a corrupt politician who would let Islamic terrorists into Poland.

The Polish press remains more vibrant than in neighboring Hungary, where the government has near complete control over the media, but pressure on independent journalists continues to grow.

Investigative journalists have reported being spied on and harassed. At the same time, government policies have put increasing financial pressure on independent and critical news organizations.

A top target is Gazeta Wyborcza, which was founded in 1989 as part of the Polish Round Table Agreement between the Communist government and the Solidarity movement, and is the country’s most influential daily newspaper.

Bartosz Wielinski, the paper’s foreign editor, said that the government has applied pressure in a number of ways, including cutting off advertising from state controlled businesses.

It has created a climate where those who want to do business with the state think twice about advertising with the newspaper, he said.

The newspaper became an enemy of Law and Justice in 2018, when it published a series of stories that revealed corruption at the Financial Supervision Authority, forcing its chairman Marek Chrzanowski, to resign.

The party and other state bodies have since filed some 50 legal challenges against the newspaper and the lead reporter, Wojciech Czuchnowski.

Mr. Wielinski sent The New York Times a list of dozens of other lawsuits the paper is currently fighting. The state filed them to intimidate the paper, he said.

“You cannot call yourself democratic and European if you target the free press,” he said. “The government is conducting a kind of information warfare and trying to hide everything that is uncomfortable for them.”

The other major media outlet that has come under criticism of the government is TVN, a private television station that is owned by Discovery, Inc., an American media company. Its news channel TVN24 is routinely accused by the government of spreading “fake news.”

Last year, after the station broadcast stories about the rise of far-right extremist groups in the country, the station and its journalists came under fierce attack by the government.

“It is astonishing that these public figures would attack journalists who were fulfilling the functions of an independent media in Poland’s vibrant democracy,” Ms. Mosbacher wrote.

The government had been considering plans to “re-Polonize” the media, allowing it to take control of TVN, and only backed down after public outcry and diplomatic pressure.

But party leaders have not abandoned the idea.

“A self-respecting nation and a self-respecting people cannot allow most of its media to be in foreign hands, and this is a task our government will face if we remain in power in the next term,” Jaroslaw Gowin, the minister of higher education, said in June.

Prime Minister Morawiecki, during an interview this summer, defended his party’s practices using an argument that would sound familiar to any consumer of right-wing media.

He said the media landscape is dominated by a liberal elite and, even now, remains unbalanced.

“I can say 80-20, 80 percent is your side, 20 percent is our side,” he said. “TVN are, well, people laugh sometimes when they see it, it reminds me of the propaganda of the Communist times.”

The head of TVP, Jacek Kurski, who declined repeated requests for interviews, has defended the political bias of the station, saying that the other news channels were also not objective.

Law and Justice, known in Poland as PiS, took control of state broadcasters soon after coming to power in 2015, a first step in reshaping the nation.

Lawmakers quickly passed legislation that allowed Poland’s government to appoint and dismiss the executives in charge of public television and radio broadcasters.

Since then, over 200 TVP employees, including the most prominent news anchors and reporters in Poland, have either been fired or quit. Many of their replacements came from conservative pro-government media outlets.

The government has also been accused of using state-run and party friendly media outlets to target journalists it finds disagreeable.

Mariusz Kowalewski, a former employee of the state-run Television News Agency said that he received orders from his superiors to find dirt on leading liberal journalists, including Tomasz Lis, editor in chief of Poland’s Newsweek, and Mr. Kurski of Gazeta Wyborcza.

The agency, he said, even sent a drone to surveil the Lis family home.

His former superiors denied that and said that the comments are “a product of a vivid imagination infected with the need for revenge.”

Tomasz Lis’s ex-wife Hanna, a well known journalist who used to work as a news anchor at TVP but was fired in 2016, publicly condemned her old bosses last month. On Twitter, she posted video that she said was from the drone.

“This is the first time I got a bird’s-eye view of my house in Konstancin,” she tweeted. She noted that it was ironic that she “cofinanced this spy drone by paying taxes that financed this pathology called TVPiS, and more broadly: PiS.”