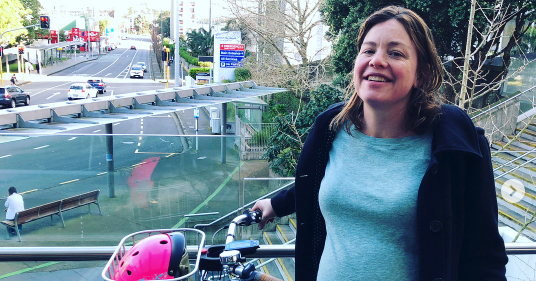 WELLINGTON, New Zealand — Since taking office, New Zealand’s prime minister has broken boundaries and made headlines by becoming only the second sitting world leader to give birth, taking six weeks of parental leave and returning to her leadership role with a baby in tow and nary a fuss.

Now comes the New Zealand minister who cycled to a hospital on Sunday to give birth.

Julie Anne Genter, minister for women and associate minister for health and transport, posted photographs on social media of her “mostly downhill” trip to the hospital while at full term.

She was due to have labor induced at Auckland City Hospital, and is expected to become the second New Zealand government minister to deliver a baby this year, after Prime Minister Jacinda Ardern.

Ms. Genter, 38, noted on social media on Aug. 10 that she was “40 weeks + 4 days” pregnant, and “still waiting” to give birth. She plans to take three months of parental leave after the birth of the child, her first.

Ms. Genter said on social media that it was a “beautiful Sunday morning for a bike ride,” and that she and her partner, Peter Nunns, had cycled to the hospital because there was not “enough room in the car for the support crew.”

She added on Instagram, “It also put me in the best possible mood!”

Auckland City Hospital, where Ms. Genter is to give birth, is also where Ms. Ardern delivered her first child, Neve Gayford, in June. The prime minister, 38, returned to work this month.

Benazir Bhutto, then Pakistan’s prime minister, became the first world leader to give birth in office when she had her second child, a daughter, in 1990.

Ms. Ardern announced her pregnancy in January, saying that she would be both “prime minister and a mum,” and setting off a lively conversation in New Zealand about the role of working mothers.

While the prime minister noted on her return to work that she was “very, very lucky” and in a “privileged” position compared with most women in New Zealand, her dual role has inspired many in the South Pacific country.

A former New Zealand prime minister, Helen Clark, wrote in The Guardian in June that Ms. Ardern had proved that “no doors are closed to women.”

During New Zealand’s election last year — which brought the center-left Labour Party, led by Ms. Ardern, to power — at least five lawmakers were parents of children less than a year old. That prompted an attempt by Parliament to make the legislative complex more family friendly.

A ban on children in the parliamentary swimming pool was lifted, a weekly parent-and-child swimming session was instated, and plans are underway to build a playground on the front lawn.

Ms. Genter’s bicycle ride on Sunday was not the first trip to Auckland City Hospital to make headlines. Ms. Ardern was driven there in June by her partner, Clarke Gayford, in the couple’s car, rather than using a government vehicle or a driver.

Mr. Gayford is now a stay-at-home parent to Neve. Ms. Genter’s partner, Mr. Nunns, will assume the same role for their child, and she has said she plans to resume some ministerial duties from her home in Auckland, New Zealand’s largest city, six weeks after the birth.

Ms. Genter, who was born in Minnesota and studied at the University of California, Berkeley, joined the left-leaning Green Party as a volunteer shortly after migrating to New Zealand in 2006, and she has represented the party in Parliament since 2011. She previously worked as a transport and planning consultant.

She received her ministerial posts as part of the Green Party’s agreement to govern with Ms. Ardern’s Labour Party and with New Zealand First.

Public transport and bicycles are popular methods of transportation for Green Party lawmakers, whose policies have traditionally centered on environmental advocacy.

On its Twitter account, the Green Party declared Ms. Genter’s bicycle journey to the hospital “the most #onbrand thing ever.”