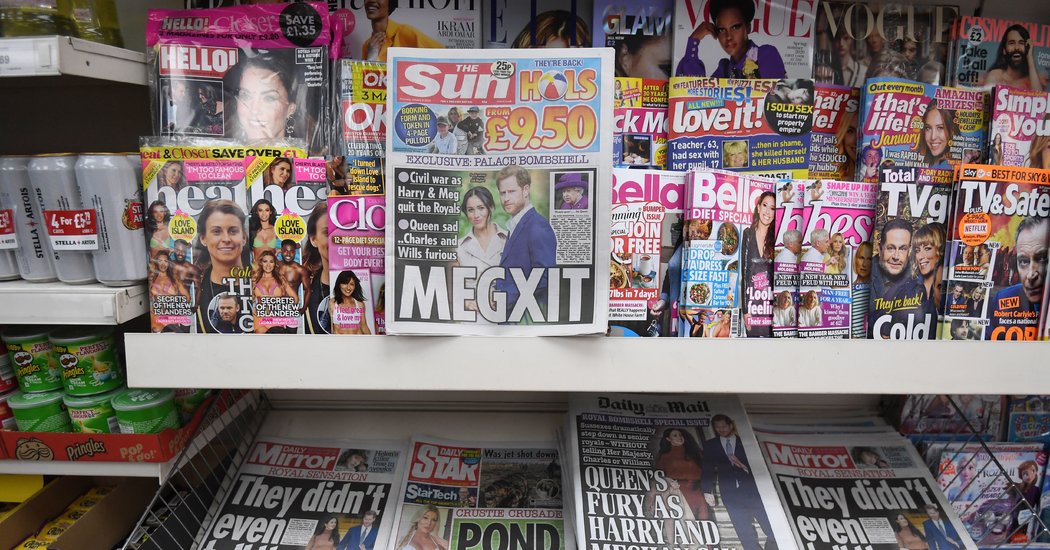 Last fall, Prince Harry seemed to have everything a person could want: A luminous wife, a perfect baby and an extended stay in Africa, a region he has always loved.

And yet, when he spoke to his old friend, the journalist Tom Bradby, he sounded traumatized, as if the events of the previous two years had dragged him back to the hell of his 13th summer, when his mother died in a car crash, speeding away from paparazzi.

His wife Meghan, the Duchess of Sussex, was also grim about the life she had chosen, telling Mr. Bradby that she should have paid more attention when friends warned her about getting involved with Prince Harry.

“My British friends told me, ‘I’m sure he’s great, but you shouldn’t do it, because the British tabloids will destroy your life,’” she said. “I, very naïvely — I’m an American, we don’t have that there — I said, ‘What are you talking about? That doesn’t make sense.’”

Much will be written, in the coming days and months, about rifts between the couple and the royal family, or of a millennial prince rejecting the old-fashioned life offered to him.

But for Prince Harry, the British tabloid press was always the worm in the apple.

Other members of the family have accepted, as part of the bargain they were born into, the tabloid feeding frenzy: zoom lenses poking out of the shrubbery; school friends offered cash to betray their confidence; story lines, some of them invented, casting them as lazy, uncouth and self-indulgent.

But Harry’s fury over press coverage became more visceral as his feelings for his wife and child grew. He said it openly: He blamed the media for his mother’s death.

“My deepest fear is history repeating itself,” he wrote in a statement in October. “I lost my mother and now I watch my wife falling victim to the same powerful forces.”

For generations, Britain’s news outlets have been locked in a power struggle with the family, sometimes ratcheting up negative coverage in response to curtailed access. In private, editors boasted of their ability to manipulate public opinion, as with a drumbeat of reports critical of Prince William’s work habits, branding him “Work-Shy Wills.”

In an interview, Stig Abell, who served as the director of Britain’s Press Complaints Commission, a regulatory body, described the relationship as “a hug that was always threatening to become an assault.”

The Duke and Duchess of Sussex, from the first, made it clear that they did not feel any obligation to abide by that tradition, cherry-picking preferred news outlets and building a direct connection with the public through their Instagram feed.

“The gentleman’s agreement between the royals and the British media was always based on the fact that they needed each other,” Mr. Abell said. “But we are seeing the fragmentation of media, the rise of social media, combined with the fact that they are a brand in and of themselves. They are a global phenomenon. If they don’t need the media, the question is, why would they have a relationship with the media?”

Wednesday’s bombshell announcement, in which the couple said they would “step back” from their official duties, is the culmination of that logic.

“This felt like the natural place it would end up,” said Mr. Abell, now the editor of The Times Literary Supplement.

The Sussexes plan to withdraw from the Royal Rota, the equivalent of an official press pool, and speak instead to journalists from what they term “credible media outlets focused on objective news reporting,” giving preference for “young, up-and-coming” reporters and “grass roots organizations.”

The National Union of Journalists on Thursday blasted the plan.

“Who determines which media is ‘credible’ or ‘objective’?” said Michelle Stanistreet, the organization’s general secretary. “We cannot have a situation where journalists writing about the Duke and Duchess of Sussex can only do so if they have the royal seal of approval.”

Prince Harry’s relationship with his wife, whom he met on a blind date in the summer of 2016, has been punctuated by conflict with the tabloids from the beginning.

Responding to the of coverage of his new girlfriend — The Daily Mail ran an article headlined, “Harry’s girl is (almost) straight outta Compton” — he released a highly unusual statement, accusing media outlets of allowing “racial undertones” to creep into their coverage.

But if he thought this would win her more delicate treatment, he was wrong. It was war.

In the run-up to the wedding, newspapers feasted on unflattering coverage of Ms. Markle’s father, a 73-year-old former Hollywood lighting director living quietly by himself in Mexico. The couple responded by allowing journalists minimal access to St. George’s Chapel for the wedding.

The spiral deepened during the duchess’s pregnancy, when The Daily Mail published an emotional, handwritten letter she had written to her father, pleading with him to “please stop creating so much pain.”

When their son was born, in April of 2019, they announced they would skip the ritual photo opportunity outside the maternity ward, releasing few details about her labor and publishing their own photograph of the child on their Instagram feed.

This was not satisfactory, said Arthur Edwards, 79, who spent decades documenting the royal family as a photographer for The Sun.

“Well, we saw a picture of the baby’s fingers?” he said in an interview. “They were treating us with total disrespect. The taxpayer just forked out three million pounds for state-of-the-art décor of their home, and you can’t put out a good picture of your child?”

Mr. Edwards was skeptical about Prince Harry’s comparison of his wife’s treatment with his mother’s.

Mr. Edwards acknowledged that coverage of the duchess had been “nasty,” especially at the early stage of their relationship, but said the prince should have taken the blow without complaint.

“The Prince of Wales has had way worse than that. He was way down the approval rating, but you know what he did? He put down his head and worked hard, and now he is the most popular member of the family,” he said.

Asked how Prince Harry would fare in the British news media, he was foreboding. “He has gone down the approval ladder at a fast rate, I’m afraid,” he said.

But response on social media told a different story, with many commentators celebrating their move. The couple’s new website, sussexroyal.com, attracted so much interest that, for long stretches on Wednesday afternoon, it would not load.

The photographs used to illustrate the news showed an exuberant couple on their way out of a visit to Canada’s High Commission in London, smiling radiantly, as if they had laid down a heavy burden.

Mr. Abell said it all signaled that this was “a considered act.”

“I think this shows they believe they hold the cards,” he said. “Play it forward, what’s the negative effect of this? A whole bunch of criticism in the press? Is that going to change anyone’s position? If they don’t want to be part of the royal family, they don’t need the consent — or the good will — of the British press.”