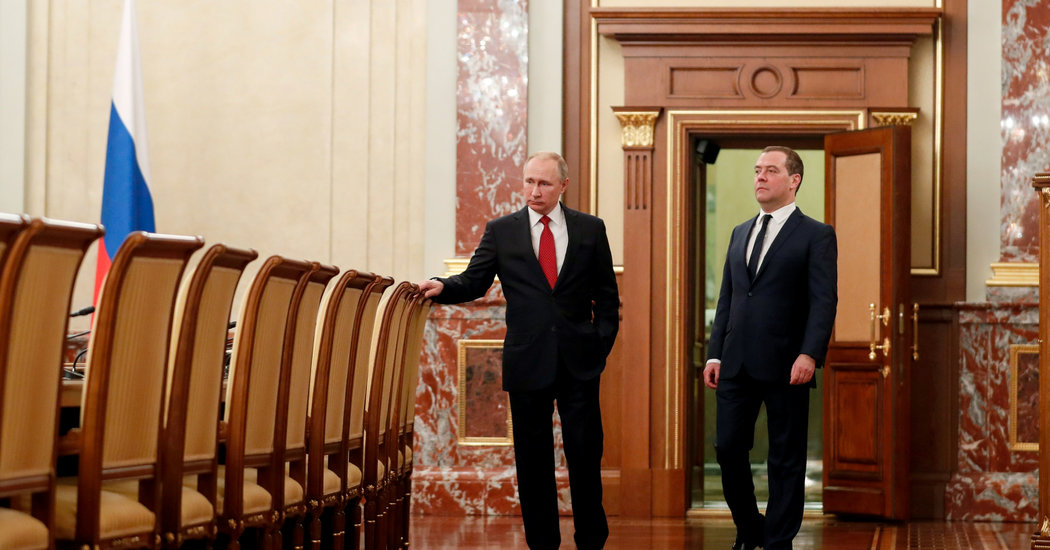 MOSCOW — Prime Minister Dmitri A. Medvedev of Russia abruptly resigned on Wednesday, shortly after his political patron, President Vladimir V. Putin, sent the country’s political elite into a swirl with proposals for sweeping constitutional changes that could extend his hold on power for many years.

In a statement issued by the Russian news agency Tass, Mr. Medvedev, a lawyer who has known Mr. Putin since they worked together in St. Petersburg in the 1990s, linked the unexpected resignations to an overhaul put forward earlier on Wednesday by Mr. Putin.

As a replacement for Mr. Medvedev as Russia’s prime minister, Mr. Putin on Wednesday evening appointed Mikhail V. Mishustin, a little-known bureaucrat who has served for the past decade as head of the Federal Tax Service.

Mr. Putin, who under current law must step down in 2024, proposed amending the Russian Constitution to expand the powers of Parliament and a body called the State Council, which currently carries little weight.

Mr. Medvedev said those moves would “introduce significant changes” to “the balance of power” between the executive, the legislature and the judiciary. Mr. Putin named him as deputy head of Russia’s Security Council, a powerful body that includes defense and security officials.

It was not immediately evident whether the resignations signaled a rift at the top of Russia’s hierarchy or were part of a coordinated but as-yet-unclear plan by Mr. Putin to hold onto power and reshape the political system that has been in place with only minor adjustments since the early 1990s.

Mr. Putin described the proposed constitutional changes in his annual state of the nation address on Wednesday as an effort to enhance democracy. They would be the first major overhaul of Russia’s political system since 1993, when the country’s first democratically elected president, Boris N. Yeltsin, sent tanks into the center of Moscow to subdue a rebellious legislature and then ordered a referendum to endorse a new Constitution.

Mr. Putin, on a roll abroad but becalmed at home by Russia’s stagnant economy, has a long record of keeping friends and foes off balance, and he has ensured that he remain the arbiter on all important decisions in Russia since Mr. Yeltsin resigned on Dec 31, 1999.

The Constitution limits a president to two consecutive terms, meaning that without a change, Mr. Putin would have to leave that office in 2024. But he has dropped hints about keeping his grip on power beyond that date. Russia has been abuzz for months with speculation about whether he would come up with a maneuver to extend his rule — or, if not, who might succeed him.

Already in power for 20 years, longer than any Kremlin leader since Stalin, Mr. Putin shed no light on Wednesday on his own exact plans, but instead opened a Pandora’s box of possible options. The resulting uncertainty puts the political elite off balance, helping to ensure that Mr. Putin avoids becoming a lame duck and remains the pivot around which the country revolves.

Opposition politicians seized on his proposals as evidence that he planned to stay in power indefinitely. Mikhail M. Kasyanov, a former prime minister who is now a fierce critic of Mr. Putin, said the president had given a “clear answer” to questions about his future: “I will remain president forever.”

Alexander Baunov, a political analyst in Moscow, drew a very different conclusion in remarks on Twitter: “The president will be weaker and it is beyond doubt now (despite earlier speculation that he would somehow stay on) that the president will no longer be Putin.”

Mr. Putin could be contemplating a return to the prime minister’s office, but this time at the helm of a newly empowered Parliament.

Others saw signs that Mr. Putin intended to leave his post as president and create a system similar to that of Kazakhstan, where the longtime president, Nursultan A. Nazarbayev, who stepped down last year as his country’s formal leader, took the new title as “leader of the people” and has remained in overall control.

Mr. Medvedev’s move from the premiership to the security council reminded many analysts of the way in which Mr. Putin shoved him aside as president in 2012.

When Mr. Medvedev held the presidency, he and his patron were not always in sync, to the annoyance of Mr. Putin, who undid several of his measures.

In particular, Mr. Putin was angry that Mr. Medvedev had declined to use a United Nations veto in 2011 to block airstrikes against Libya, attacks that helped topple the government of Col. Muammar el-Qaddafi.