Financial markets reeled again on Wednesday, as the coronavirus continued its relentless spread, governments ramped up efforts to contain it and investors waited for lawmakers in Washington to take action on proposals to bolster the American economy.

The selling reflected another extreme swing in sentiment on Wall Street. Stocks jumped on Tuesday as the White House called for urgent action to pump $1 trillion into the economy.

Stocks did recoup some losses late in the day Wednesday, as the Senate began to vote on a bill to provide sick leave, jobless benefits, free coronavirus testing and other aid. President Trump is expected to sign it. But when all was said and done, the S&P 500 fell about 5 percent, stocks in Europe were sharply lower and oil prices cratered.

The renewed selling showed how fragile any gains have become as long as the virus continues to spread and the number of cases continues to grow at a staggering rate.

The turmoil on Wednesday was evident in other markets as well. The British pound fell to its lowest level in 35 years against the American dollar.

The American oil benchmark, West Texas Intermediate, dropped 24 percent to just over $20 a barrel, the lowest price since 2003. The global Brent benchmark fell to just above $25 a barrel, a level just below January 2016. Oil prices are more than 60 percent below where they were at the beginning of the year.

Rystad Energy, a consulting firm, said that supply of oil worldwide would exceed demand by about three million barrels a day in April as air travel and other transportation ground to a halt.

“With each day, there seems to be yet another trap door lying beneath oil prices, and we expect to see prices continue to roil,” said Louise Dickson, a Rystad analyst.

The American economy is poised for the worst quarterly contraction ever, with a sudden slowdown in economic activity that is more akin to what happened in wartime Europe than during previous American slowdowns like the financial crisis more than a decade ago or even the Great Depression.

Greg Daco, chief U.S. economist at Oxford Economics, thinks the economy could shrink by 12 percent next quarter, with unemployment hitting 10 percent in April.

The ‘Trump Bump’ in stocks is nearly gone.

As it rose to record heights, the stock market had perhaps no bigger cheerleader than President Trump, who had seen the rally as an endorsement of his economic policies and crowed about the gains throughout his presidency.

But stocks have been falling for a month, and the severity of that drop has all but wiped out the gains that followed Mr. Trump’s inauguration. In intraday trading on Wednesday, the Dow Jones industrial average fell below its pre-inauguration closing level of 19,732 before recovering slightly. It ended the day less than one percent above its Jan. 19, 2017 close.

The S&P 500, a better measure of the broader market, is about 6 percent above its pre-inauguration level.

Mr. Trump’s victory in 2016, along with the Republican Party’s control of Congress, set off a surge in share prices as investors looked forward to the prospect of steep cuts to corporate tax rates and an administration stocked with industry-friendly faces.

In December 2017, Mr. Trump delivered a sweeping tax overhaul. By the following month, the S&P 500 was up more than 30 percent, and the gains kept coming for much of the year. For Mr. Trump, this was a surefire barometer of his success as president.

Europe plans a bond-buying program to counter the economic fallout.

The European Central Bank said it would embark on an enormous wave of bond purchases intended to counter the “serious risks” to the eurozone caused by the coronavirus pandemic.

The bank will buy up to 750 billion euros, or $820 billion, in government and corporate bonds and other assets, pumping cash into financial markets deeply rattled by the pandemic.

The announcement came after an unusual late-night conference call among members of the bank’s Governing Council, which followed signs that bond investors were losing faith in Italy’s ability to repay its enormous government debt. If Italy’s borrowing costs reach unsustainable levels, the future of the eurozone would be at stake.

The bank said it would buy even more assets if need be.

“The Governing Council is fully prepared to increase the size of its asset purchase programs and adjust their composition, by as much as necessary and for as long as needed,” the bank said in a statement. “It will explore all options and all contingencies to support the economy through this shock.”

Ford, G.M. and Fiat Chrysler will close their factories in the United States.

Fiat Chrysler, Ford Motor and General Motors said on Wednesday that they would close their plants in the United States, Canada and Mexico until at least the end of March, a decision that comes as automakers are under intense pressure to protect workers from the spreading coronavirus.

Ford said in a statement that it would shut down factories after the end of Thursday evening shifts. G.M. quickly followed suit, saying it would stagger plant closings to “ensure that production stops in a safe and orderly fashion.”

“We have been taking extraordinary precautions around the world to keep our plant environments safe and recent developments in North America make it clear this is the right thing to do now,” G.M.’s chief executive, Mary Barra, said in a statement.

The company also said sales had been slowing, a trend it expects to continue as more people confine themselves to their homes to avoid contracting or spreading the virus.

The United Automobile Workers union has called on the three Detroit carmakers to shut down manufacturing plants across the United States for two weeks to prevent the spread of the coronavirus. The three automakers employ 151,000 U.A.W. members. 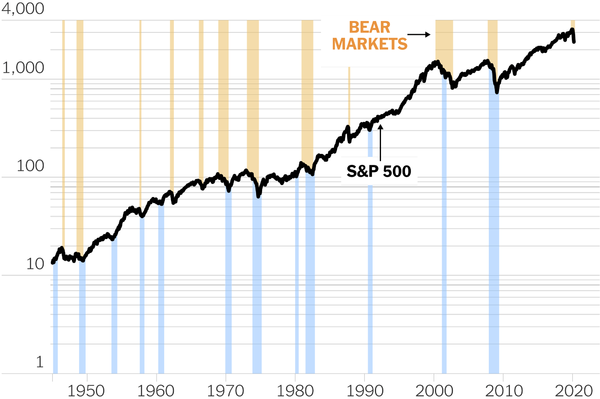 Since World War II, there have been 12 bear markets and 12 recessions, but not every bear market has preceded a downturn in the economy.

Since World War II, the S&P 500 has entered a bear market — a drop of 20 percent from its peak — 12 times, including the one we are in. There have been as many recessions in that time.

However, not every bear market preceded a recession. The stock market isn’t an indicator of economic activity, and therefore isn’t necessarily a predictor of recessions.

But steep declines in the stock market have often coincided with a downturn in the economy. Of the bear markets that came before the current one, three occurred without a recession afterward.

The White House is considering a $1 trillion bailout for small businesses.

Republican senators and Trump administration officials are considering a proposal by a pair of conservative economists that would extend potentially $1 trillion in assistance to small businesses to keep them afloat during the pandemic and keep workers on their payrolls.

The loans would come from commercial banks, which would lend as much as 12 weeks of revenue to small firms, according to a copy of the proposal obtained by The New York Times. The federal government would then agree to pay off those loans in full — but only if the company did not lay off workers.

The plan comes from Glenn Hubbard of Columbia University, a former adviser to President George W. Bush, and Michael R. Strain of the American Enterprise Institute. It estimates the possible cost to the government at $1 trillion, but promises a more precise cost estimate to come.

Facebook will add coronavirus information in a central location.

Mark Zuckerberg, Facebook’s chief executive, said in a conference call on Wednesday that the social network would begin inserting a “Coronavirus Information Center” at the top of users’ News Feeds to act as a central location for people to get reliable and timely information about the pandemic.

“The top priority and focus for us has been making sure people can get access to good authoritative information from trusted health sources,” Mr. Zuckerberg said on the call. He added that the goal was to make information from organizations like the Centers for Disease Control and World Health Organization available for its users.

Facebook expects to roll out the feature to the News Feed — which reaches more than two billion people regularly — in the United States and Europe within the next 24 hours, and in other countries and languages in the days ahead.

Catch up: Here’s what else is happening.