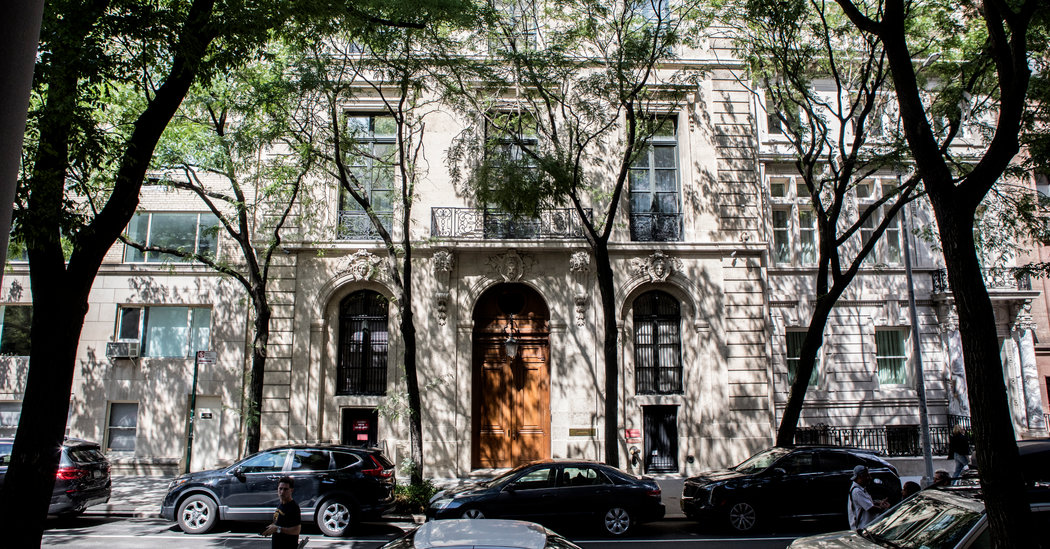 Almost exactly a year ago, on Aug. 16, 2018, I visited Jeffrey Epstein at his cavernous Manhattan mansion.

The overriding impression I took away from our roughly 90-minute conversation was that Mr. Epstein knew an astonishing number of rich, famous and powerful people, and had photos to prove it. He also claimed to know a great deal about these people, some of it potentially damaging or embarrassing, including details about their supposed sexual proclivities and recreational drug use.

So one of my first thoughts on hearing of Mr. Epstein’s suicide was that many prominent men and at least a few women must be breathing sighs of relief that whatever Mr. Epstein knew, he has taken it with him.

During our conversation, Mr. Epstein made no secret of his own scandalous past — he’d pleaded guilty to state charges of soliciting prostitution from underage girls and was a registered sex offender — and acknowledged to me that he was a pariah in polite society. At the same time, he seemed unapologetic. His very notoriety, he said, was what made so many people willing to confide in him. Everyone, he suggested, has secrets and, he added, compared with his own, they seemed innocuous. People confided in him without feeling awkward or embarrassed, he claimed.

I’d never met Mr. Epstein before. I had contacted him because my colleagues and I had heard a rumor that he was advising Tesla’s embattled chief executive, Elon Musk, who was in trouble after announcing on Twitter that he had lined up the funding to take Tesla private.

The Securities and Exchange Commission began an investigation into Mr. Musk’s remarks, which moved markets but didn’t appear to have much basis in fact. There were calls for Mr. Musk to relinquish his position as Tesla’s chairman and for Tesla to recruit more independent directors. I’d heard that Mr. Epstein was compiling a list of candidates at Mr. Musk’s behest — and that Mr. Epstein had an email from Mr. Musk authorizing the search for a new chairman.

Mr. Musk and Tesla vehemently deny this. “It is incorrect to say that Epstein ever advised Elon on anything,” a spokeswoman for Mr. Musk, Keely Sulprizio, said Monday.

When I contacted Mr. Epstein, he readily agreed to an interview. The caveat was that the conversation would be “on background,” which meant I could use the information as long as I didn’t attribute it directly to him. (I consider that condition to have lapsed with his death.)

He insisted that I meet him at his house, which I’d seen referred to as the largest single-family home in Manhattan. This seems plausible: I initially walked past the building, on East 71st Street, because it looked more like an embassy or museum than a private home. Next to the imposing double doors was a polished brass plaque with the initials “J.E.” and a bell. After I rang, the door was opened by a young woman, her blond hair pulled back in a chignon, who greeted me with what sounded like an Eastern European accent.

I can’t say how old she was, but my guess would be late teens or perhaps 20. Given Mr. Epstein’s past, this struck me as far too close to the line. Why would Mr. Epstein want a reporter’s first impression to be that of a young woman opening his door?

The woman led me up a monumental staircase to a room on the second floor overlooking the Frick museum across the street. It was quiet, the lighting dim, and the air-conditioning was set very low. After a few minutes, Mr. Epstein bounded in, dressed casually in jeans and a polo shirt, shook my hand and said he was a big fan of my work. He had a big smile and warm manner. He was trim and energetic, perhaps from all the yoga he said he was practicing. He was undeniably charismatic.

Before we left the room he took me to a wall covered with framed photographs. He pointed to a full-length shot of a man in traditional Arab dress. “That’s M.B.S.,” he said, referring to Mohammed bin Salman, the crown prince of Saudi Arabia. The crown prince had visited him many times, and they spoke often, Mr. Epstein said.

He led me to a large room at the rear of the house. There was an expansive table with about 20 chairs. Mr. Epstein took a seat at the head, and I sat to his left. He had a computer, a small blackboard and a phone to his right. He said he was doing some foreign-currency trading.

Behind him was a table covered with more photographs. I noticed one of Mr. Epstein with former President Bill Clinton, and another of him with the director Woody Allen. Displaying photos of celebrities who had been caught up in sex scandals of their own also struck me as odd.

Mr. Epstein avoided specifics about his work for Tesla. He told me that he had good reason to be cryptic: Once it became public that he was advising the company, he’d have to stop doing so, because he was “radioactive.” He predicted that everyone at Tesla would deny talking to him or being his friend.

He said this was something he’d become used to, even though it didn’t stop people from visiting him, coming to his dinner parties or asking him for money. (That was why, Mr. Epstein told me without any trace of irony, he was considering becoming a minister so that his acquaintances would be confident that their conversations would be kept confidential.)

If he was reticent about Tesla, he was more at ease discussing his interest in young women. He said that criminalizing sex with teenage girls was a cultural aberration and that at times in history it was perfectly acceptable. He pointed out that homosexuality had long been considered a crime and was still punishable by death in some parts of the world.

Mr. Epstein then meandered into a discussion of other prominent names in technology circles. He said people in Silicon Valley had a reputation for being geeky workaholics, but that was far from the truth: They were hedonistic and regular users of recreational drugs. He said he’d witnessed prominent tech figures taking drugs and arranging for sex (Mr. Epstein stressed that he never drank or used drugs of any kind).

I kept trying to steer the conversation back to Tesla, but Mr. Epstein remained evasive. He said he’d spoken to the Saudis about possibly investing in Tesla, but he wouldn’t provide any specifics or names. When I pressed him on the purported email from Mr. Musk, he said the email wasn’t from Mr. Musk himself, but from someone very close to him. He wouldn’t say who that person was. I asked him if that person would talk to me, and he said he’d ask. He later said the person declined; I doubt he asked.

When I later reflected on our interview, I was struck by how little information Mr. Epstein had actually provided. While I can’t say anything he said was an explicit lie, much of what he said was vague or speculative and couldn’t be proved or disproved. He did have at least some ties to Mr. Musk — a widely circulated photo shows Mr. Musk with Ghislaine Maxwell, Mr. Epstein’s confidante and former companion, at the 2014 Vanity Fair Oscars party.

“Ghislaine simply inserted herself behind him in a photo he was posing for without his knowledge,” Ms. Sulprizio, the spokeswoman for Mr. Musk, said.

It seemed clear Mr. Epstein had embellished his role in the Tesla situation to enhance his own importance and gain attention — something that now seems to have been a pattern.

About a week after that interview, Mr. Epstein called and asked if I’d like to have dinner that Saturday with him and Woody Allen. I said I’d be out of town. A few weeks after that, he asked me to join him for dinner with the author Michael Wolff and Donald J. Trump’s former adviser, Steve Bannon. I declined. (I don’t know if these dinners actually happened. Mr. Bannon has said he didn’t attend. Mr. Wolff and a spokeswoman for Mr. Allen didn’t respond to requests for comment on Monday.)

Several months passed. Then early this year Mr. Epstein called to ask if I’d be interested in writing his biography. He sounded almost plaintive. I sensed that what he really wanted was companionship. As his biographer, I’d have no choice but to spend hours listening to his saga. Already leery of any further ties to him, I was relieved I could say that I was already busy with another book.

That was the last I heard from him. After his arrest and suicide, I’m left to wonder: What might he have told me?