SHENZHEN, China — Some of the young Chinese hockey players receiving trophies here on a recent morning looked stunned, as if they had seen a ghost.

But, yes, it actually was Wayne Gretzky, the N.H.L.’s leading career goal scorer, whose giant hands had shaken theirs on a red carpet at center ice.

Gretzky was in Shenzhen over the weekend to open a youth hockey school, on the same day that the Boston Bruins played the Calgary Flames in an exhibition game at an adjacent arena.

The overall message of the day seemed to be that, decades after the N.B.A. began building a following in China, the N.H.L. is determined to play catch-up.

“This is wonderful for our sport to branch out, to show people how great our game is,” Gretzky said during an interview in the rink’s parking lot, around the corner from where the Stanley Cup was on display in Shenzhen’s sweltering, subtropical heat.

This is the second year of N.H.L. preseason games in China as part of an agreement, a joint effort of the league and the N.H.L. Players’ Association, to play games here in six of eight consecutive years. The Bruins and the Flames were scheduled to face off again on Wednesday in Beijing, more than 1,200 miles north of Shenzhen.

David Proper, the N.H.L.’s executive vice president of media and international strategy, said during an interview in Shenzhen that the league’s ambitions in China were a response to a plan by President Xi Jinping to have 300 million winter sports enthusiasts in the country by the time it hosts the 2022 Olympics in Beijing.

If hockey grows in China over the next decade “to a point where it’s not N.B.A. level but something significant, well then we may reassess not just growing the sport but how to build our business,” Proper said.

Analysts say the league’s China development strategy is loaded with opportunities to attract new fans and talent but also deep uncertainties about what sort of growth is possible.

One crucial question is whether the league would allow its players to participate in the 2022 Olympics — and, if not, how the decision would go over with Chinese fans and officials. (The N.H.L. said no to the 2018 Winter Games in South Korea.)

N.H.L. executives “have to straddle this line where they’re saying, ‘It’s important, but it’s not that important,’” Dan Mason, a professor of sports management at the University of Alberta in Canada who has consulted for sports organizations in China, said of the Beijing Games.

“But at the same time, they don’t want to alienate the Chinese government because in the long run the popularity of the N.H.L. in China is going to be a function of how many kids are playing and growing up loving the sport, and wanting to follow those players on television,” he added.

N.H.L. Commissioner Gary Bettman told reporters in Shenzhen that the Olympics in their current form were disruptive for the league, and that the league’s long-term effort to grow hockey in China would not be defined by a single tournament.

But, he added cryptically, “Lots of things can happen between now and then.”

For now, the league has signed broadcasting and live-streaming deals with the Chinese companies CCTV and Tencent, and partnered with several others, including the beer company Tsingtao. League officials declined to provide viewership figures or specific revenue targets.

But in a sign of how much the N.H.L. trails the N.B.A. in China, the hockey league has only about 290,000 followers on Sina Weibo, a popular Chinese social media platform; the N.B.A. has more than 37 million.

André Richelieu, an expert in sports marketing at Université du Québec à Montréal, said in an email that the N.H.L. would need to “demonstrate an unambiguous commitment to China” in order to build trust and be successful there.

“This will require substantial resources for an uncertain result, which is sometimes contrary to the short-term minded approach of American business endeavors,” he said.

Building the sport in China would be far easier if the country developed a puck-wizard analog of the former N.B.A. star Yao Ming, said Zhou Song, the general manager of the Shenzhen branch of Kunlun Red Star, a Chinese hockey club that has a Beijing-based professional team in Russia’s Kontinental Hockey League and a Shenzhen-based team in the Canadian Women’s Hockey League. Most of the players on the men’s team are from Europe and Canada, while the women’s program has a higher percentage of Chinese players, many of them from the northern cities Harbin and Qiqihar.

Even if a Chinese star came along, it is still difficult to estimate how long it would take the N.H.L. to recoup its investments in China, said Zhou, whose club employs Gretzky as a paid ambassador.

The Bruins-Flames preseason game at the Shenzhen Universiade Sports Center felt like any other N.H.L. game, with a few exceptions. The aisles were lined with red Chinese lanterns, for example, and fans received complimentary copies of a Guide to Hockey, which explained potentially confusing terms like icing, power play and high-sticking.

Wang Kai Yuan, a therapist from Shenzhen, attended the game with some friends who left well before the third period, out of boredom. But he stood, riveted, through a tense overtime and shootout. Boston won the game, 4-3, with shootout goals from Brad Marchand and Jake DeBrusk.

Mr. Wang, 43, said he was primarily a basketball fan, but he was fascinated by ice hockey’s combination of precision and brute force. “I don’t know the rules, but I know it’s exciting,” he said, body-checking some thin air for emphasis.

In the same nosebleed section, a group of high school classmates were debating the game’s most elemental details.

One of them, Kuang Yan Ling, said she had initially assumed that a hockey puck was made from ice. “Then I realized that if it were really ice, it would break when you hit it,” she added.

Her friends took this in.

“Maybe it’s plastic,” one of them, Sun Zhong Ying, offered. “Like the stuff you make bottles from?”

The answer was waiting in the Guide to Hockey: “The puck shall be made of vulcanized rubber, one inch thick and three inches in diameter, and shall weigh between five and one-half ounces and six ounces.”

New This Season in a Canadian Hockey League: Road Trips to China 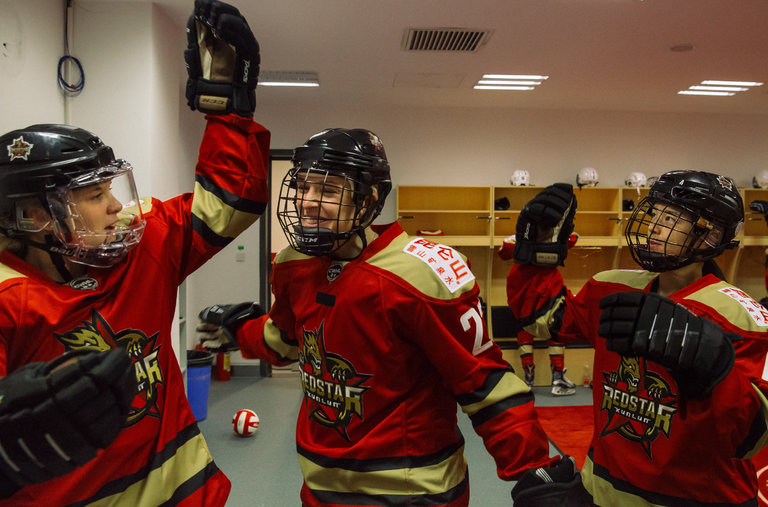 A version of this article appears in print on , on Page B13 of the New York edition with the headline: Chasing Goal, China Calls (Who Else?) Gretzky. Order Reprints | Today’s Paper | Subscribe