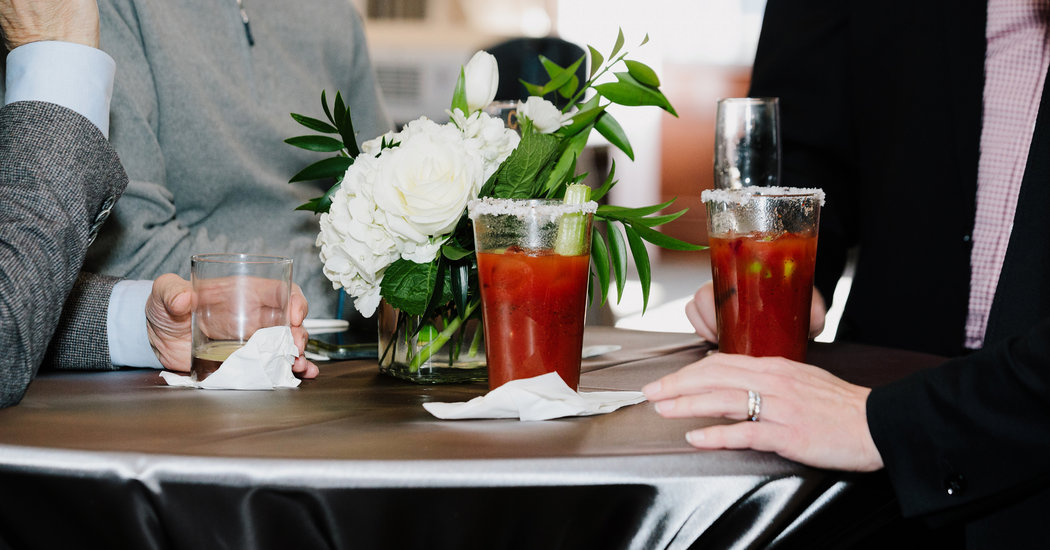 DES MOINES — Every spring, the Washington impresario Tammy Haddad hosts a brunch before the White House Correspondents’ Dinner that is a required stop for reporters, editors, network news anchors and political operatives.

That crowd is currently in Iowa — drinking, schmoozing, occasionally driving off to see a presidential candidate or two — so Ms. Haddad, a media consultant and TV veteran, decided to bring the fun to them. Hence the Snowflake Garden Brunch, a Georgetown-in-the-cornfields gathering in Des Moines on Sunday that attracted a healthy chunk of the visiting political class.

Attendees were greeted with mimosas and a wall of Krispy Kreme doughnuts. The anchor Greta Van Susteren chatted up Senator Joni Ernst of Iowa. Mayor Pete Buttigieg’s spokeswoman, Lis Smith, gossiped with executives from ABC and NBC. The 15-year-old son of Janice Min, the former Us Weekly and Hollywood Reporter editor, was on-hand reporting for a group called KidUnity.

The sponsors included Wells Fargo, the health insurer Anthem and a Washington-based lobbyist for the wind energy industry.

“I’m living the dream at the Wells Fargo brunch,” one reporter said, eyeing an ice sculpture of a cow.

Hundreds of journalists from Washington and New York have been crisscrossing the state for weeks covering the run-up to Monday’s caucuses, seeking insight into the psyche and soul of the average Iowan and stress-testing the abilities of a jumbo field of Democratic hopefuls.

But as at any industry gathering, shoptalk is hard to avoid. These days, Iowa and its journalist hot spots — namely the glaringly lighted, hideously carpeted lobby bar of the Des Moines Marriott Downtown — can feel like a summer camp, trade convention and I.R.L. Twitter rolled into one.

“It’s not quite Mos Eisley,” said Edward-Isaac Dovere, a staff writer for The Atlantic, referring to the alien cantina in “Star Wars.” “But everyone does seem to come through eventually.”

On a recent evening at the Marriott, puffer vests abounded. Jake Tapper of CNN held court, and Ed Henry of Fox News popped by. Senior Democratic officials gossiped with correspondents from BuzzFeed, CNN, Politico and Time. Bloomberg News threw a Super Bowl screening with an open bar and free chicken wings. The Marriott gift shop was selling a T-shirt emblazoned with a logo that seemed tailor made for the visiting clientele: “Hi. Didn’t I Interview You 4 Years Ago?”

It was the kind of crowd that lets out a collective gasp and tweets multiple exclamation points when the final Des Moines Register poll of Iowa voters is abruptly canceled. Which happened on Saturday night.

“There definitely aren’t any caucusgoers there,” Mr. Dovere said, “but it’s where the operatives and reporters just assume everyone is heading.”

The last weekend before the caucuses brings a unique kind of frenzy, along with some dweeby fandom (hey, it’s the “Pod Save America” guys!). More than 400 reporters attended Mr. Buttigieg’s final rally on Sunday at a high school. Television and newspaper executives, in town for a look-see, sat down to steaks at downtown chophouses while rookie embed reporters drank at the Mexican dive El Bait Shop.

Occasionally, the high reporter-to-real-person ratio yields political consequences. John Kerry, the former secretary of state, had the misfortune of sitting next to an NBC reporter at breakfast when he apparently blabbed on the phone about a potential run for the presidency. The story exploded on Twitter before Mr. Kerry issued an obscenity-laced denial.

“Strong ‘overheard on the Acela’ energy,” Rosie Gray, a BuzzFeed News reporter, wrote on Twitter, referring to the Amtrak express train that whooshes the chattering classes between New York and Washington.

Were average Americans following the reports from Iowa? Unclear. With President Trump on trial in the Senate, the ABC, CBS and NBC evening newscasts devoted just 10 minutes of coverage last week to the caucuses, compared with 86 minutes in 2016, according to one study. Correspondents in Iowa, on three-hour drives to candidate forums in Decorah or Fort Madison, made a habit of listening to C-SPAN Radio to keep up with the impeachment proceedings.

Back at Ms. Haddad’s Sunday brunch — which raised money for veterans’ groups — a contingent coalesced around Rob Sand, the state auditor and boyish bright young thing of Iowa Democratic politics.

“You look like a young Pete Buttigieg,” joked Hilary Rosen, the Washington operative and Ms. Haddad’s co-host. Mr. Sand’s fingers flew to his smooth cheeks. “But Pete can grow a beard!” he protested.

Does Mr. Sand resent all these interlopers parachuting in? “I’ve tried to be ‘Iowa nice,’” he said wryly.

Brad Anderson, the Iowa state director at AARP, said in an interview that he appreciated all the national interest in his state. But he advised reporters to spend more time meeting with the people who really mattered: the Iowans who would be caucusing on Monday night.

“Stand on a sidewalk and just start talking to people,” he said. “You’ll get a better sense than at a fancy brunch.”

Mr. Anderson happened to say this while kibitzing at Ms. Haddad’s fancy brunch. Be honest: Will he miss the media when it’s gone?

“I will,” he said, laughing. “I love you guys. I’m not being cheesy here, but the media does appreciate the Iowan approach to this process, and that makes me happy.”