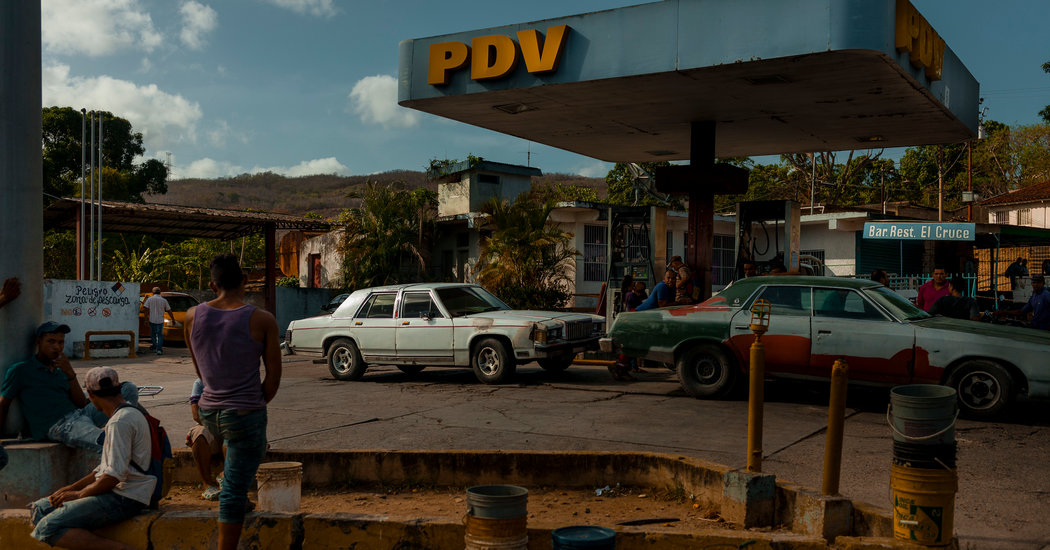 CARACAS, Venezuela — After decades of dominating its oil industry, the Venezuelan government is quietly surrendering control to foreign companies in a desperate bid to keep the economy afloat and hold on to power.

The opening is a startling reversal for Venezuela, breaking decades of state command over its crude reserves, the world’s biggest.

The government’s power and legitimacy has always rested on its ability to control its oil fields — the backbone of the country’s economy — and use their profits for the benefit of its people.

But the nation’s authoritarian leader, Nicolás Maduro, in his struggle to retain his grip over a country in its seventh year of a crippling economic crisis, is giving up policies that once were central to its socialist-inspired revolution.

Under Venezuelan law, the state-run oil company must be the principal stakeholder in all major oil projects. But as that company, Petróleos de Venezuela, or Pdvsa, unravels — under the weight of American sanctions, years of gross mismanagement and corruption — the work is unofficially being picked up by its foreign partners.

Private companies are pumping crude, arranging exports, paying workers, buying equipment and even hiring security squads to protect their operations in a collapsing countryside, according to managers and oil consultants working on the country’s energy projects.

In effect, a stealth privatization is taking place, said Rafael Ramírez, who ran Venezuela’s oil industry for more than a decade before breaking with Mr. Maduro in 2017, in a video address this week.

“Today, Pdvsa doesn’t manage our oil industry, Venezuelans don’t manage it,” said Mr. Ramírez. “In the middle of the chaos generated by the worst economic crisis suffered by the country in its history, Maduro is taking actions to cede, transfer and hand over oil operations to private capital.”

Pdvsa did not respond to requests for comment on its recent concessions to private partners.

The haphazard changes to the oil sector, which have accelerated in recent months, are remaking the oil industry in a nation whose assertive energy policies had, since the 1950s, served as an example to developing countries of how to take control of natural resources.

And they are a stark retreat from the vision of Hugo Chávez, who was Mr. Maduro’s mentor and predecessor. Mr. Chávez nationalized in 2007 the giant holdings of Exxon Mobil and ConocoPhillips and packed Pdvsa’s leadership ranks with political allies dedicated to his socialist-inspired “Bolivarian revolution.”

But Mr. Maduro’s transformation of Venezuela’s oil industry has stemmed the collapse triggered by an American embargo. Sanctions imposed in January 2019 had wiped out about a third of Venezuela’s oil production, bringing it down at one point to the lowest level since the 1940s, according to data from the Organization of the Petroleum Exporting Countries.

Oil production now is still less than a third of the total in 1998, when Mr. Chávez took power. By late 2019, Venezuela had stabilized exports at about a million barrels per day, according to Bloomberg’s tanker tracking data.

The dribble of oil exports has provided Mr. Maduro with foreign revenue at the most critical moment of the country’s economic crisis, allowing him to adjust to sanctions and consolidate his rule.

In the country’s main oil export hub, José, key processing plants and piers are slowly coming to life after near total paralysis in the summer, when Pdvsa was cut off from the global financial system and struggling to cope without its biggest market, the United States, according to shipping agents and oil managers.

The unofficial, partial privatizations of the past year have been led by an unlikely reformer: Manuel Quevedo, a National Guard general with no known oil experience who was appointed by Mr. Maduro to head Pdvsa.

General Quevedo broke with the nationalist rhetoric of his predecessors to hand over operational control of joint oil projects to partners that include Chevron, Russia’s state-run company, Rosneft, some European and Chinese companies and groups of Venezuelan magnates.

“With Pdvsa in crisis mode, they are increasingly handing operational responsibilities and decisions over to the partners,” said Lisa Viscidi, a specialist in Latin American energy issues at Inter-American Dialogue, a Washington-based research group.

The concessions are gradually reducing Pdvsa to little more than a holding company collecting the state’s share of oil field revenues, with most of financial and strategic decisions taken by private partners.

This is a startling decline from just a decade ago, when Pdvsa was the pride of Venezuela and the cornerstone of its economy.

Until the start of the economic crisis in 2013, the company was the source of virtually all of Venezuela’s hard currency. It was also its biggest employer and penetrated all aspects of life in the country, running everything from supermarkets to parks.

Today, oil fields wholly owned by Pdvsa account for less than half of the nation’s remaining oil production, and their output continues to plummet.

Chevron has become the single largest foreign producer of oil in Venezuela, and a crucial part of the country’s stabilization over the past few months.

Its four joint ventures in the country are pumping a gross total of about 160,000 barrels per day, according to two industry sources familiar with the company’s projects, who spoke on condition of anonymity because they weren’t authorized to speak publicly.

Chevron quickly responded to the impact of American sanctions — such as the loss of American light oil that was used to blend with heavy Venezuelan crude to help it move through pipelines — by switching to Venezuelan light oil. By September, the company was able to restart its Petropiar heavy oil processing plant, which has formed the backbone of Venezuela’s oil export recovery.

A senior official with the Trump administration said the activities of Chevron and other foreign oil companies in Venezuela “are clearly of concern.”

But the U.S. government has given Chevron exemptions from sanctions, as recently as last month. “If Chevron is forced to leave Venezuela, non-United States companies will fill the void and oil production will continue,” said Ray Fohr, a company spokesman.

On the export side, Pdvsa’s biggest ally has been Russia’s Rosneft, which over the past year has grown to sell about two-thirds of Venezuela’s oil. Rosneft has quickly replaced Pdvsa’s American sales routes by diverting its oil to Asia, often obscuring the cargo’s source and destination to bypass sanctions, according to companies that monitor tanker traffic.

Barred from the global financial system, Pdvsa has also been forced to cede control to foreign partners in organizing exports, which goes against the country’s energy laws. Over the past few months, Chevron, Rosneft and Italy’s Eni have all directly exported Venezuelan crude.

Pdvsa’s opening of exports — oil cargoes worth millions of dollars — to anyone who can bypass sanctions to line up a vessel, insurance and a customer for the crude has even created a small cottage industry among Venezuela’s elite.

Now, the only thing that matters is that oil continues to flow, said one partner at a joint oil venture, as he scanned his phone, viewing the state company’s cargo offers.

“The historical struggle for resource sovereignty is being sacrificed for operational expediency,” said Antero Alvarado, an energy consultant in Caracas.

Venezuela’s new oil production has allowed the country to import essentials like food, medicine and fuel to keep the country running.

And there are indications that Mr. Maduro’s government wants to take the underhand liberalization further, even rolling back the watershed nationalization of the oil industry that took place in the 1970s.

A group of lawmakers installed at the head of the National Assembly by Mr. Maduro in January — amid an international outcry — has proposed changing energy laws to allow greater private investment.

“In these times of declining output, we have to give space to a national proposal that, first of all, shall give private capital greater participation in exploration, production and marketing of oil,” Leandro Domínguez, a lawmaker, said in a statement.

Mr. Domínguez’s proposal is not recognized by the United States and most European and Latin American countries, who continue to support a rival, opposition-led congressional leadership. The opposition lawmakers oppose any changes to energy laws under Mr. Maduro, creating a legal limbo for foreign oil companies.

Despite the recent changes, there are many reasons to believe Venezuela’s best days as an oil superpower are over, according to Amy Myers Jaffe, an oil expert at the Council on Foreign Relations, and other experts.

Venezuela could gradually recover production to 2.6 million barrels a day over 10 years, but only with investments of over $200 billion, according to projections by IPD Latin America, a consulting firm.

At a time when many oil companies are struggling with declining profits, executives are looking for cheaper and cleaner sources of oil. Even if a political settlement eventually lifts sanctions, Venezuela’s dirty oil, laden with sulfur and other impurities, may find far fewer investors.