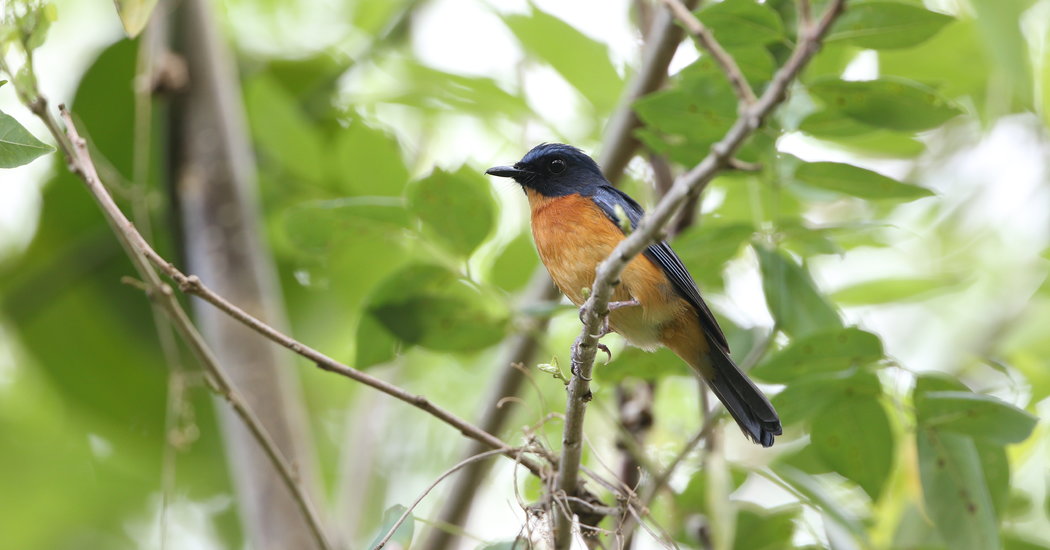 One day in 2009, Frank Rheindt was wandering up a forested mountainside on an Indonesian island when the skies opened up. He had spent months planning this trip, days finding a charter boat that would carry him to this remote place, and hours plodding uphill, but the local tour guides insisted that the rain would make the search impossible.

But on the way down, even with the deluge, he was startled by the sight of a thrush sitting on a log. Dr. Rheindt, an ornithologist, knew that a thrush shouldn’t have been on that island, and that the species normally would seek shelter from the rain.

On his second ascent a few days later, Dr. Rheindt, an associate professor at the National University of Singapore, saw little besides the devastation from a forest fire a few years earlier. But on his third mile-high climb, he found what he had struggled so long and hard to track: birds that no scientist had ever before recorded.

Dr. Rheindt and colleagues published a study in Science on Thursday on their findings from that six-week trip and a follow-up in 2013. They identified five new songbird species and five subspecies — a number considered remarkable from one place and time. Their proposed names for the birds include: Peleng Fantail, Togian Jungle-Flycatcher and Sula Mountain Leaftoiler.

The region off the coast of Sulawesi, Indonesia, that was explored by the team has a rich history, one that Dr. Rheindt anticipated would yield exciting finds. The Indonesian islands of Taliabu, Peleng and Bataduka are in a region named Wallacea, after Alfred Russel Wallace, the 19th-century naturalist who developed a theory of evolution alongside Charles Darwin’s. Wallace and other explorers spent decades cataloging the birds of Wallacea, but they had somehow missed these birds — probably, Dr. Rheindt said, because his own search focused on the highest elevations.

Birds are considered the most well-cataloged class of organisms — far more is known about them than about insects, for instance. But still, 160 new species have been discovered in the last 30 years. Dr. Rheindt’s addition of so many more is a substantial contribution, said Joel Cracraft, curator of the department of ornithology at the American Museum of Natural History in New York City.

“They found 10 new things, which is remarkable,” Dr. Cracraft said. “It really points to how little we actually know.”

The definition of a bird species is somewhat fluid, he said, because 60 percent of bird species interbreed. “This is the internecine battle over species concepts, which goes on and on,” Dr. Cracraft said. He thinks all 10 of Dr. Rheindt’s birds meet criteria he and colleagues established in a 2007 study, which essentially comes down to: “If it’s distinguishable, it’s a new species.”

Dr. Rheindt said it had taken him more than six years since his last expedition to publish his results, because of the need to confirm each bird’s distinctiveness — including genetics, appearance and vocalizations.

It also took time to collaborate with colleagues in Indonesia and get appropriate permits and buy-in from Indonesian authorities. Two of the new species are named in honor of Indonesian officials.

Taliabu and Peleng are surrounded by deep water, suggesting that they had been separated from other land masses for hundreds of thousands of years, enough time for new species to evolve. Since Darwin wrote about his explorations of the Galápagos Islands off Ecuador, scientists have known that isolated island populations often evolve into new species.

Most of the 10 new birds discovered in Wallacea are related to species found elsewhere, but they sing somewhat different songs and have distinct genetics.

The islands are both inhabited — largely at lower elevations than where Dr. Rheindt traveled, but he used logging trails to reach some sites. Human habitation and exploitation of natural resources threaten the islands’ habitats, he said.

Andrew Berry, a lecturer on evolutionary biology at Harvard University, said via email that Wallace would have loved the new study, because it targeted the same types of locations — remote and geologically unusual — that Wallace favored during his exploration of Southeast Asia from 1854 to 1862.

“Wallace was extraordinarily prescient about this,” he said, “complaining as early as 1863 that his fellow Victorians were hypocrites in their insistence, as creationists, that each species was the handiwork of God, yet all the while failing to lift a finger to conserve them.”

In an essay, Wallace wrote that:

Future ages will certainly look back upon us as a people so immersed in the pursuit of wealth as to be blind to higher considerations. They will charge us with having culpably allowed the destruction of some of those records of Creation which we had it in our power to preserve; and while professing to regard every living thing as the direct handiwork and best evidence of a Creator, yet, with a strange inconsistency, seeing many of them perish irrecoverably from the face of the earth, uncared for and unknown.

The new findings highlight the need to catalog and conserve biological diversity, said Jonathan Kennedy, an ornithologist and evolutionary biologist at the University of Sheffield, who wrote a commentary that ran with the new study.

It was from Wallacea, Dr. Kennedy said, that Wallace sent his famous letter to Darwin, laying out what he had reasoned about evolution and persuading Darwin to publish his own ideas for the first time.

“So, the discovery and description of biological diversity can be considered a significant driving force behind the development of one of the greatest ever scientific theories,” Dr. Kennedy said. “The findings of Rheindt et al. suggest to me that there is still so much more to discover and learn about life in this area of the world.”

If there are birds left to be found in places like Wallacea, then there are almost certainly other animal species there that haven’t been scientifically described, Dr. Kennedy said, warning that they “are under threat of becoming extinct before they’re scientifically known.”