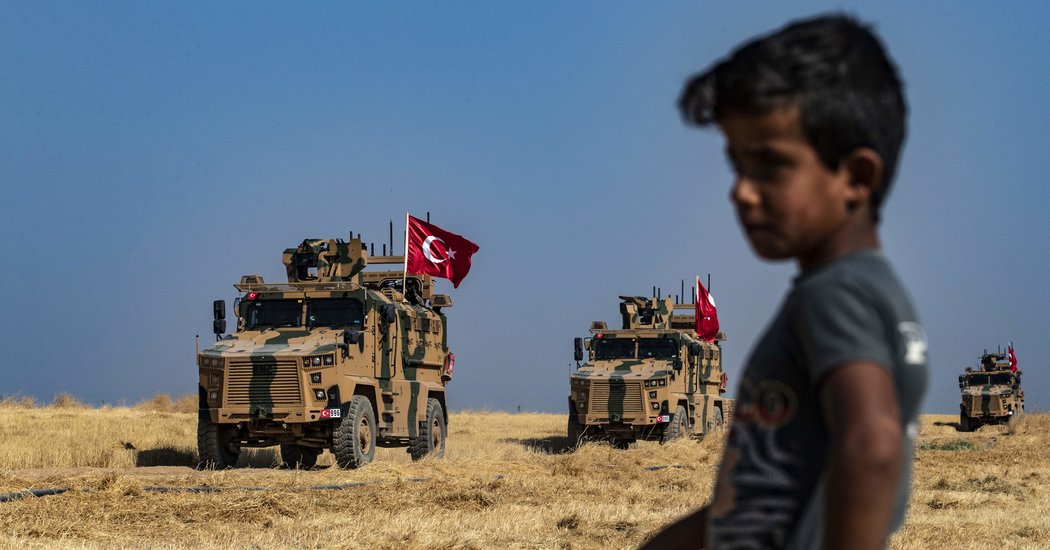 WASHINGTON — In a major shift in United States military policy in Syria, the White House said on Sunday that President Trump had given his endorsement for a Turkish military operation that would sweep away American-backed Kurdish forces near the border in Syria.

Turkey considers the Kurdish forces to be a terrorist insurgency, and has long sought to end American support for the group. But the Kurdish fighters, which are part of the Syrian Democratic Forces, or S.D.F., have been the United States’ most reliable partner in fighting the Islamic State in a strategic corner of northern Syria.

Now, Mr. Trump’s decision goes against the recommendations of top officials in the Pentagon and the State Department who have sought to keep a small troop presence in northeast Syria to continue operations against the Islamic State, or ISIS, and to act as a critical counterweight to Iran and Russia.

Administration officials said that Mr. Trump spoke directly with President Recep Tayyip Erdogan of Turkey on the issue on Sunday. And the officials indicated that the 100 to 150 United States military personnel deployed to that area would be pulled back in advance of any Turkish operation but that they would not be completely withdrawn from Syria.

“Turkey will soon be moving forward with its long-planned operation into Northern Syria,” the White House said in a statement released just before 11 p.m. in Washington. “The United States Armed Forces will not support or be involved in the operation, and United States forces, having defeated the ISIS territorial ‘Caliphate,’ will no longer be in the immediate area.”

It was unclear how extensive the Turkish operation would be, or whether Turkish forces would clash with the American-backed Kurds, a development that could jeopardize many of the counterterrorism gains achieved by the American military in the fight against ISIS.

Last December, Mr. Trump called for a complete United States withdrawal from Syria, but ultimately reversed himself after a backlash from Pentagon, diplomatic and intelligence officials, as well as important allies in Europe and the Middle East.

Soner Cagaptay, the director of the Turkish Research Program at the Washington Institute for Near East Policy, and author of “Erdogan’s Empire: Turkey and the Politics of the Middle East,” said in a telephone interview that a Turkish incursion uncontested by the United States would allow Turkey to cut another swath into Kurdish-controlled territory in Syria. That would give Mr. Erdogan a ready place to send hundreds of thousands of Syrian refugees and prove yet again his influence with Mr. Trump on Syria policy.

“It’s a quite a significant development,” Mr. Cagaptay said.

Many Syria experts criticized the White House decision and cautioned that American abandonment of its Kurdish allies could widen the eight-year Syrian conflict and prompt the Kurds to ally with the Syrian government of President Bashar al-Assad to combat the much larger and more technologically advanced Turkish army.

“Allowing Turkey to move into northern Syria is one of the most destabilizing moves we can do in the Middle East,” Representative Ruben Gallego, an Arizona Democrat and former Marine who served in the Iraq war, said on Twitter on Sunday night. “The Kurds will never trust America again. They will look for new alliances or independence to protect themselves.”

Mr. Erdogan has demanded a “safe zone” for his nation to run 20 miles deep and 300 miles along the Turkish-Syrian border east of the Euphrates. That area, he has said, would be reserved for the return of at least a million Syrian refugees now inside Turkey. Mr. Erdogan has threatened to send a wave of Syrian migrants to Europe instead if the international community does not support the initiative to send them back to Syria.

Since early August, the American and Turkish militaries have been working together on a series of confidence-building measures — including joint reconnaissance flights and ground patrols — in a 75-mile-long strip of that 300-mile border area.

American-backed Kurdish forces have pulled back several miles and destroyed fortifications in that area.

The pace of these operations has not been fast enough for Mr. Erdogan, and last week he began indicating that he planned to launch an incursion across the border. He did the same thing over the summer, prompting a flurry of American diplomatic activity bolstered by the military confidence-building measures.

Defense Secretary Mark T. Esper and Gen. Mark Milley, the new chairman of the Joint Chiefs of Staff, both called their Turkish counterparts last week to try and reduce tensions. But unresolved threats from Turkey apparently resulted in the decision by Mr. Trump on Sunday.

American officials contacted late Sunday would not say how far back from the Turkish border American troops would redeploy, or whether this signals the beginning of a larger overall withdrawal of the 1,000 American troops now in northeast Syria conducting and supporting counterterrorism operations. Those troops rely on their partnership with the S.D.F. which has 60,000 total fighters, including both Kurdish and Arab militias.

One official, who spoke on condition of anonymity to describe a fluid military situation, said that American forces were pulling back from northeast Syria to “get out of the way.”

Officials described a military and political tension as the American military is pulled between two important allies in the civil war in Syria. Turkey is a major NATO ally, but the Kurdish S.D.F. forces have been a partner in the fight against ISIS.

There has been grave tension over Syria within the administration, as well.

In late December 2018, Defense Secretary Jim Mattis resigned over Mr. Trump’s surprise order of a full withdrawal of 2,000 American troops from Syria. Two days later, Brett McGurk, the special presidential envoy for the coalition to defeat the ISIS, also resigned. In the months afterward, American officials quietly worked behind the scenes to ensure that some level of troops would remain in northeast Syria.

As recently as the week of the United Nations General Assembly summit in late September, senior American officials were saying there was consensus across the United States government, including Mr. Trump, on ensuring the welfare of the Kurdish forces and warding off Turkey’s persistent desire to attack those forces.

But around that same time, Turkish officials were privately saying that they saw things very differently: They said they perceived a sharp division between Mr. Trump and other American officials — most notably generals in the United States Central Command, which oversees troops in the Middle East. While it was clear the generals wanted to bar Turkey from the safe zone and keep American troops there, Mr. Trump clearly wanted the troops out, they said, and in the end he might get his way.

Mr. Erdogan had traveled to New York with the intention of talking about Syria and the Kurds with Mr. Trump in a private meeting. He attended a group dinner hosted by Mr. Trump, but the two did not have a formal meeting there. Mr. Trump did say at one event that Mr. Erdogan had “become a friend of mine.” The telephone call between the two on Sunday might have been organized as a substitute for the meeting that never took place.

“This looks to be another reckless decision made without deliberation or consultation following a call with a foreign leader,” Mr. McGurk said after hearing of Mr. Trump’s decision on Sunday. “The White House statement bears no relation to facts on the ground. If implemented, it will significantly increase risk to our personnel, as well as hasten ISIS’s resurgence.”

Turkish officials pointed to Mr. Trump’s favorable exchanges with Mr. Erdogan during the G20 summit meeting in Japan in June as another sign of a strong relationship between the two leaders. That bilateral meeting was more about a different security flash point between the United States and Turkey — the purchase by Turkey of the Russian S-400 missile defense system. But Mr. Trump has largely brushed that issue aside.

Though Mr. Trump hailed a total defeat of the Islamic State this year — and asserted its territorial demise in Sunday night’s statement — defense officials in the region see things differently, acknowledging that what remains of the terrorist group is here to stay.

Over the past several months, ISIS has made inroads into the sprawling Al Hol tent camp in northeast Syria, and there is no ready plan to deal with the 70,000 people there, including thousands of family members of ISIS fighters.

The custody of all these people could be in jeopardy, American officials said Sunday night, depending on whether any Turkish incursion sets off a much larger conflict in northeast Syria.