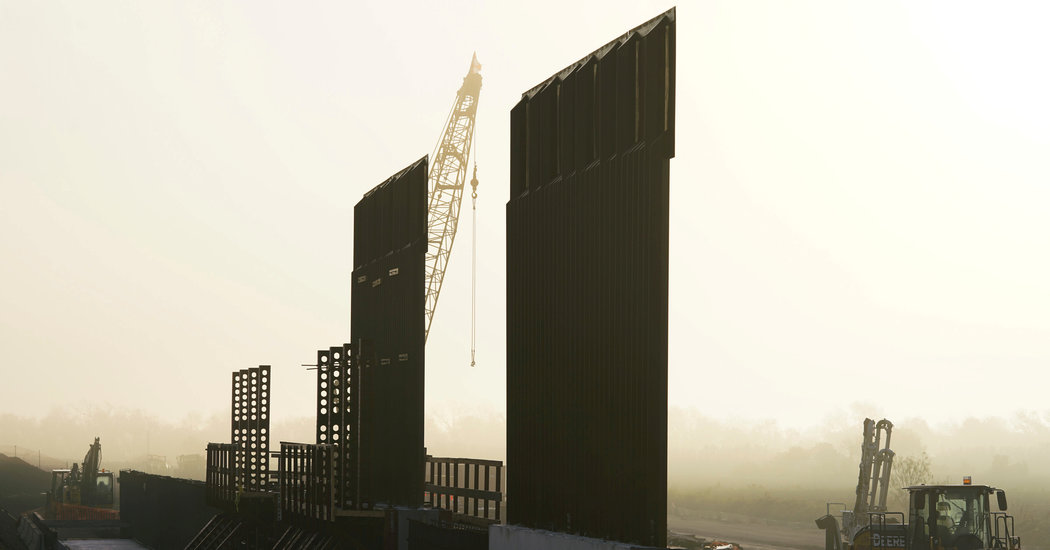 WASHINGTON — President Trump is expected to ask Congress for billions of additional dollars for his wall along the southern border and more immigration enforcement resources as part of his official budget proposal that is set to be released on Monday.

The White House is expected to propose a $4.8 billion budget for fiscal 2021, slightly higher than its $4.75 trillion budget request last year, according to a senior administration official who declined to be identified before the official release. The final budget proposal of Mr. Trump’s first term is expected to reinforce the anti-immigration platform that helped propel him into office and will be a big part of his re-election campaign.

The budget is also expected to forecast trillion-dollar deficits throughout a theoretical second term, as well as another potential round of tax cuts that Mr. Trump has said he wants enacted next year.

The White House budget is generally viewed as a political messaging document and Congress, which is responsible for approving government spending, is under no requirement to adhere to White House requests. Lawmakers have previously rejected many of Mr. Trump’s previous attempts to gut domestic programs, like funding for public radio, libraries and environmental programs.

But this year’s budget will be significant since it will serve as a blueprint for Mr. Trump’s priorities if he wins a second term. And it is likely to presage another clash with Democrats over Mr. Trump’s plans to stop the flow of immigrants across the border.

Mr. Trump plans to ask Congress for an additional $2 billion to fund his border wall, according to people familiar with the plan, pressing ahead with one of his signature campaign pledges.

A senior administration said that the budget would ask for big spending increases on infrastructure, technology and law enforcement personnel, and that the money was needed to “gain operational control” of the border.

Mr. Trump is asking for less than the $5 billion in wall funding that he sought a year ago, which resulted in a five-week government shutdown. Since then, the president has been shifting funds that Congress allocated for military construction projects to pay for the new border barrier.

Congress previously agreed to provide $1.375 billion for wall construction, far less than the $18 billion Mr. Trump asked for in 2018. Last year, after declaring a state of emergency when Congress did not yield on the $5 billion request, the Trump administration diverted about $6.7 billion from military construction funds and other money intended to be used for cracking down on illicit drugs to pay for the wall. It plans to use $7.2 billion of those funds this year.

The shifting of that money has set off a string of legal battles between the Trump administration and opponents of the wall, who argue that the president is wrongfully appropriating funds that were meant for other projects. A federal court ruled in January that some of those funds could be used to build 175 miles of barrier in parts of Texas, Arizona and California.

Mr. Trump’s immigration budget request, which was reported earlier by The Wall Street Journal, is not expected to include money to reimburse the military for funds that the White House reallocated for the wall.

Last month, Mr. Trump drew criticism from Democrats for suggesting during an interview on the sidelines of the World Economic Forum in Davos, Switzerland, that he would consider cuts to so-called entitlement programs such as Social Security and Medicare if he won a second term. He then tried to reverse those comments, saying in a tweet on Saturday that no such cuts would be proposed in the upcoming budget request.

The budget for Medicare will be largely similar to what the White House has proposed in previous years, according to a person familiar with the plan. It will suggest a number of policy changes designed to reduce spending by targeting what officials believe is waste in the program.

Many of the proposed tweaks are identical to proposals from the Obama administration’s budgets for the program. Taken together, the changes would represent around half a trillion dollars in reduced Medicare spending but do not include any major reductions to benefits or eligibility, like those proposed in House budgets when Republicans controlled that chamber.

But on drug prices, an issue the president talks about often, the budget will diverge from previous years. Instead of proposing a suite of specific policy changes, it will instead set a dollar target: $135 billion in savings linked to lower prices over a decade.

A senior administration official said the target was designed as a signal to Congress to negotiate the policy package of its choice. The dollar total is similar to the budget score for a bipartisan bill from Senator Charles E. Grassley, Republican of Iowa, and Senator Ron Wyden, Democrat of Oregon, that Mr. Trump referenced last week in his State of the Union address without specifically endorsing.

That bill passed the Senate Finance Committee but has not received a floor vote. The House recently passed its own bill to lower drug prices, which would save significantly more.

Because of Mr. Trump’s desire to cut taxes and increase military spending, he has not made good on his pledge to reduce the deficit. The Congressional Budget Office said in January that it projected that the United States deficit would top $1 trillion annually over the next 10 years, reaching $1.7 trillion in 2030.

As for the wall, the Trump administration has built about 115 miles of the barrier so far and is behind schedule on its goal to construct 450 miles by 2021. Additional funding will go to building sections that are not yet planned. The White House believes it has the resources to pay for 1,000 miles of wall.

Despite Mr. Trump’s promises in 2016, Mexico has yet to help finance the project.