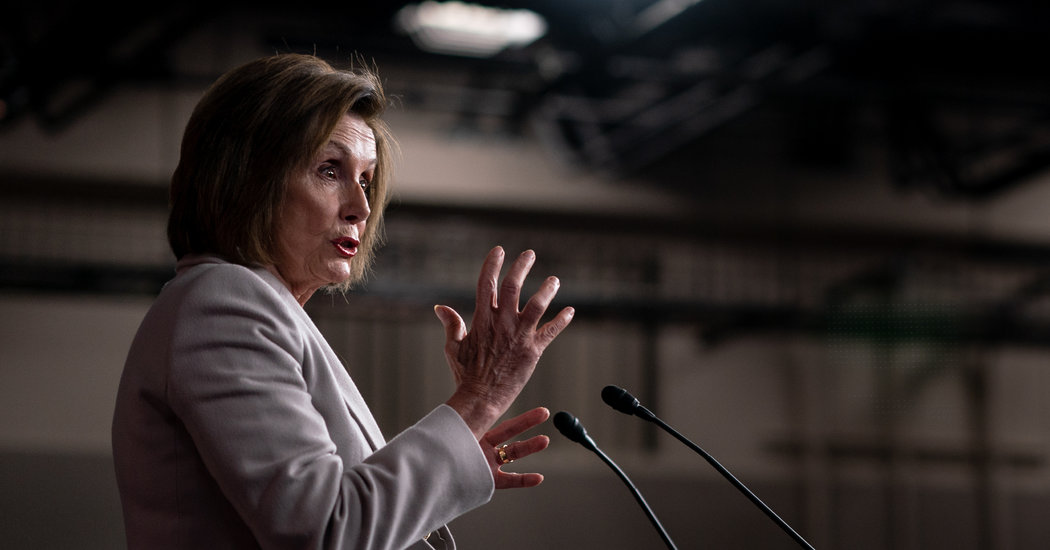 WASHINGTON — House Democrats return to Washington on Monday facing a difficult choice: Should they hand President Trump a victory in the midst of a heated impeachment battle or walk away from one of the most progressive trade pacts ever negotiated by either party?

The Trump administration agreed with Canada and Mexico on revisions to the North American Free Trade Agreement one year ago, but the deal still needs the approval of Congress. A handshake agreement with the administration in the coming days would give the Democratic caucus a tangible accomplishment on an issue that has animated its base. It could also give Democrats a chance to lock in long-sought policy changes to a trade pact they criticize as prioritizing corporations over workers, laying the groundwork for future trade agreements.

Those factors have coaxed Democrats to the table at an improbable moment, when Washington is split by partisan fights and deeply divided over an impeachment inquiry. After months of talks, including through the Thanksgiving break, both sides say they’re in the final phase of negotiations. But Democrats insist the administration must make more changes to the labor, environmental and other provisions before Speaker Nancy Pelosi of California will bring legislation implementing the new United States-Mexico-Canada Agreement to a vote.

“By any standard, what we’ve already negotiated is substantially better than NAFTA,” said Representative Richard E. Neal of Massachusetts, who is heading the Democratic group negotiating with the administration. “Labor enforcement, in my judgment, is the last hurdle.”

The deal presents a dilemma for Democrats because it contains measures they have supported for years, from requiring more of a car’s parts to be made in North America to rolling back a special system of arbitration for corporations and strengthening Mexican labor unions.

In borrowing from the Democrats’ playbook, the revised pact reflects Mr. Trump’s populist trade approach — one that has blurred party lines and appealed to many of the blue-collar workers Democrats once counted among their base. It also reflects a broader backlash to more traditional free trade deals, which have been criticized for hollowing out American manufacturing and eliminating jobs.

“Taken as a whole, it looks more like an agreement that would’ve been negotiated under the Obama administration,” said Senator Rob Portman, Republican of Ohio and a former trade representative during the George W. Bush administration, who supports the pact. “There are some aspects to it that Democrats have been calling for, for decades.”

In fact, it goes so far to the left of traditional Republican views on trade that some congressional Republicans only grudgingly support it — or may vote against the final deal.

Senator Patrick J. Toomey of Pennsylvania, one of the most ardent Republican critics of the deal, has called the pact “a complete departure from the free trade agreements we’ve pursued through our history” and urged fellow Republicans to vote it down.

“If we adopt this agreement, it will be the first time that I know of in the history of the Republic that we will agree to a new trade agreement that is designed to diminish trade,” Mr. Toomey said at a hearing in July, sitting next to a large red sign that said: “NAFTA > U.S.M.C.A.”

Still, most Republicans have supported the pact and urged rapid action. If the deal is not approved soon, proponents fear it could become the target of more frequent attacks by Democratic presidential candidates, making it even more difficult for Democrats in Congress to vote for the pact.

Mr. Trump has spent weeks accusing Ms. Pelosi of being “grossly incompetent” and prioritizing impeachment over a trade deal that could benefit workers. “She’s incapable of moving it,” Mr. Trump said last week, warning that a “great trade deal for the farmers, manufacturers, workers of all types, including unions” could fall apart if the Democrats don’t take action.

While long demonized by Mr. Trump, Democrats and labor unions, NAFTA has become critical to companies and consumers across North America, guiding commerce around the continent for a quarter century. Entire industries have grown up around the trade agreement, which allows goods like cars, avocados and textiles to flow tariff free among Canada, Mexico and the United States.

But Mr. Trump and other critics have blamed the deal for encouraging companies to move their factories to Mexico. The president has routinely called NAFTA the “worst trade deal ever made” and promised during his campaign that he would rewrite it in America’s favor — or scrap it altogether.

The revised pact took over a year of rancorous talks to complete, resulting in a complex 2,082-page agreement covering a wide range of topics. While much of it simply updates NAFTA for the 21st century, it also contains changes intended to encourage manufacturing in the United States, including by raising how much of a car must be made in North America to qualify for zero tariffs.

The new agreement requires at least 70 percent of an automaker’s steel and aluminum to be bought in North America, which could help boost United States metal production. And 40 to 45 percent of a car’s content must be made by workers earning an average wage of $16 an hour. That $16 floor is an effort to force auto companies to either raise low wages in Mexico or hire more workers in the United States and Canada, an outcome Democrats have long supported.

It also rolls back a special system of arbitration for corporations that the Democratic presidential candidate Elizabeth Warren has criticized as allowing companies to bypass the American legal system and Trump administration officials describe as an incentive for companies to send their factories abroad.

The pact also includes, at least on paper, provisions that aim to do away with sham Mexican labor unions that have done little to help workers by requiring every company in Mexico to seek worker approval of collective bargaining agreements by secret ballot in the next four years.

Some Democrats are skeptical that the Mexican government will allocate the necessary funds to ensure that companies are complying with these changes. But if the rules are enforced, Democrats say they may help stem the flow of jobs to Mexico and put American workers on a more equal footing.

Several sticking points remain, including a provision that offers an advanced class of drugs 10 years of protection from cheaper alternatives, which Democratic lawmakers say would lock in high drug prices.

Other Democratic proposals aim to add teeth to the pact’s labor and environmental provisions. Democrats want to reverse a change made by the Trump administration that they say essentially guts NAFTA’s enforcement system. They are also arguing for additional resources that would allow customs officials to inspect factories or stop goods at the border if companies violate labor rules.

Ms. Pelosi, who has continued to suggest that she wants to “get to yes” on the deal, responded to Mr. Trump’s rebuke last week by saying that she needed to see the administration’s commitments in writing before moving forward.

The agreement still has skeptics, including labor leaders and others on the left.

“If the amendments suggested are acceptable improvements, then there’s no reason we should not be shaking hands next week,” he said on Friday, after meeting with Canadian officials.

Some congressional Republicans, who generally oppose unions and believe the deal’s new rules could burden auto companies, have been taken aback by how far the administration has gone to woo Democrats.

At a private lunch on June 11 at the Capitol, Republican senators peppered Vice President Mike Pence with questions about why the administration was not lobbying Democrats harder to back the deal. Mr. Pence claimed that it already had the support of 80 Democrats, a high number that caught some Republicans by surprise, according to a person familiar with the meeting who spoke on condition of anonymity.

“What’s in it for Pelosi?” asked Senator Ben Sasse, Republican of Nebraska.

Mr. Pence responded that the pact had the most aggressive labor and automotive standards ever put in a trade agreement — an admission for some Republicans in the room that it was the worst trade agreement they had been asked to support.

Jennifer Hillman, a trade expert at the Council on Foreign Relations, said many of Mr. Lighthizer and Mr. Trump’s views on trade “are basically borrowing what Democrats have said for many, many years.”

“To the extent that Trump gained votes in the industrial Midwest, it was by espousing Democratic trade ideas,” she said.

Throughout the negotiations, Mr. Lighthizer has kept up a steady dialogue with labor unions like the United Steelworkers and Democrats like Ms. Pelosi, Mr. Neal and Senator Sherrod Brown of Ohio. At times, Mr. Lighthizer appeared more at odds with congressional Republicans and traditional allies like the Chamber of Commerce, who he said should give up “a little bit of the sugar” that had sweetened trade agreements for multinational corporations.

“If you can get some labor unions on board, Democrats on board, mainstream Republicans on board, I think you can get big numbers,” Mr. Lighthizer said in January 2018. “If you do, that’s going to change the way all of us look at these kind of deals.”