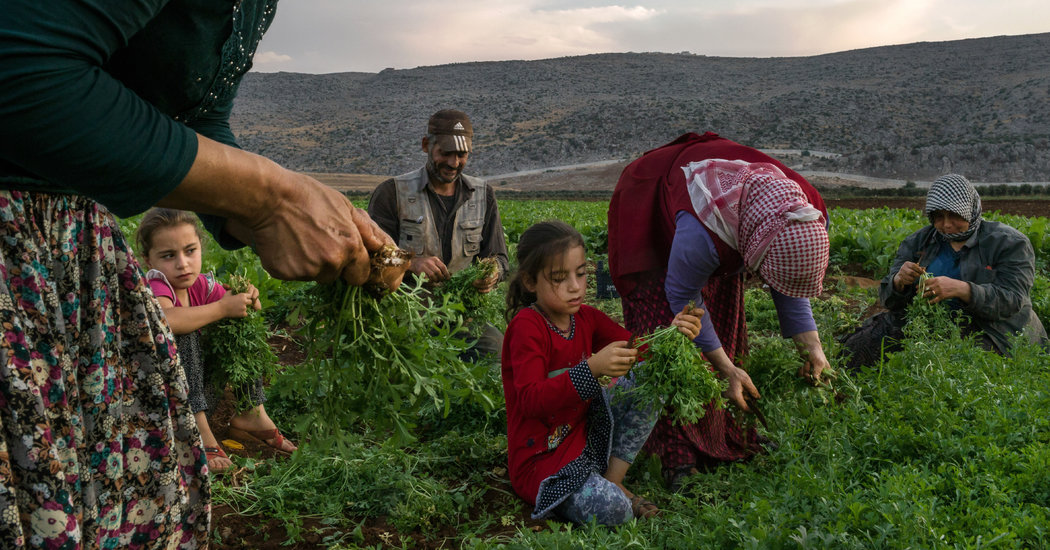 AKCAKALE, Turkey — Syrian refugees in this Turkish border town have been celebrating. Every day, news trickles of advances by Turkish-backed troops in carving out a safe zone in northeastern Syria and opening the way for the refugees to return home.

Syrians like Hassan Khalil, 37, one of eight brothers and several cousins who rent a cluster of houses on the edge of Akcakale and survive by working on nearby farms, are impatient to reclaim their homes.

“We have been away for five years,” he said.

Yet their excitement is tempered with anxiety.

In seizing the enclave in Syria, Turkey wrested a piece of territory along its southern border from the Kurds, who had taken control of the area amid the chaos of the war in Syria.

But Turkey’s invasion resulted in a new problem: Syrian forces — deployed by the very government that had sent refugees fleeing for safety in the first place — promptly moved back into the surrounding area, alarming many of the displaced people desperate to go home.

“We were surprised the regime entered these areas,” said Mustafa Hamida, a Syrian lawyer and rights activist who opposes the government of Syria’s president, Bashar al-Assad. “If the regime comes in, we will see a massive campaign of arrests in the region.”

For Turkey’s president, Recep Tayyip Erdogan, sending troops across the border was not just a matter of repelling the Kurds, whom the Turks view as a threat to their stability. Under political pressure to resolve the refugee crisis, he has insisted on the need for a safe zone to start repatriating some of the 3.6 million Syrians who fled to Turkey.

But with Mr. al-Assad’s forces on the move, and supported by Russian troops, few refugees are likely to go back willingly.

Much of the recent tumult stems from President Trump’s decision to withdraw American forces from northeastern Syria, where they had been allied with the Kurds to fight the Islamic State. The United States is hostile to the Assad government, and its forces also helped keep the Syrian military at bay.

In a sign of continuing conflict in a newly upended northeastern Syria, Turkish forces recently clashed with Syrian soldiers, according to the Syrian Observatory for Human Rights — the first time that had happened since they crossed the border. At least five Syrian government soldiers were killed on Tuesday by Turkish artillery fire, the conflict monitor based in Britain reported.

Turkish-backed Syrian units posted video on social media showing the capture of two Syrian military trucks and three government soldiers in army fatigues. The clashes occurred on the limits of the Turkish-controlled area.

The flood of refugees followed an uprising against the government of President Assad that began in 2011, as the Arab Spring spread across the Middle East. The government’s brutal crackdown on the population led to nationwide calls for his ouster. In the war that followed, more than 100,000 civilians have been killed, and the Assad regime has been accused of using chemical weapons against its own people.

But it was not only the Assad government that sent civilians fleeing.

Mr. Khalil, the refugee in Akcakale, said most of his village had been abandoned since Kurdish forces ordered families to leave nearly five years ago, forcing them to take refuge in Turkey. Even Kurdish families were ordered out of the village, Abdi Koy, as part of a campaign of deliberate displacement of the population and the razing of villages by the Kurdish militia in 2015, according to a report by Amnesty International.

Mr. Khalil accused the Kurdish militia of detaining one of his relatives and using extortion against another.

Mustafa Bali, head of the media office for the Syrian Democratic Forces, as the Kurdish-led force is now named, dismissed allegations of abuse by the militia as “fabrication and lies.” He also denied the accusations made by Amnesty International.

But such accounts are common among Syrian refugees in Turkey and the men fighting alongside Turkish forces, and have stoked refugees’ demands for Turkey to help them regain their homes.

Last week, Mr. Khalil said, Kurdish forces left his village and Syrian forces allied with Turkey took control of it without a fight. His sister, who was hiding for three days inside her house, called him when she saw the soldiers in the street of the village, 10 miles west of Tel Abyad, Syria.

With the Kurdish forces gone, there is growing anger about car bombs and land mines they are said to have left behind, which have caused civilian casualties in the towns and villages taken over by Turkish-backed forces. A recent explosion from a car bomb in Tel Abyad was so powerful that it shook buildings across the border in Akcakale.

The continuing violence is one reason refugees say they are not willing to return to Syria immediately.

But many also wonder what life might look like in the relatively small area Mr. Erdogan has been able to secure for a safe zone. It is roughly 2,000 square miles between the towns of Ras al-Ain and Tel Abyad, and many refugees wonder how they will survive.

“We will be in a prison,” Mr. Khalil said. “Our hope was they would control the whole border line.”

Mr. Erdogan has proposed building 10 towns in the safe zone, with hospitals, schools and industrial sites to accommodate a million people. Printed handouts given to foreign journalists at a news briefing last week declared that Turkey would use international money to cover the cost, which is estimated at $26 billion. It was not clear where that money would come from.

Even if it gives refugees from near the border a chance to return to their lands, the zone offers little to those driven from elsewhere in Syria.

“I don’t think it was meaningful for a resident of Raqqa or Deir al-Zour,” said Fuad Muhammad, a refugee living near the border in Akcakale.

A former employee of the Syrian water ministry in Deir al-Zour, Mr. Muhammad, 32, is blind, and is clinging to the hope of a passage with his family to Western Europe for an eye operation.

He said there was little hope for the future in Syria without a change of leadership. He said that because of his eyesight, he did not join the popular uprising against the Assad government, but that he had supported those who did.

“Even a child knows the solution,” Mr. Muhammad said. “First you have to change the government, and then amend the Constitution. Because all our problems stem from those two things.”

His home city remains divided and dangerous, he said.

Iranian and Russian forces occupy the west bank of the Euphrates River, which runs through the city, and the east bank is occupied by a mix of “gangs, the S.D.F. and ISIS,” he said. Residents worry equally about a return of the Assad government and of the Islamic State, he said.

“Everybody fears everybody,” he said. “The only victims are the people, and they lack medical services, foodstuffs, jobs, water — everything you can imagine.”

Members of the Turkish-backed militias, who have joined forces for the campaign under the banner of the Syrian National Army, remain set on taking the fight far beyond Turkey’s small protected zone.

In a rented apartment in Akcakale, three wounded Syrian fighters predicted that the Syrian government would not be able to maintain control of the northeastern part of the country in the long term.

“There will be more stability if we go as deep as we can,” said one of them, Abu Khalil Sharqiya, 30.

Mr. Sharqiya said he was determined to get home to Deir al-Zour.