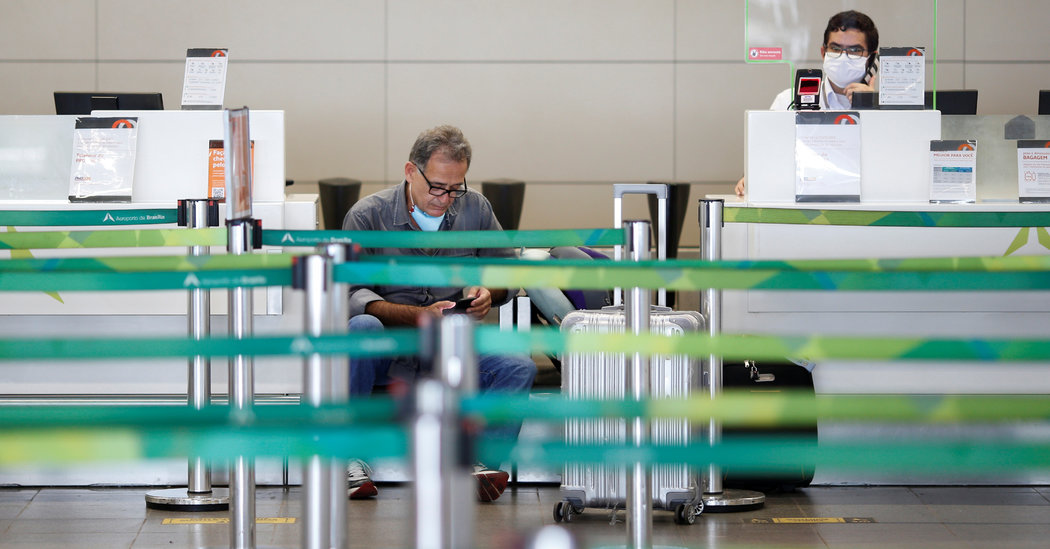 BRASÍLIA — The United States, citing Brazil’s surging coronavirus crisis, has banned flights from the nation, delivering a blow to its embattled leader, who has tried to use his warm relations with President Trump to bolster his political standing.

In recent weeks, coronavirus cases and deaths have exploded in Brazil, Latin America’s most populous country.

Its president, Jair Bolsonaro, a pandemic skeptic, had ignored the warnings of health experts and mocked social distancing measures. Now, Brazil has the second-highest number of confirmed coronavirus infections in the world — trailing only the United States — with more than 350,000 cases and 22,700 deaths.

As hospitals collapsed and mayors and governors begged for help, Mr. Bolsonaro spent recent months fighting the Supreme Court, Congress and even his own ministers. He now finds himself the target of an investigation into whether he shielded his family from corruption inquiries.

American officials said Sunday they were imposing the ban to slow the spread of the disease.

“Today’s action will help ensure foreign nationals who have been in Brazil do not become a source of additional infections in our country,” said the White House press secretary, Kayleigh McEnany.

The new travel restrictions will not affect bilateral trade, she said.

Mr. Bolsonaro’s office declined to comment, but his foreign relations adviser said that the ban had been expected and that it was little more than a formality. “Ignore the hysteria of the press,” the adviser, Filipe Martins, said in a Twitter post.

Although as a practical matter air travel has collapsed during the pandemic, the flight ban imposed by an ally is still a public relations setback for Mr. Bolsonaro, who has seen his ratings slide as the outbreak in Brazil has spun out of control.

Mr. Bolsonaro has repeatedly tried to reap political capital from his ideological affinity with the American president. He has dined with him at Mr. Trump’s Mar-a-Lago resort in Florida and has had telephone calls with the White House. And he has emulated his American counterpart in policy and in style, promoting the use of an unproven drug against the coronavirus and attacking the news media.

Still, Mr. Bolsonaro has found himself repeatedly snubbed by the American government. In recent months, the Trump administration has threatened tariffs on major Brazilian exports and considered vetoing Brazil’s entry into the Organization for Economic Cooperation and Development, a club of the world’s developed economies.

The ban also complicates the outlook for Brazilian airlines, which, like many around the world, are suffering from the collapse in demand.

Before the crisis, the United States was an important destination for Brazilian businessmen and tourists. There were almost 30 direct daily flights between the countries last year.

Now there are just 13 flights a week from Brazil to the United States.