GUANGLU ISLAND, China — Sea cucumbers are like chickens, Cong Xuanzhi explained. He did not mean the taste.

He was describing how sea cucumbers, the unlovely cousins of starfish and sea urchins, end up on the tables of the Chinese today.

“Some are raised in pens,” Mr. Cong said, wearing blue overalls and white rubber boots, and standing outside a long cinder-block building that contained 54 pools filled with sea cucumbers, redolent of the sea. “And some are free range.”

That’s a figure of speech, strictly speaking, since the creatures barely move in their lives. Mr. Cong’s comment, though, highlights yet another consequence of China’s enormous economic transformation, which has lifted millions of people out of poverty and also stoked a voracious appetite for delicacies like the sea cucumber.

In China, sea cucumbers have been highly prized for centuries for their nutritional value and texture, if not their flavor. They are believed to have medicinal properties, treating ailments from arthritis to impotency.

In their wild state, though, they have become a rarity, even on Guanglu Island, off the Liaodong Peninsula, which is famous for them. In a few decades, demand has all but depleted the natural stocks of the local species.

So the authorities have turned to aquaculture — with some of the animals raised in sedentary conditions in pens or ponds near the shoreline, while others are raised in the sea in something approximating their natural habitat. Those are considered free range.

The entire effort is fueling a boom in the local economy that has reshaped the Liaodong coast. 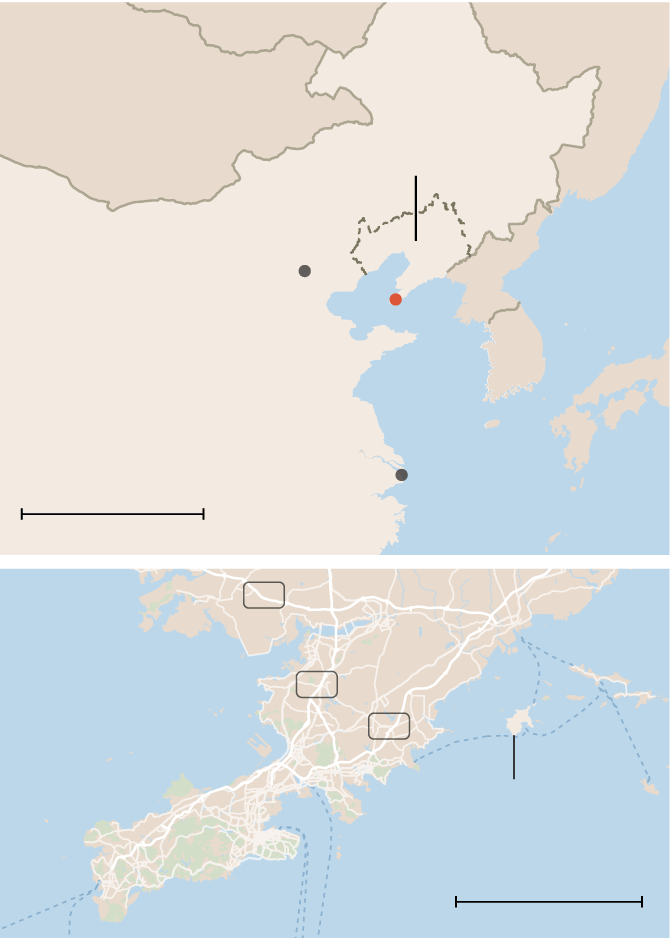 Huge stretches of tidal flatlands northeast of Dalian, the peninsula’s port city, have been carved into patchworks of ponds so vast they are visible in satellite maps.

The ponds, fed by ocean water, are seeded with young sea cucumbers that, within a year, grow large enough to harvest. Farther inland, huge structures like Mr. Cong’s breed sea cucumbers that are destined for tidal ponds nearby or, in his case, as far away as Fujian, the southeastern province.

Some companies breed larvae and seed sections of the open sea with them that the government licenses to harvesting operations.

“People here all rely on this,” said Liu Aiqing, who was recording the weight of the animals that divers pulled out of a nearby pond, larger than a football field. She used to work in a factory.

Sea cucumbers have become the most valuable farmed sea product in China, worth more than $8 billion a year, said Bao Pengyun, a marine biologist whose research at Dalian Ocean University contributed to the development of the industry in China.

They are also good for the environment, feeding off the rocks and sand where they live, purifying the surrounding water. Their eradication would be devastating up and down the food chain.

Homages to the sea cucumber abound in and around Dalian. Restaurants and markets have sea cucumber statues. There is a sea cucumber-themed resort, with hotels, a museum and a cartoon mascot.

One of the most famous seafood restaurants in Dalian, Wanbao Seafood Fang, plays a video of sea cucumbers in an endless loop, including a subtitled clip from Fox News discussing how they might even be a “miracle cure” for cancer.

The Michelin online guide to Chinese cuisine offers this helpful guidance: “A book in the Ming dynasty notes its physical resemblance to men’s genitals, which might contribute to its popularity as an ingredient at that time, given the Chinese belief that one can reinforce a specific part of the body by eating food that are in a similar shape.”

The local variety, the Japanese spiky sea cucumber, is among the seven species of the animal listed as endangered — nine more are considered vulnerable — by the International Union for Conservation of Nature.

By some estimates 70 percent of the world’s edible species of sea cucumbers are over exploited — from the South Pacific to the Mediterranean to the Gulf of Mexico.

Like Mr. Cong and others in the industry, Mr. Bao, the marine biologist, thinks there is little difference between sea cucumbers raised in pens or free range, and those from the wild. “Very much the same,” he said.

“The difference is tangible,” said Mou Jie, who with friends drove two hours up the coast from Dalian to catch a ferry that deposited her nearly an hour later on Guanglu.

She could have bought wild sea cucumbers in Dalian but instead waited in a blustery November chill for a flat-bottomed boat to pull ashore and unload its catch.

Wild sea cucumbers have wider and whiter spikes. Those from colder waters grow more slowly, typically three years instead of one, making them more nutritious.

Here’s another difference: Wild ones, whether fresh, partially processed or dried, cost two to three times as much. The most expensive — dried — can cost almost $1,000 a kilogram.

“If you don’t lack money, you’ll buy this one,” said Yang Yufeng, a vendor at the main wholesale fish market in Dalian, pointing to the most expensive wild sea cucumbers he had.

The sluggish sea cucumbers might be easy to catch, but it is not easy work.

During the peak harvest season, as fall turns into winter, divers plunge into water that is about 48 degrees Fahrenheit, coming up for only short breaks to unload their mesh nets. They are paid according to the weight, and can earn the equivalent of several hundred dollars a day.

Under Chinese law, those harvested by divers here cannot be sold as wild because they come from seeded stock, meaning those partially raised with human help have intermingled with the wild ones.

“We just say that they are sea cucumbers from the deep sea,” said Hao Junze, the chief executive officer of Dalian Caishen Island Group, the company that operates the concessions on the sea floor around Guanglu.

Mr. He said his company has not seeded the area since 2013, effectively restoring it to something like the wild it once was. Our stock, he said, “is naturally breeding on its own.”

Ms. Mou and her friends bought about 800 fresh sea cucumbers, enough to last the whole winter, and watched in the cold as three workers gutted the animals with box cutters and piled them in a heaping, muddy mess.

So about the taste: Haters, and there are many, say sea cucumbers are flavorless and have the texture of cartilage or, worse, rubber.

In short, not bad at all.

Steven Lee Myers is a veteran diplomatic and national security correspondent, now based in the Beijing bureau. He previously worked as a correspondent in Moscow, Baghdad and Washington and is the author of “The New Tsar: The Rise and Reign of Vladimir Putin,” published by Alfred A. Knopf in 2015.