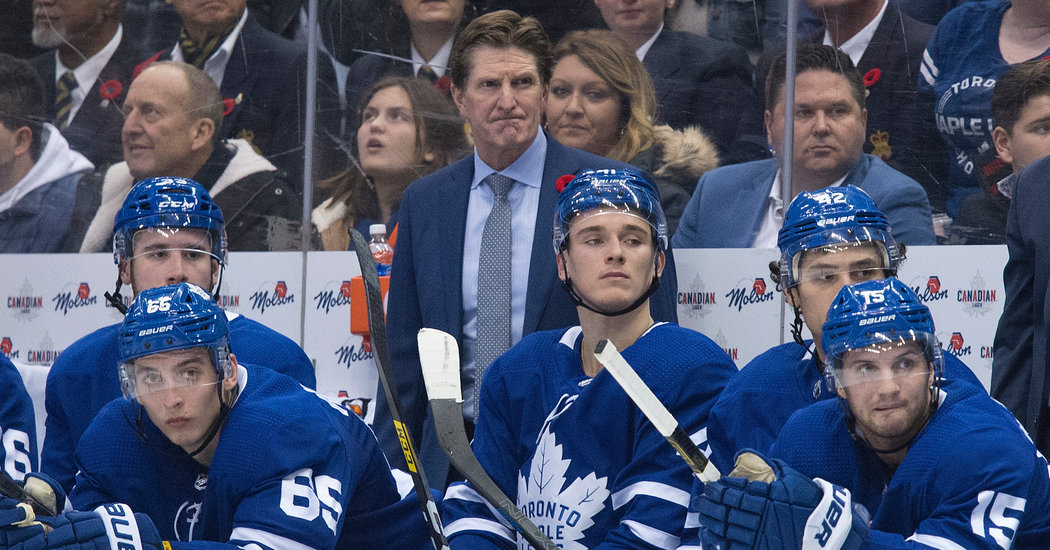 TORONTO — If there is one thing most hockey observers can agree on, it’s that coaching the Toronto Maple Leafs is a perilous job.

Mike Babcock, who was fired on Wednesday after four-plus years with the team, was the sixth Leafs coach to be dismissed since 2006, following Peter Horachek, Randy Carlyle, Ron Wilson, Paul Maurice and Pat Quinn. To replace Babcock, the team promoted Sheldon Keefe from its American Hockey League affiliate, the Toronto Marlies.

The former N.H.L. general manager Craig Button attributed Toronto’s long list of coach firings to an imbalance between performance and expectations in a city that has been aching for a Stanley Cup since 1967.

“When the expectations exceed what the reality is, I think that always creates some unfair criticism of the coach,” Button said.

The truth is that coaching anywhere in the N.H.L. has become perilous. Last year, for instance, four coaches were fired in November.

But Toronto is a particularly impatient market. Its titleless streak is the longest active drought in the N.H.L. The Maple Leafs had been tied with the St. Louis Blues, who last season won the Stanley Cup for the first time in their 52-year history.

In the first two months of this season, Babcock’s Leafs were 9-10-4, which had them sitting at 10th in the Eastern Conference standings. They were riding a six-game winless streak when Babcock was fired.

Brian Burke, former general manager of the Leafs, understands the pressure of Toronto. When the chants of “fire Wilson” became too loud in March 2012, Burke fired his good friend.

Less than a year later, Burke, too, would be fired.

Now a television analyst for Sportsnet, Burke said the news media tended to add to the pressure.

“The problem is when the team struggles, all 80 to 100 of those media people pick up a rock and throw it,” he said, adding: “The biggest art to coaching or managing here is to tune out the white noise. And social media makes it very hard, much more difficult than it was 15 years ago.”

Paul Dennis, a sports psychologist, worked with the Leafs as a development coach from 1989 until 2009 and saw a number of coaches fired.

He used to advise the coaches to practice what they preached to the players: Tune out the things out of your control.

“So your job is to focus on tactics and strategies to get the best out of your players for the next game,” Dennis said. “It’s easy to say, but as long as you can do that, you’ve got a chance.”

Several days ago, amid rumors of his imminent firing, Babcock said, “If my kids were young, I’d never coach in Toronto.”

The implication was that he would not have wanted to put his young children through the turmoil in this success-starved hockey market.

For years the Leafs had trouble attracting elite free agents, and many players, including Phil Kessel and Larry Murphy, found more success when they left. (In a surprise, John Tavares, a native of the area, signed with the team last season.)

Babcock, 56, was widely considered the best coach in hockey. He won a Stanley Cup in Detroit in 2008 and led Canada to back-to-back Olympic gold medals, although in each case he had an elite lineup.

It seemed as if Babcock was the answer. In 2015 he was awarded an eight-year contract worth a reported $50 million.

But below the surface were reports that General Manager Kyle Dubas and Babcock had clashed over coaching philosophy and roster construction. Dubas preferred a lineup of speed, and Babcock wanted a grinding type of player. Dubas handed out rich contracts to the team’s young star forwards — Auston Matthews, William Nylander and Mitch Marner — and there was little salary cap space to add the grit to the lineup that Babcock wanted. Over time, his favorites were moved out.

And it was no secret that some players chafed at Babcock’s domineering ways, which the former Leafs player Carlo Colaiacovo, who was briefly coached by Babcock in Detroit, characterized as “stubborn.”

Then there was the team’s awkward front-office structure, which may have exacerbated its problems.

Brendan Shanahan, the Maple Leafs’ president, hired Babcock before choosing a general manager, even though traditionally the general manager hires the coach to ensure that they share a vision.

“It’s flawed at its most crucial element,” said Button, the former general manager of the Calgary Flames. “A coach-G.M. relationship is imperative to success. To me, you create unnecessary conflict when you do it the other way around. Shanahan has to take some of the blame. You’re foisting people on each other.”

If Babcock wasn’t the answer, who is? Shanahan and Dubas have put their faith in Keefe, 39, who had not coached an N.H.L. game before Thursday night, when Toronto beat the Arizona Coyotes in Phoenix, 3-1.

The pressure now shifts to Dubas, 33, who made a name for himself as an analytics guru with the Soo Greyhounds of the Ontario Hockey League. Dubas hired Keefe to coach the Greyhounds in December 2012, and Keefe turned around a faltering team. He coached the Marlies to a Calder Cup championship in 2018.

Keefe is closer in age to Dubas and may be able to communicate better with the younger players.

“I think he’s young enough that he can identify with today’s player more so than Mike,” Dennis said. “Today’s players are different. Managing egos and ice time are probably more important than strategies and tactics.”