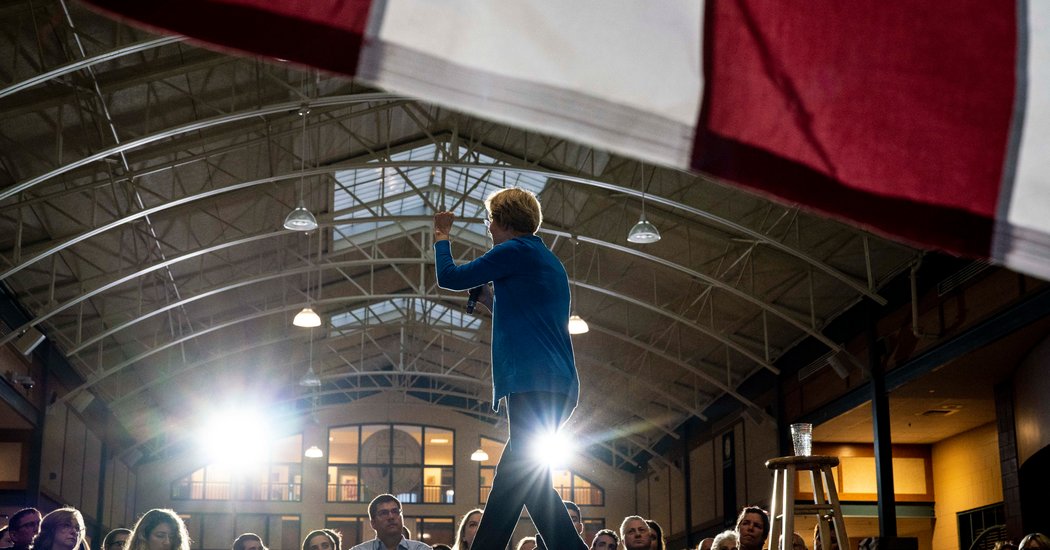 WASHINGTON — Senator Elizabeth Warren’s proposed wealth tax would slow the United States economy, reducing growth by nearly 0.2 percentage points a year over the course of a decade, an outside analysis of the plan estimates.

The preliminary projection from the Penn Wharton Budget Model, which will be unveiled on Thursday in Philadelphia, is the first attempt by an independent budget group to forecast the economic effects of the tax that has become a centerpiece of Ms. Warren’s campaign for the Democratic presidential nomination.

The assessment found that if the tax raised as much new federal revenue as Ms. Warren intends, and if the proceeds went toward reducing the federal debt, annual economic growth would slow from an average of 1.5 percent to an average of just over 1.3 percent over a decade.

To put the finding in context: Penn Wharton estimated in 2017 that President Trump’s tax cut would increase economic growth by roughly 0.06 percentage points per year over a decade, an effect that was much smaller than White House officials predicted. Its estimate of Ms. Warren’s policy implies the wealth tax would have an effect that is three times as large as the Trump tax cuts — but in the opposite direction.

Economists who favor Ms. Warren’s plan say the analysis does not accurately account for the benefits to economic growth from the new government spending programs she would fund with the tax revenue, including universal child care, increased education funding and student loan forgiveness.

Ms. Warren’s plan would impose an annual tax of 2 percent on assets held by Americans, including stocks and real estate, that total more than $50 million. It would add an additional 1 percent tax on assets of more than $1 billion. Ms. Warren has said her plan would raise nearly $3 trillion over a decade.

The proposal has drawn fierce criticism from wealthy Americans, including several titans of Wall Street. Ms. Warren has delighted in those complaints, splicing some of them into a campaign commercial that she is set to air on the financial news network CNBC this week.

“I’ve heard that there are some billionaires that don’t support this plan,” Ms. Warren says in the ad, which proceeds to deride several of the plan’s critics for financial ties to Republicans. “All we’re saying,” she says in conclusion, “is when you make it big, pitch in two cents so everybody else gets a chance to make it.”

Ms. Warren’s campaign worked with Emmanuel Saez and Gabriel Zucman, two economists at the University of California, Berkeley, who support a wealth tax, to estimate how much money it could raise over a decade. But they did not produce what economists call a dynamic analysis, which estimates how the proposal would ripple through the economy and affect growth.

Evaluating a wealth tax in that manner has proved challenging for budget analysts, who are more accustomed to estimating the effects of changes in individual or corporate income tax rates. Thursday’s release is essentially a rough cut of Penn Wharton’s attempt to track the overall economic impact; a fuller version will come in December. For the preliminary analysis, researchers assumed that Mr. Saez and Mr. Zucman’s $3 trillion revenue forecast was correct.

The Penn Wharton Budget Model estimated that wealthy Americans would consume more and save and invest less in order to avoid accumulating wealth that would be subject to the tax. The resulting drop in investment reduces economic growth.

“The wealth tax shrinks the economy because saving is more expensive,” said Richard Prisinzano, Penn Wharton’s director of policy analysis. “The results also suggest that the negative effect of the tax increases as the tax rate increases.”

The model did not assess growth effects from Ms. Warren’s spending plans. Instead, it assumed that the tax revenue would be used to reduce the national debt, a move that encourages growth in the Penn Wharton simulation but not enough to counteract the drag on investment.

Mr. Zucman said in an interview that the analysis did not take into account Ms. Warren’s spending plans, which he said would most likely bolster savings, investment and labor-force participation — and, with them, growth.

“If the government collects $3 trillion in wealth tax revenue, and spends $3 trillion on public infrastructure,” he said, “it’s unclear that there should be a reduction” in the amount of overall investment in the economy.

Another economist who has evaluated Ms. Warren’s plans at her request, Mark Zandi of Moody’s, wrote on Wednesday that his analyses suggested that her spending on “child care, housing and green manufacturing would spur economic growth and produce more tax revenue.”

Asked for comment on the analysis, the Warren campaign pointed to Mr. Zandi’s comments.

Many other economists have criticized the Warren campaign’s estimates of how much revenue her wealth tax could raise. They say that the wealthy may own fewer assets than Mr. Zucman and Mr. Saez estimate, and that wealthy Americans are likely to evade the tax more successfully than the Warren campaign predicts.

One such critic, Natasha Sarin of the University of Pennsylvania’s law school, said in an interview that she anticipated the wealth tax would raise only about a quarter of the revenue that Mr. Saez and Mr. Zucman predicted. If she is correct, she said, the wealth tax would drag less on growth than the Penn Wharton researchers found.

By using the Warren campaign’s numbers, she said, “you end up assuming an impact on the economy that is significantly larger than the impact that would actually ensue.”